Development of offshore wind energy in the U.S. requires oceangoing vessels for turbine installation and other tasks. These vessels may need to comply with the Jones Act, which requires that vessels carrying merchandise between two points in the U.S. be built and registered in the U.S.

Currently there are no U.S.-built specialized ships for installing wind turbines. Stakeholders pointed to uncertainty of federal approval for projects as a challenge to pursuing investments in these ships, which may cost up to $500 million in the U.S.

Interior Department officials said they plan to decide on the nation's first large project in Dec. 2020.

Wind turbine installation vessels have a large deck, legs that allow the vessel to lift out of the water, and a tall crane to lift and place turbines. 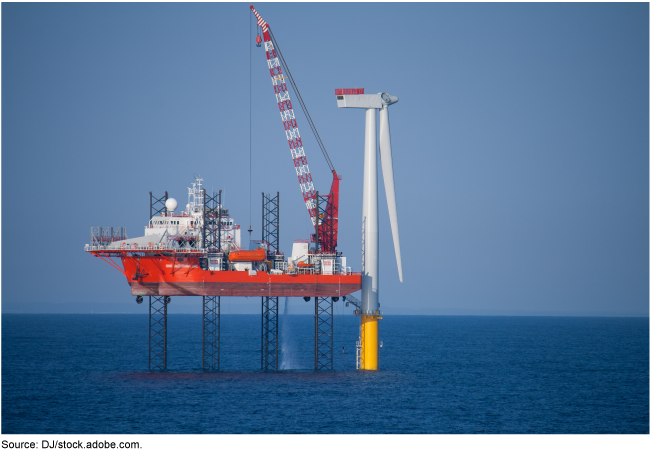 Under the Jones Act, vessels carrying merchandise between two points in the U.S. must be built and registered in the United States. Developers are planning a number of offshore wind projects along the U.S. east coast, where many states have set targets for offshore wind energy production. Stakeholders described two approaches to using vessels to install offshore wind energy projects in the U.S. Either approach may lead to the construction of new vessels that comply with the Jones Act. Under one approach, a Jones Act-compliant wind turbine installation vessel (WTIV) would carry components from a U.S. port to the site and also install the turbines. WTIVs have a large deck, legs that allow the vessel to lift out of the water, and a tall crane to lift and place turbines. Stakeholders told GAO there are currently no Jones Act-compliant vessels capable of serving as a WTIV. One company, however, has announced a plan to build one. Under the second approach, a foreign-flag WTIV would install the turbines with components carried to the site from U.S. ports by Jones Act-compliant feeder vessels (see figure). While some potential feeder vessels exist, stakeholders said larger ones would probably need to be built to handle the large turbines developers would likely use.

Offshore wind, a significant potential source of energy in the United States, requires a number of oceangoing vessels for installation and other tasks. Depending on the use, these vessels may need to comply with the Jones Act. Because Jones Act-compliant vessels are generally more expensive to build and operate than foreign-flag vessels, using such vessels may increase the costs of offshore wind projects. Building such vessels may also lead to some economic benefits for the maritime industry. A provision was included in statute for GAO to review offshore wind vessels.

This report examines (1) approaches to use of vessels that developers are considering for offshore wind, consistent with Jones Act requirements, and the extent to which such vessels exist, and (2) the challenges industry stakeholders have identified associated with constructing and using such vessels to support U.S. offshore wind, and the actions federal agencies have taken to address these challenges.

GAO analyzed information on vessels that could support offshore wind, reviewed relevant laws and studies, and interviewed officials from federal agencies and industry stakeholders selected based on their involvement in ongoing projects and recommendations from others.