Based on the principles of openness and accountability in government, the Freedom of Information Act (FOIA) requires federal agencies to provide the public access to government records and information. The act also specifies exemptions, e.g., information can be withheld for national security or personal privacy concerns.

Agencies can also cite other federal laws to exempt certain information from release. Use of these exemptions more than doubled from FY2012 to FY2019, even as the number of FOIA requests processed only increased by about 32%. A federal law that makes U.S. visa issuance records confidential was the most commonly cited law. 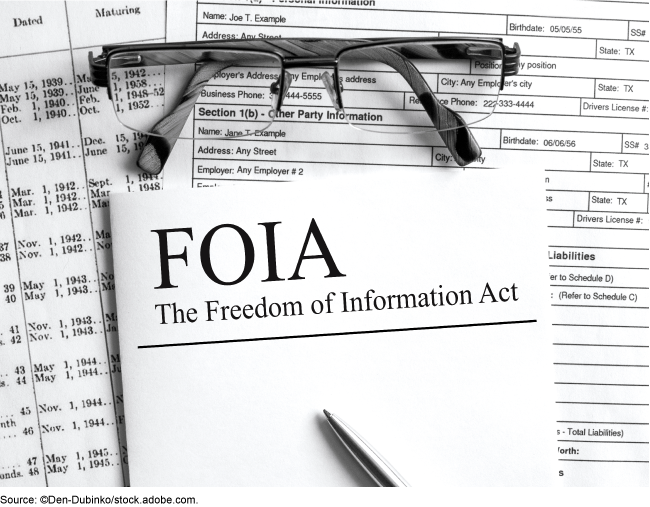 In fiscal years 2010 through 2019, federal agencies claimed a total of 256 statutes as the basis for withholding requested information using Freedom of Information Act (FOIA) exemptions known as (b)(3) exemptions. During this time, 91 agencies reported withholding information using at least one of the 256 statutes a total of more than 525,000 times. The most-commonly used statute related to withholding records pertaining to the issuance or refusal of visas to enter the United States (8 U.S.C. § 1202(f)).

Agencies' use of (b)(3) exemptions more than doubled from fiscal year 2012 to fiscal year 2019 while the number of FOIA requests processed increased 32 percent. At the same time, full denials of requests based on a statutory exemption increased by 10 percent and partial denials, when an agency provided the requester with some, but not all, of the information requested, increased by 76 percent. 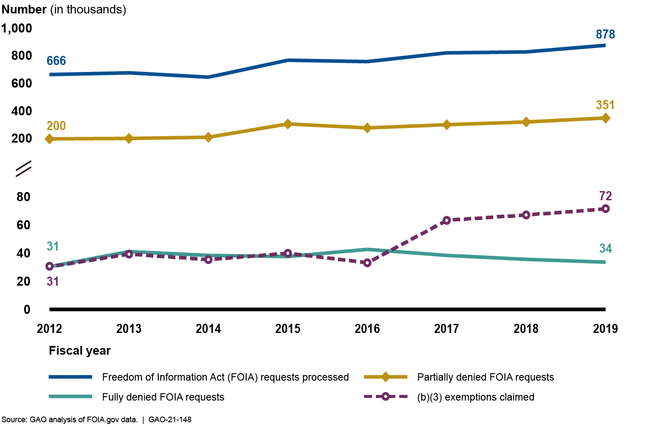 FOIA requires federal agencies to provide the public with access to government records and information based on the principles of openness and accountability in government. FOIA also specifies nine exemptions agencies may cite to withhold information when responding to FOIA requests. These exemptions cover information related to national defense or foreign policy; internal agency personnel rules and practices; certain nondisclosure provisions in other statutes; trade secrets and commercial information; privileged interagency or intra-agency memorandums; personal privacy; law enforcement; the regulation of financial institutions; and geological information. FOIA's exemption 3, also referred to as the (b)(3) exemption, specifically authorizes withholding information on the basis of another federal statute that prohibits disclosure of that information.

GAO reviewed FOIA data reported by agencies for fiscal years 2010 through 2019; updated the catalog of (b)(3) statutes GAO reported in June 2018 to include fiscal years 2017 to 2019; reviewed relevant documentation; and interviewed Department of Justice officials.