Federal onshore oil and gas leases generate about $3 billion a year in federal revenues. Leases are sold in competitive auctions. If there aren't adequate bids in an auction, leases can be sold noncompetitively.

Leases that sold for at least $100 an acre generated 3 times the royalties of all other leases combined during their first 10 years.

Management of federal oil and gas resources remains an issue on our High Risk List. 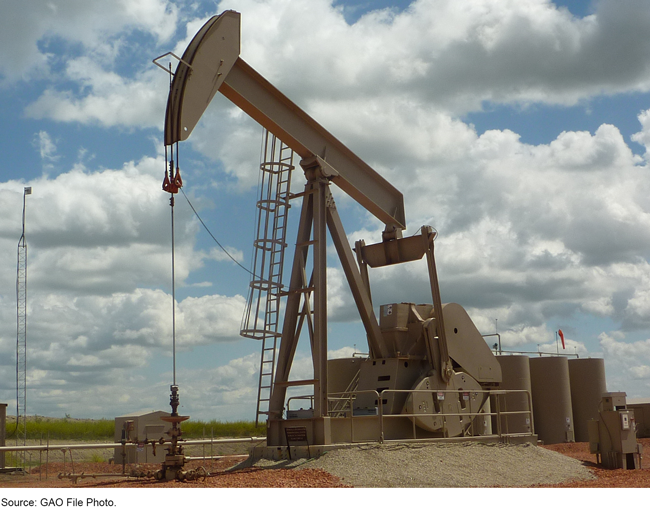 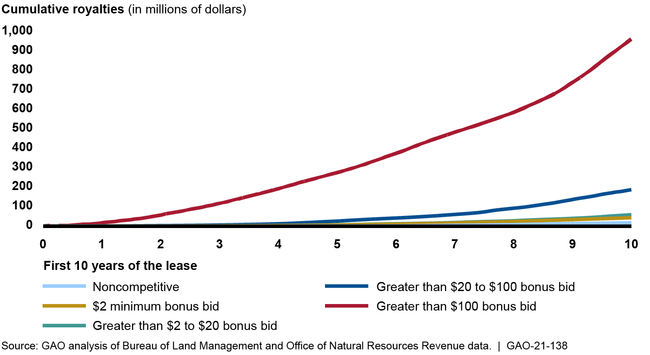 According to BLM, federal onshore oil and gas leases generate about $3 billion annually in federal revenues, including royalties, one-time bonus bid payments, and rents. The Federal Onshore Oil and Gas Leasing Reform Act of 1987 requires that public lands available for oil and gas leasing first be offered under a competitive bidding process. BLM offers leases with 10-year primary terms competitively through auction or, if the tract of land does not receive an adequate bid, noncompetitively for a fee. The minimum bid is $2 per acre, and bids at or above the minimum are called bonus bids.

ONRR is to collect revenues from oil and gas leases in accordance with the specific terms and conditions outlined in the leases, including revenues from rents and royalties. Lessees are to pay rent annually until production begins on the leased land and then pay royalties as a percentage of oil and gas production. Lease terms may be extended beyond the primary term if, for example, the lease is producing oil or gas.

GAO was asked to review oil and gas leasing on federal lands. This report describes oil and gas revenues from competitive and noncompetitive leases for fiscal years 2003 through 2019.

GAO analyzed federal lease and revenue data and interviewed Interior officials and four experts knowledgeable about federal oil and gas leasing. To consistently compare leases over their lifecycle, GAO analyzed revenues that occurred within the leases' primary term (first 10 years) for leases that started in fiscal years 2003 through 2009.