The Fair Labor Standards Act established wage and overtime protections for workers. To enforce it, Department of Labor investigations target low-wage industries with records of violations and employees who are unlikely to file complaints.

The Department's investigations found that workers were due nearly $100 million more in back wages in 2019 than they were owed in 2010. However, the Department declined to pursue about 20% of complaints from 2014-2019. This rate varied widely by region. The Department doesn't systematically track why it declines to pursue complaints.

We recommended doing so to help the Department better direct its resources. 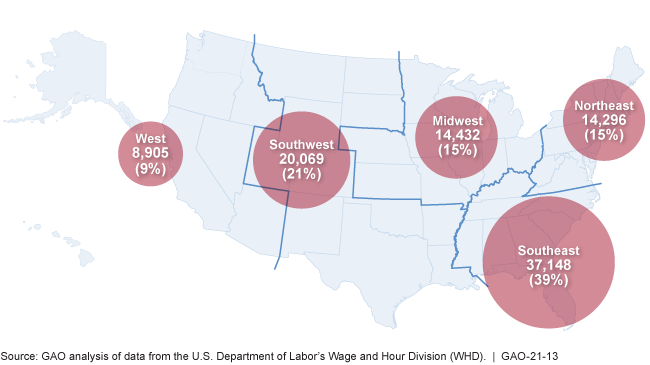 Over the past 10 years, the number of Fair Labor Standards Act (FLSA) minimum wage and overtime cases has generally ranged between 23,000 and 30,000 each year. The compliance actions the Department of Labor's (DOL) Wage and Hour Division (WHD) used to address these cases primarily involved either on-site investigations or conciliations that seek a resolution between the employer and the worker by phone. Back wages due to workers for FLSA minimum wage and overtime violations increased from $129 million in fiscal year 2010 to $226 million in fiscal year 2019. Although the number of WHD investigators decreased by 25 percent from 2010 to 2019, WHD maintained its casework by using procedural flexibilities, such as not investigating low-priority complaints and by distributing work across offices to balance workloads.

From fiscal years 2014 through 2019, most of WHD's FLSA compliance actions were targeted at priority industries—those WHD identified as low-wage, high violation industries that employ workers who are unlikely to file wage or overtime complaints, such as food services. In 2011, WHD developed a list of 20 priority industries, and encouraged its regional and district offices to focus on these industries by setting and monitoring performance goals as part of its annual enforcement planning process. The percentage of FLSA compliance actions involving the priority industries increased from 75 to 80 percent from fiscal years 2014 through 2019, according to DOL data.

WHD uses several strategies, including supervisory reviews, to address FLSA complaints consistently, but does not track uniform data needed to ensure that the reasons complaints are filed with no WHD compliance action are applied consistently. WHD may file complaints without completing a compliance action because they are not within WHD's jurisdiction or for other reasons, such as that they are determined to be low-priority. GAO found that WHD filed about 20 percent of FLSA complaints with no compliance action from fiscal years 2014-2019 and the percent varied considerably (from 4 to 46 percent) among district offices (see figure). WHD lacks uniform data on the reasons complaints are filed with no compliance action at intake or the reasons cases are dropped after initial acceptance because there is no data field in WHD's enforcement database that can be used to systematically aggregate that information. Absent this data, WHD is less able to ensure that a consistent process is applied to complaints.

Note: WHD filed about 20 percent of FLSA complaints with no compliance action from fiscal years 2014-2019, and the percent varied considerably among its district offices.

The FLSA sets federal minimum wage and overtime pay requirements for millions of U.S. workers. WHD may investigate worker complaints of FLSA violations or initiate investigations in industries it prioritizes for enforcement. GAO was asked to review WHD compliance actions.

GAO recommends DOL's WHD develop a method for systematically aggregating and reviewing data on the reasons complaints are filed with no compliance action or cases are dropped. DOL agreed with GAO's recommendation and stated it would take action to address it.