Treasury's Fiscal Service borrows the money for federal operations. It reports the debt in a financial statement called the Schedule of Federal Debt.

We audit and issue an opinion annually on the Schedules and related internal controls (e.g., transactions are properly authorized and recorded). In FY20, we found the Schedules to be reliable. Also, Fiscal Service maintained effective internal control over financial reporting related to the debt, although controls over information systems could be improved.

2020 Federal Debt of the U.S. Government 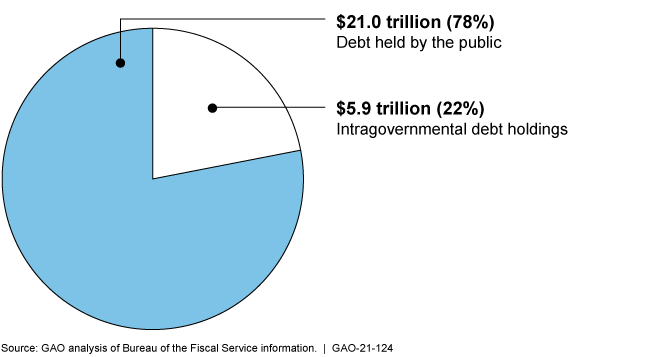 In GAO's opinion, the Bureau of the Fiscal Service's (Fiscal Service) Schedules of Federal Debt for fiscal years 2020 and 2019 are fairly presented in all material respects, and although internal controls could be improved, Fiscal Service maintained, in all material respects, effective internal control over financial reporting relevant to the Schedule of Federal Debt as of September 30, 2020. GAO's tests of selected provisions of applicable laws, regulations, contracts, and grant agreements related to the Schedule of Federal Debt disclosed no instances of reportable noncompliance for fiscal year 2020. Although Fiscal Service made progress in addressing prior year deficiencies, unresolved information system controls deficiencies continued to represent a significant deficiency in Fiscal Service's internal control over financial reporting, which although not a material weakness, is important enough to merit attention by those charged with governance of Fiscal Service.

Debt Held by the Public in Fiscal Year 2020

The primary factor for the significant increase in debt held by the public was the federal deficit, which was reported as $3,132 billion for fiscal year 2020—up from $984 billion for fiscal year 2019. The deficit increased primarily because of the economic disruptions caused by the COVID-19 pandemic and the additional spending by the federal government in response. The increase in debt held by the public was greater than the deficit primarily because of increases in the government's cash balance given the uncertainty of COVID-19–related outflows. The Department of the Treasury (Treasury) met its borrowing needs by initially increasing auction sizes for regularly scheduled short-term bills and increasing the issuance of cash management bills (CMB). From mid-March to September 30, 2020, Treasury issued 116 CMBs, compared to five CMBs during fiscal year 2019. Starting in May 2020, Treasury also began shifting its financing to longer-term securities, including the reintroduction of the 20-year bond in June.

Debt Held by the Public over Time

As a share of gross domestic product (GDP)—an approximation of the overall size of the economy—debt held by the public increased from about 79 percent at the end of fiscal year 2019 to about 100 percent at the end of fiscal year 2020. The ratio of debt to GDP is used to gauge a country's ability to pay its debt. The increase in the ratio reflects not only the rise in debt held by the public but also the decline in GDP as the economy entered a recession in February 2020.

As GAO has previously reported, in the longer term, federal spending is projected to increase more rapidly than revenue. Federal spending on health care is a key driver of projected growth in spending because of greater enrollment, particularly in Medicare, and increasing expenditures per beneficiary. In addition, in the longer term, interest on debt held by the public is projected to increase overall and as a share of the federal budget as debt grows—from the imbalance between spending and revenues—and interest rates rise. The structural imbalance between the federal government's spending and revenue that is built into current law and policy is projected to lead to continued growth in debt held by the public as a share of GDP.

As GAO testified in October 2020, the long-term fiscal challenges facing the United States have been complicated by the COVID-19 pandemic and actions taken in response. Absent action to address the growing imbalance between spending and revenue, the federal government faces unsustainable growth in its debt. GAO has previously stated that the federal government needs a long-term plan to help put it on a sustainable fiscal path. Once the current crisis abates, having a long-term plan with clear goals and objectives agreed to by Congress and the administration, as well as strategies for achieving those goals and objectives, would provide transparency over the fiscal impacts of budget decisions for each year as well as over the long term. GAO has suggested that Congress consider including fiscal rules and targets—such as a debt-to-GDP target—and alternative approaches to the debt limit—such as linking action on the debt limit to the budget resolution—as part of a long-term fiscal plan.

Federal debt managed by Fiscal Service consists of Treasury securities held by the public and by certain federal government accounts, referred to as intragovernmental debt holdings.

Debt held by the public primarily represents the amount the federal government has borrowed to finance cumulative cash deficits and is held by investors outside of the federal government—including individuals, corporations, state or local governments, the Federal Reserve, and foreign governments. The majority of debt held by the public consists of marketable Treasury securities, such as bills, notes, and bonds that are sold through auctions and can be resold by whoever owns them.

Intragovernmental debt holdings represent debt owed by Treasury to federal government accounts—primarily federal trust funds such as Social Security and Medicare—that typically have an obligation to invest their excess annual receipts (including interest earnings) over disbursements in federal securities.

The total amount of federal debt that can be outstanding at one time is subject to a legal limit known as the debt limit. However, the debt limit is not a control on debt but rather an after-the-fact measure that restricts Treasury's authority to borrow to finance the decisions already enacted by Congress and the President. Delays in raising the debt limit have created uncertainty and disruptions in the Treasury market and increased borrowing costs. On August 2, 2019, the Bipartisan Budget Act of 2019 suspended the debt limit through July 31, 2021, thereby covering all of fiscal year 2020. Absent action to increase or suspend the debt limit by the end of the current suspension period, on August 1, 2021, the debt limit will be increased to the amount of qualifying federal debt securities outstanding on that date.