We found that repealing the ban was associated with:

Expanding the market for U.S. crude oil to overseas buyers 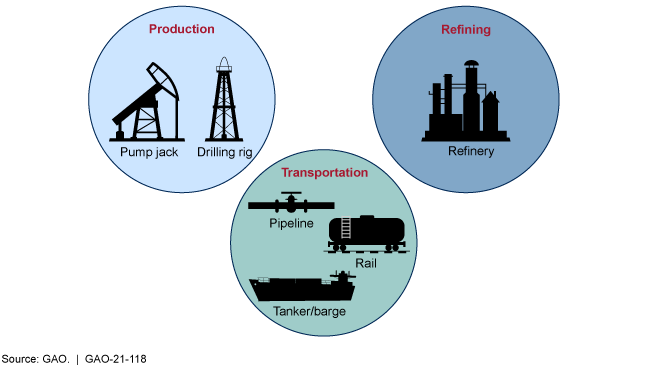 GAO's analysis of U.S. Energy Information Administration (EIA) data and interviews with industry stakeholders shows that the repeal of the U.S. crude oil export ban is associated with increased crude oil exports—from less than half a million barrels per day in 2015 to almost 3 million barrels per day in 2019. The repeal of the ban expanded the market for U.S. crude oil to overseas buyers and, along with other market factors, allowed U.S. crude oil producers to charge higher prices relative to comparable foreign crude oil. Higher prices and an expanded market for U.S. crude oil further incentivized domestic crude oil production, which had been growing since the shale oil boom began around 2009 (see figure). During the period after the repeal, total U.S. imports of crude oil remained largely unchanged.

GAO's analysis found limited effects associated with the repeal of the ban on the production, export, and import of domestic refined petroleum products, such as gasoline. However, profit margins—which are determined in part by the costs a refiner pays for the crude oil and the earnings a refiner receives from the sale of refined products—likely decreased as the prices refiners paid for domestic crude oil increased relative to international prices. Because gasoline prices are largely determined on the global market, U.S. refiners could not pass on to consumers the additional costs associated with the increase in crude oil prices, resulting in decreased profit margins for U.S. refiners.

Finally, after the repeal of the crude oil export ban, the U.S. shipping industry experienced a decline as demand fell for U.S. tankers—known as Jones Act tankers—used to move domestic crude oil between U.S. ports. The increase in the relative price of domestic crude oils associated with the repeal of the export ban may have resulted in some U.S. refineries deciding to use more foreign crude oil. Foreign crude oil is typically transported by foreign tankers, reducing the demand for Jones Act tankers compared to what it would have been if the export ban had remained in place, according to six of the seven shipping industry stakeholders GAO interviewed.

Between 1975 and the end of 2015, the Energy Policy and Conservation Act directed a ban on nearly all exports of U.S. crude oil. This ban was not considered a significant policy issue when U.S. oil production was declining and import volumes were increasing. However, U.S. crude oil production roughly doubled from 2009 to 2015, due in part to a boom in shale oil production made possible by advancements in drilling technologies. In December 2015, Congress effectively repealed the ban, allowing the free export of U.S. crude oil worldwide.

GAO analyzed data from EIA and other federal databases to determine the effects of repealing the export ban. GAO also interviewed a nongeneralizeable sample of economists, market analysts, and stakeholders from the oil and gas, refining, and shipping industries. GAO's analysis focused on the repeal of the crude oil export ban and any effects of the repeal on U.S. crude oil and related industries through March 2020.