In 1980, Congress directed the Department of Energy to clean up part of the site. Since 2011, for example, Energy has demolished 51 of 55 structures, shipped 1.3 million cubic feet of radioactive waste off-site for disposal, and put other radioactive waste in interim storage on site.

However, there are no facilities authorized to accept this waste for disposal.

Congress should consider indicating how Energy is to proceed and possibly create a pathway for disposal of some of this radioactive waste. 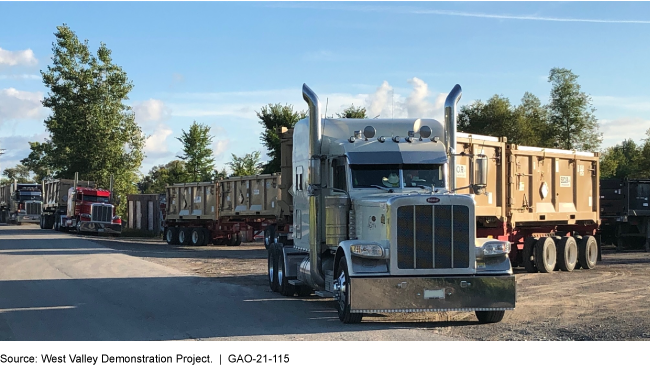 The Department of Energy (DOE) has made progress in cleaning up radioactive waste at the site of the West Valley Demonstration Project in New York State. In the 1960s and 1970s, a commercial facility at the site reprocessed spent (used) nuclear fuel into reusable nuclear material—creating various wastes that remained on-site after the facility closed in 1976. Since 2011, DOE has demolished 51 of 55 structures there and disposed of about 1.3 million cubic feet of low-level waste to off-site locations. It has also placed solidified high-level waste into interim on-site storage (see fig.). In addition, DOE has processed for interim on-site storage about 30,000 cubic feet of transuranic waste (which is contaminated with elements that have an atomic number greater than uranium). As of February 2020, DOE reported spending about $3.1 billion on contracted cleanup activities, but it cannot estimate the cleanup's final cost until it decides how it will address the remaining waste. 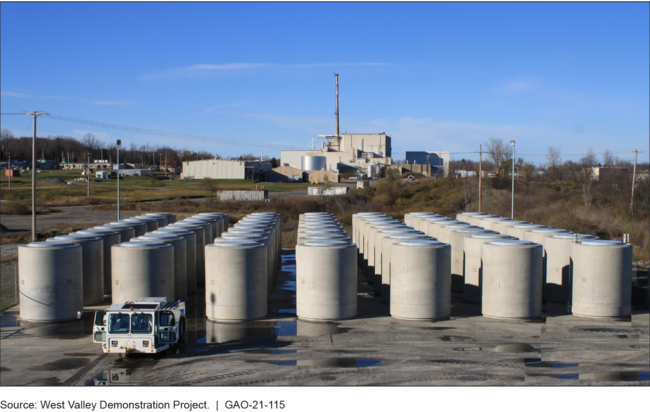 DOE has been unable to dispose of the high-level and transuranic wastes stored at West Valley because there are no facilities authorized to accept these wastes. DOE has identified two potential options for disposal of the transuranic waste: the federal Waste Isolation Pilot Plant in New Mexico and a commercial facility in Texas. However, the New Mexico facility is authorized to accept only waste from atomic energy defense activities, and DOE does not consider West Valley waste to be from atomic energy defense activities. Regarding the Texas facility, state regulations preclude disposal of the waste there. In 2017, DOE submitted to Congress a report on all disposal options, as required by the Energy Policy Act of 2005. Pursuant to this act, DOE must await action by Congress before making a final decision, and Congress has not yet acted.

The West Valley Demonstration Project Act, enacted in 1980, requires DOE to assist with cleanup activities at the site of the nation's only commercial facility for reprocessing spent nuclear fuel. The site contained 600,000 gallons of liquid high-level waste, radioactively contaminated structures and soils, and buried radioactive waste. In 2011, DOE began the first phase of its decommissioning plan, which included demolishing above-ground structures and removing contaminated soils.

The West Valley Reauthorization Act and the Senate Committee Report No. 116-48 included provisions for GAO to review progress on the cleanup at West Valley. GAO's report examines (1) the status of the cleanup and (2) DOE's options for disposing of the remaining radioactive waste.

GAO reviewed DOE's data on cleanup costs and waste volumes and its decommissioning plans, as well as laws, regulations, and policies governing radioactive waste disposal. GAO also interviewed officials from DOE and the state of New York, as well as other stakeholders.

Congress should consider taking action to provide a legal option for the disposal of West Valley's transuranic waste.