Behavioral health conditions such as depression and opioid use disorder affected an estimated 61 million U.S. adults in 2019. Research has shown that low-income individuals, such as those enrolled in Medicaid, are at greater risk of developing such conditions.

Eight states received funds to test whether changes to the delivery and payment of behavioral health care would help improve beneficiaries' access to and use of these services.

Better federal guidance could help states ensure that payments for these services meet Medicaid requirements—especially as the tests expand to other states. Our recommendations are to help improve that guidance. 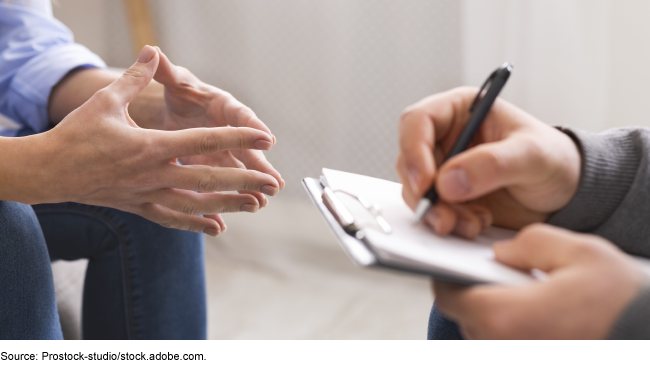 GAO's review of payment guidance for the demonstration from the Centers for Medicare & Medicaid Services (CMS), an agency within HHS that oversees Medicaid at the federal level, found that the guidance lacked clear and consistent information on better aligning CCBHC payment rates with costs and preventing duplicate payments. For example:

CMS guidance gives states the option to rebase their initial payment rates after the first demonstration year (i.e., use data on actual costs incurred and number of client visits during the first demonstration year to recalculate rates for subsequent years). CMS officials said rebasing would mean states would not have to rely on anticipated cost and client visit data after the first year, and would align rates more closely with costs. While officials said CMS expected all states to rebase their rates at some point, CMS's guidance does not reflect this expectation, or provide details on rebasing, such as suggested time frames.

CMS guidance conflicts as to whether CCBHCs that are also Federally Qualified Health Centers (FQHC)—safety net providers that generally provide some behavioral health services—should receive CCBHC and FQHC payments for the same client on the same day if provided services overlap.

Addressing these weaknesses is important to help ensure that Medicaid CCBHC payments meet requirements for Medicaid payments under federal law, including that they be consistent with efficiency, economy, and quality of care, and are sufficient to ensure access to care.

Behavioral health conditions affected an estimated 61.2 million adults in 2019. Congress has taken steps to expand access to behavioral health treatment, including authorizing the CCBHC demonstration, which is intended to improve the availability of community-based behavioral health services.

The CARES Act included a provision for GAO to report on states' experiences participating in the CCBHC demonstration. Among other objectives, this report describes what states reported about how the CCBHC demonstration affected state spending on behavioral health services; and examines CMS guidance for states on Medicaid CCBHC payments.

GAO reviewed documentation from and interviewed Medicaid and behavioral health officials from the eight CCBHC demonstration states, as well as federal officials tasked with demonstration oversight. GAO also reviewed documentation and interviewed officials from a nongeneralizable sample of three CCBHCs, which GAO selected for a number of reasons, including variation in geographic location.

HHS concurred with GAO's recommendations, and provided technical comments, which were incorporated as appropriate.