Foreign assistance to Northern Triangle countries (El Salvador, Guatemala, and Honduras) is meant to promote prosperity, good governance, and security in the region. In March 2019, the Trump administration withheld that assistance until those countries took steps to reduce the number of migrants coming to the U.S. border—suspending new funds and reallocating prior year funds.

This adversely affected 65 of the State Department's 168 projects, and 92 of the U.S. Agency for International Development's 114 projects. Funding resumed in June 2020, but both agencies reported delays and fewer services to beneficiaries during the 14-month suspension.

Map of Central America with the Northern Triangle Countries 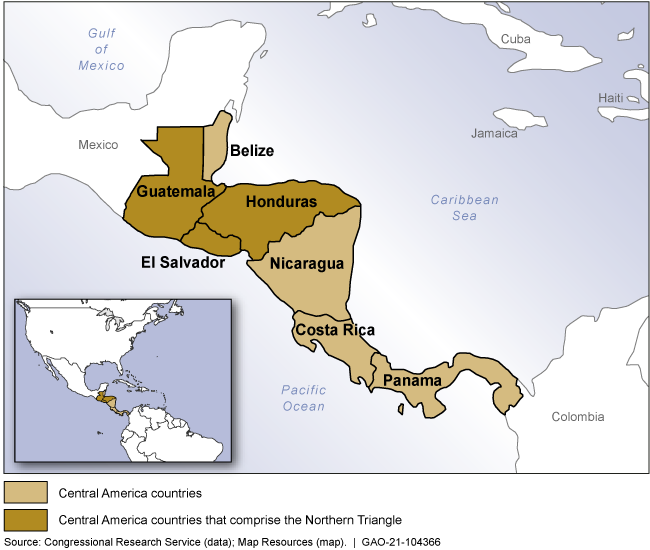 Starting in March 2019, the Trump administration suspended most new foreign assistance funding from the U.S. Agency for International Development (USAID) and the Department of State to El Salvador, Guatemala, and Honduras—the “Northern Triangle” of Central America—for up to 14 months and reprogrammed approximately $396 million (85 percent) of fiscal year 2018 funding to other countries. In June 2020, the administration ended the suspension of assistance funding. After the end of the suspension, USAID adjusted its assistance portfolio to implement projects that focused on deterring migration and designed new indicators to assess the relationship between its assistance projects and migration from the region. Officials from State and USAID said their overall assistance approach of promoting prosperity, good governance, and security remained the same after the suspension.

Although some previously funded projects continued operating as planned, the 2019 suspension and reprogramming of assistance funding adversely affected 92 of USAID's 114 projects and 65 of State's 168 projects. Both USAID and State reported that commonly experienced adverse effects on project implementation were delays from planned timeframes and decreased frequency, quality, or types of services provided to beneficiaries (see figure). 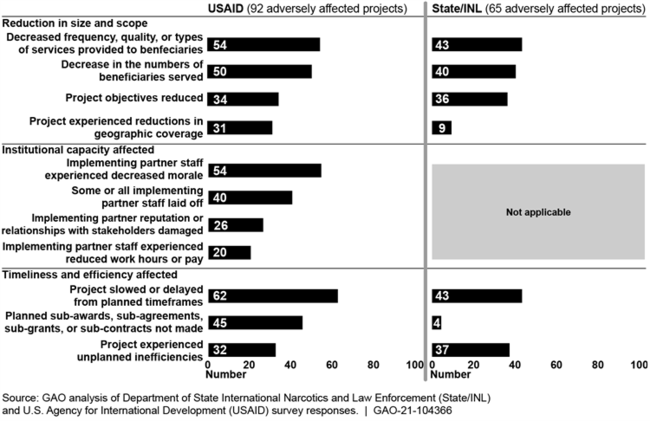 The U.S. has funded assistance to the Northern Triangle of Central America for many years. This assistance aims to promote prosperity, good governance, and security in the region; to address the causes of migration; and to combat transnational crime. In March 2019, the administration suspended foreign assistance funding from the Northern Triangle countries until the governments in the region agreed to take actions to reduce the number of migrants coming to the U.S. border.

GAO analyzed agency funding data and performance and monitoring reports, surveyed agency project managers, and interviewed agency officials as well as selected implementing partners in the U.S. and in the Northern Triangle countries.