The DATA Act seeks to improve the quality and comparability of federal spending data available to Congress and the public, and requires it to be posted on USAspending.gov.

We found that data quality on USAspending.gov has improved since our 2017 review. However, varying interpretations of data standards lead to persistent data quality issues. Additionally, known data limitations are not fully disclosed.

To help ensure that users have the best quality data possible and can understand what they're working with, we restated our prior recommendations on these issues and made 2 new ones to Treasury on disclosing data limitations. 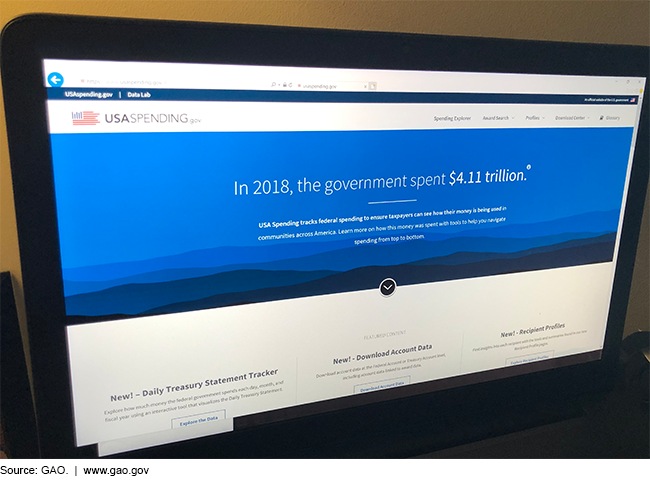 The Digital Accountability and Transparency Act of 2014 (DATA Act) requires federal agencies to report spending data to USAspending.gov, a public-facing website. A total of 96 federal agencies submitted required spending data for quarter four of fiscal year 2018 (Q4 FY2018). GAO examined the quality of these data and compared the results with the results of its prior review of quarter two of fiscal year 2017 (Q2 FY2017) data, as appropriate. GAO identified improvements in overall data quality, but challenges remain for completeness, accuracy, use of data standards, disclosure of data limitations, and overall data governance.

Use of data standards. GAO continued to identify challenges related to the implementation and use of two data elements— Award Description and Primary Place of Performance Address— that are particularly important to achieving the DATA Act's transparency goals. GAO found that agencies continue to differ in how they interpret and apply The Office of Management and Budget's (OMB) standard definitions for these data elements. As a result, data on USAspending.gov are not always comparable, and in some cases it is difficult for users to understand the purpose of an award or to identify the location where the performance of the award occurred.

USAspending.gov presentation. GAO identified known data limitations that were not fully disclosed on USAspending.gov. For example, the 90-day delay for inclusion of Department of Defense procurement data is not clearly communicated. In addition, although the website provides a total figure for unreported spending it is unclear whether it includes the 11 agencies that did not submit data. Not knowing this information could lead users of USAspending.gov to inadvertently draw inaccurate conclusions from the data.

The DATA Act requires federal agencies to disclose roughly $4 trillion in annual federal spending and link this spending information to federal program activities so that policymakers and the public can more effectively track federal spending through its life cycle. The act also requires OMB and Treasury to establish data standards to enable consistent reporting of agency spending. The DATA Act includes a provision for GAO to report on the quality of the data collected and made available through USAspending.gov.

Specifically, this report addresses: (1) the timeliness, completeness, and accuracy of the data, and the implementation and use of data standards; and (2) progress made in developing a data governance structure consistent with key practices, and how it affects data quality. GAO examined a projectable government-wide sample of Q4 FY2018 spending data from a Treasury database that populates data on USAspending.gov by comparing them to agency source records and other sources. GAO also compared the results of Q4 2018 with results from its previous review of Q2 FY2017 data.

Federal agencies spend over $4 trillion a year. But how that money is spent isn’t always easy to...
Blog Post