Many federal agencies have specialized law enforcement teams trained and equipped for critical incidents such as hostage rescue. This report describes these federal tactical teams, including their deployments and equipment.

We identified 25 teams within the Departments of Homeland Security, Justice, and elsewhere.

Deployments per team from FY 2015-19 ranged from 0 to over 5,000. Sixteen teams reported deployments related to nationwide civil unrest and protests in May and June 2020.

Teams reported having various items, such as firearms, armored personnel carriers, aircraft, and specialized munitions, such as rubber bullets and tear gas. 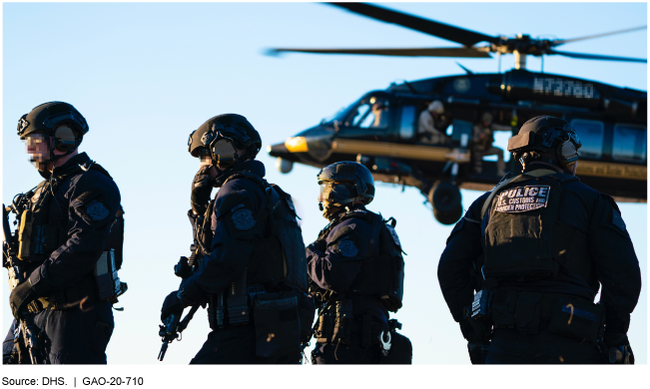 Within the executive branch, GAO identified 25 federal tactical teams, and the characteristics of these teams varied. The 25 tactical teams were across 18 agencies, such as agencies within the Departments of Homeland Security, Justice, Energy, and the Interior. The number of reported team members per team ranged from two to 1,099. More than half (16 of 25) of the teams reported that they are composed of team members working for the team on a collateral basis. Most teams (17 of 25) had multiple units across various locations.

Four teams reported that they had deployed in response to the Coronavirus 2019 (COVID-19) pandemic, and 16 teams reported deployments related to nationwide civil unrest and protests in May and June 2020.

Tactical teams reported having various types of firearms, tactical equipment, and tactical vehicles in their inventories. Team members generally have a standard set of firearms (e.g., a pistol, a backup pistol, and a rifle), but some may also have specialized firearms (e.g., a shotgun designed to breach doors). Tactical teams also have a variety of tactical equipment, such as night vision devices to maintain surveillance of suspects or tactical robots that can go into locations to obtain audio and video information when team members cannot safely enter those locations. Tactical teams may also have tactical vehicles, such as manned aircraft (e.g., helicopters) and armored vehicles to patrol locations. The figure below identifies the number of tactical teams that reported having such items in their inventories.

Number of Federal Tactical Teams That Reported Having Firearms, Tactical Equipment, and Tactical Vehicles in Their Inventories, as of January 2020 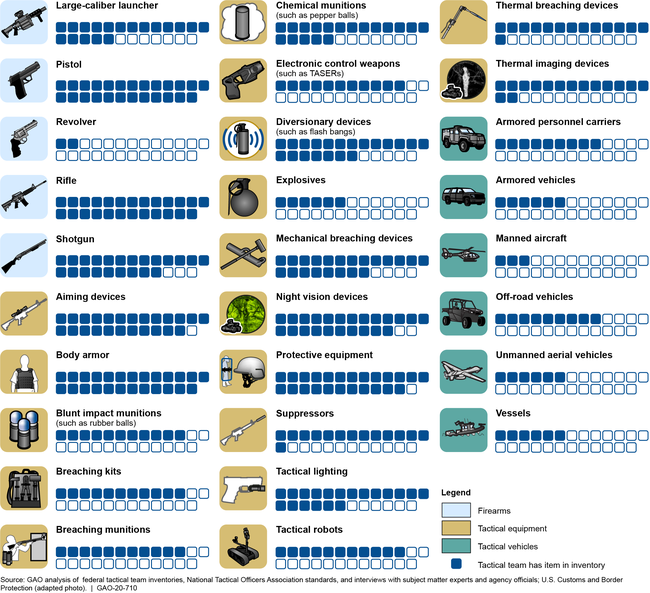 Appendix I of the report provides details on each of the 25 tactical teams, such as each team's mission; staffing; types and frequency of training; and number and types of deployments from fiscal years 2015 through 2019. This is a public version of a sensitive report issued in August 2020. Information deemed to be sensitive by the agencies in this review, such as the quantities of firearms, tactical equipment, and tactical vehicles in team inventories, has been omitted from this report.

Many federal agencies employ law enforcement officers to carry out the agency's law enforcement mission and maintain the security of federal property, employees, and the public. Some of these agencies have specialized law enforcement teams—referred to as federal tactical teams in this report—whose members are selected, trained, equipped, and assigned to prevent and resolve critical incidents involving a public safety threat that their agency's traditional law enforcement may not otherwise have the capability to resolve.

This report provides information on the (1) federal tactical teams and their characteristics; (2) training team members receive; (3) deployments of such teams from fiscal years 2015 through 2019; and (4) firearms, tactical equipment, and tactical vehicles in team inventories, as of January 2020.