Counterfeiters sometimes post photos of authentic goods on e-commerce sites, but then fill orders with fakes. These counterfeit goods infringe on intellectual property rights, and can harm the U.S. economy and threaten consumer safety.

U.S. Customs and Border Protection and European customs officials are trying to combat the increasing numbers of small packages containing counterfeit goods that are being sent directly to consumers. But CBP officials said the seizure and forfeiture processes that U.S. law requires are time and resource intensive.

We recommended that CBP develop a more streamlined approach to enforcement in this area. 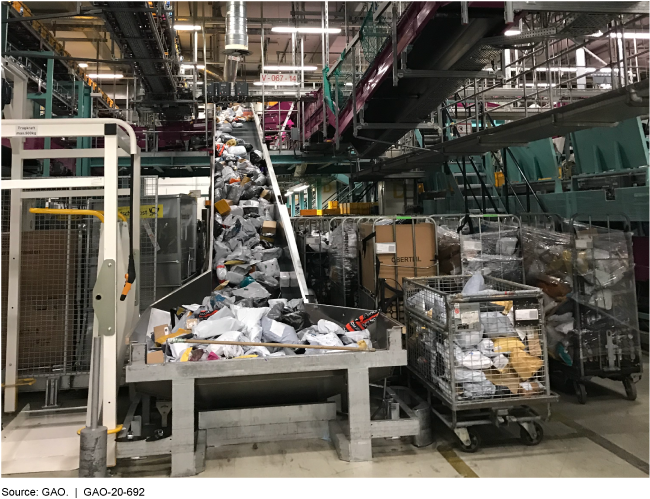 The European Union (EU) and U.S. approaches to enforcing intellectual property rights (IPR) differ with respect to counterfeit goods in small packages, which are often sent through express carrier services or international mail. The EU uses a streamlined, application-based procedure to destroy suspected counterfeits in small packages. Through this procedure, rights holders request that member state customs authorities take action against such packages. The procedure allows customs authorities to bill rights holders for certain associated costs, and gives customs authorities discretion in sharing data with rights holders. In the U.S., U.S. Customs and Border Protection (CBP)—a component of the Department of Homeland Security (DHS)—is required to seize any goods it determines to be counterfeit, and typically destroys such goods, regardless of shipment size. CBP does not bill rights holders for the cost of enforcement, and is required to provide specific information to rights holders after seizure of goods.

EU and U.S. customs officials reported common challenges in combating the flow of counterfeit goods in small packages. For example, EU and U.S. officials said the large volume of small packages makes it difficult for customs agencies to prioritize resources among competing needs such as drug enforcement and security. EU and U.S. officials also reported that a lack of adequate data on these packages is a challenge in taking enforcement action against them.

Bags of Small Packages at Mail Facilities in Germany and France

While CBP has taken steps to address these challenges, its primary enforcement processes are not tailored to combat counterfeit goods in small packages. According to CBP officials, from 2014 to 2018, CBP piloted a program to help address the volume of such packages by facilitating the abandonment of goods that it suspected—but had not determined—to be counterfeit. In 2019, CBP initiated a program to obtain additional data, and as of July 2020 had begun using these data to assess the risk that such packages contained counterfeit goods. However, CBP officials said that the seizure and forfeiture processes they are required to use for goods determined to be counterfeit are time and resource intensive. In April 2019, the White House required DHS to identify changes, including enhanced enforcement actions, to mitigate the trafficking of counterfeit goods. In January 2020, DHS proposed several actions that CBP could take, but CBP has not decided which to pursue to streamline its enforcement. Without taking steps to develop a streamlined enforcement approach, CBP will continue to face difficulty in addressing the influx of counterfeit goods in small packages.

GAO was asked to review IPR enforcement practices in other advanced economies, and the extent to which CBP could apply those practices. This report examines: (1) how elements of the EU and U.S. approaches to combating counterfeit goods in small packages compare, (2) any enforcement challenges posed by these goods, and (3) the extent to which CBP has taken steps to address these challenges. GAO reviewed agency documents; interviewed CBP and customs officials in the EU; and met with private sector stakeholders, such as express carriers.

GAO recommends that CBP take steps to develop a streamlined enforcement approach against counterfeit goods in small packages. CBP concurred with the recommendation.