The Department of Justice is responsible for collecting from defendants who have been ordered by a federal court to pay restitution.

We evaluated DOJ's collection process in 2018 and made 2 recommendations. This report shows how they were addressed. 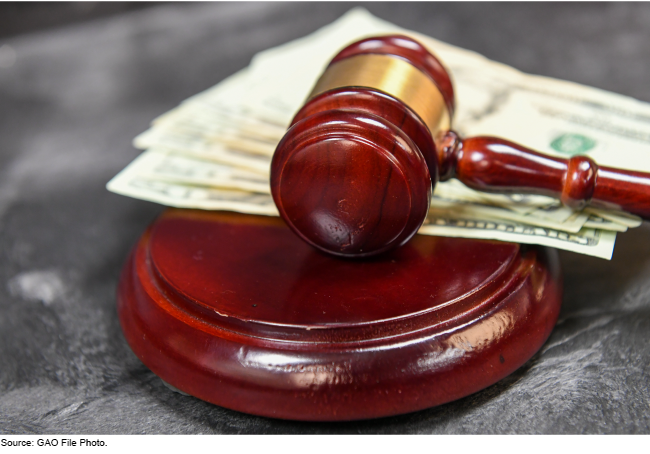 The Department of Justice (DOJ) is responsible for collecting restitution payments from defendants who have been ordered by a federal court to pay restitution as part of their sentences, and has delegated these activities to Financial Litigation Units within each of its 94 U.S. Attorney’s Offices (USAO). In February 2018, GAO reported that while DOJ was developing tools to monitor the collection of federal criminal restitution, it had not established performance measures or goals to allow DOJ to gauge the success of USAOs in collecting restitution. GAO also reported that DOJ did not have insight into reasons why funds from forfeited assets were not actually being used to compensate eligible victims.

Based on our findings, we recommended that the Attorney General:

(1) Develop and implement performance measures and goals for each USAO related to the collection of restitution, and measure progress towards meeting those goals; and

This report addresses the Attorney General’s implementation of the recommendations.

DOJ Has Made Progress in Developing Performance Measures and Goals, but Has Experienced Some Challenges

As mentioned, the DOJ expects to finalize and implement performance measures and goals to evaluate each USAO related to the collection of restitution during the first quarter of fiscal year 2021. However, DOJ has experienced challenges, which have delayed implementation.

DOJ officials we interviewed stated that the Executive Office for United States Attorneys (EOUSA) developed a core set of metrics to assess each of the 94 USAO’s debt collection efforts, and that since 2018 EOUSA has been working with the Justice Management Division’s Debt Collection Management staff to develop a business intelligence analytical tool to assist in analyzing these metrics. However, according to DOJ, given the uniqueness of each USAO, it has experienced challenges—resulting in delays--in developing measures and goals that provide USAOs with sufficient flexibility to account for each office’s workload, priorities, and available resources. Initially, DOJ’s proposed completion time frame was October 2020; however, as of August 2020, it is scheduled to take place during the first quarter of fiscal year 2021.

DOJ Has Taken Steps to Better Track and Use Forfeited Assets

A provision in the Justice for All Reauthorization Act of 2016 required two GAO reports on federal criminal restitution. We issued our first report in February 2018 and made two recommendations to the Attorney General to improve oversight of the collection of federal criminal restitution. GAO’s objective was to address the Attorney General’s implementation of the recommendations. GAO reviewed relevant DOJ policies and guidance and interviewed department officials to identify DOJ’s process and progress in developing performance measures and goals for each USAO related to the collection of federal criminal restitution—including the department’s reported challenges experienced. GAO also obtained and analyzed documentation to identify the extent to which DOJ gathered information on the reasons why forfeited assets were not used to compensate eligible victims and whether DOJ used this information to consider whether action was necessary to increase the use of forfeited assets.