Pyrrhotite is a mineral that expands when exposed to water and oxygen. If pyrrhotite is present in concrete—as it is in the foundations of at least 1,600 Connecticut and Massachusetts homes—the concrete can crack and crumble.

It can cost $150,000 to raise a house and remove and replace the foundation. Insurance companies have mostly denied related claims, and a Connecticut program that covers some costs is running out of money.

Federal programs have helped some homeowners. But additional programs that could apply only cover a small portion of costs and have eligibility restrictions—e.g., homeowners may not meet income or age requirements.

A house is raised so that its foundation, which contains pyrrhotite, can be removed and replaced. 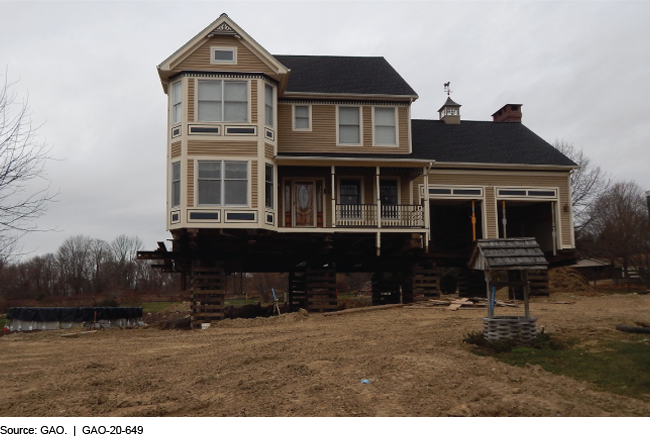 Affected homeowners may face total remediation costs of $150,000 or more and drops in property values of 25 percent or more. Connecticut established funding to provide homeowners with up to $175,000 towards the cost of foundation replacement, but affected homeowners are typically responsible for about one-third of total repair costs (which can include costs for replacing driveways and porches damaged during foundation replacement). Current funding is expected to assist 1,034 homeowners.

GAO found that highly affected towns lost more than $1.6 million in tax revenue in 2018 due to lost assessment value of the houses affected by pyrrhotite, but town officials told us the losses have not yet significantly affected their budgets. However, officials were concerned that pyrrhotite could have long-term effects on their towns if the number of affected homes increased or homes were not remediated. GAO also found that homes located in highly affected towns and built when pyrrhotite-containing concrete was used sold for significantly less, on average, than similar homes in less-affected towns. Stakeholders told GAO that defaults and foreclosures related to pyrrhotite have been limited to date.

Some federal funds have already been used for pyrrhotite testing and GAO identified eight additional federal programs that could be used to help mitigate financial impacts on homeowners. However, most of these programs have eligibility or funding restrictions that limit their potential for this purpose. Stakeholders with whom GAO spoke suggested other federal responses—in particular, declaring pyrrhotite damage a major disaster or establishing a federally backed insurance product. However, the Federal Emergency Management Agency determined that pyrrhotite damage did not qualify as a natural catastrophe, and a federally backed insurance program may not be feasible since it would serve a small population with high expected costs.

GAO analyzed data from state, local, and private entities about the extent of pyrrhotite in foundations and associated costs, and federal actions taken in response to pyrrhotite. GAO also interviewed federal, state, and local officials; homeowners; and other stakeholders such as banks and real estate agents.