Religious-based hate crimes are on the rise on America’s college campuses, according to data from the Departments of Education and Justice.

DOJ offers publications, webpages, and educational activities to help colleges and campus law enforcement monitor and address these crimes. However, much of DOJ’s information is outdated and difficult to find in one place. In addition, many colleges are unaware of what resources are available.

We recommended that DOJ update, centralize, and share its information to make it easier to use.

Religious-based Hate Crimes on College Campuses, as Reported to Education and DOJ, 2009-2017 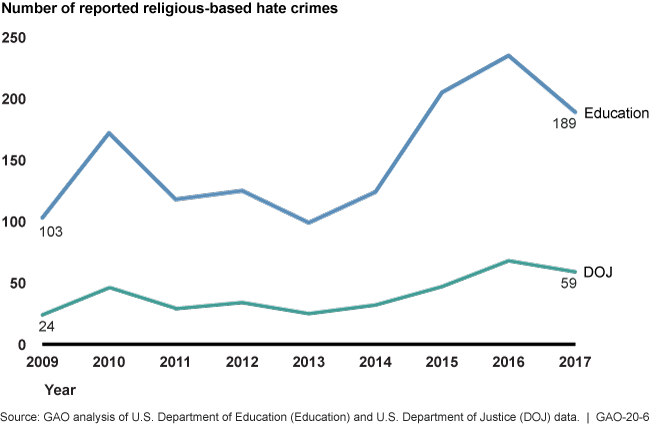 Line graph showing 189 reports to Education and 59 to DOJ

Data from the Departments of Education (Education) and Justice (DOJ) show an increasing number of reported religious-based hate crimes on college campuses during the past decade. While these agencies collect slightly different data, crimes reported to Education have increased from 103 in 2009 to 189 in 2017, and crimes reported to DOJ increased from 24 to 59. These trends were largely driven by increased reports of anti-Jewish and anti-Muslim crimes, according to DOJ data. However, DOJ officials and some stakeholders GAO interviewed said DOJ data likely undercount these crimes due to underreporting. Although no federal agencies collect data on the frequency of religious bias incidents—non-criminal acts motivated by bias against a religious group—representatives of eight of the sixteen stakeholder groups GAO interviewed said the prevalence of these incidents on college campuses is also increasing.

To prevent and respond to religious-based hate crimes and bias incidents on campuses, stakeholders GAO interviewed said some colleges have encouraged reporting, implemented new policies, and educated students and staff about their effects. Such efforts must be informed by First Amendment considerations at public colleges. Some colleges have also worked to promote religious tolerance, communicate publicly about crimes, and build relationships with religious groups.

Education and DOJ provide information and other resources to help colleges, campus law enforcement, and other stakeholders monitor and address religious-based hate crimes and bias incidents, but key DOJ information does not reflect new trends—such as changes in technology—and is difficult to find. For example, DOJ's publication most relevant to religious-based hate crimes and bias incidents on campuses and college practices to combat them was published in 2001 and does not reflect new trends or evolving college practices to address them. Further, colleges wishing to learn about DOJ resources must review almost 80 linked webpages or be routed to the homepages of five DOJ offices. DOJ officials said they share information about agency resources with colleges via newsletters, presentations, or the agency's website, but 10 out of 16 stakeholder groups GAO interviewed said they or their college members were unaware of DOJ's resources. Until DOJ makes up-to-date information easy to find and shares this information with colleges, campus law enforcement, and other stakeholders, these groups may miss opportunities to effectively use the resources to address these crimes and bias incidents.

On average, 205,000 U.S. residents report being victims of hate crimes every year, according to DOJ officials. Hate crimes, including those motivated by bias against an actual or perceived religion, can have a broader effect than other kinds of violent crimes because they target both the victim and the group the victim represents. GAO was asked to review religious-based hate crimes on college campuses.

GAO analyzed DOJ and Education hate crime data from 2009 through 2017, the years for which all relevant data are available. GAO reviewed studies to identify college practices to address this issue as well as Education and DOJ policies, programs, and resources that could help colleges, campus law enforcement, and other stakeholders monitor and address these crimes and bias incidents, and how the information is shared. GAO also interviewed representatives of 16 stakeholder groups, including college associations, campus and public safety organizations, and religious groups.

On October 31, 2019, a sentence on pg. 14 of this report was revised to state the correct number of religious-based hate crimes reported to the Department of Education (103 in 2009 and 189 in 2017) and Department of Justice (24 in 2009 and 59 in 2017). In the original version, these numbers were transposed between the two agencies.
Skip to Recommendations