Armed groups in the Democratic Republic of the Congo continue to commit severe human rights abuses and to profit from the mining and trading of "conflict minerals," according to the State Department. These minerals include tin, gold, and others that are used to finance conflict in the area.

State and the U.S. Agency for International Development created a conflict minerals strategy in 2011 to try to stop the exploitation. However, the agencies have not established ways to measure progress toward objectives such as promoting responsible trade through public outreach. We recommended the agencies develop such measures. 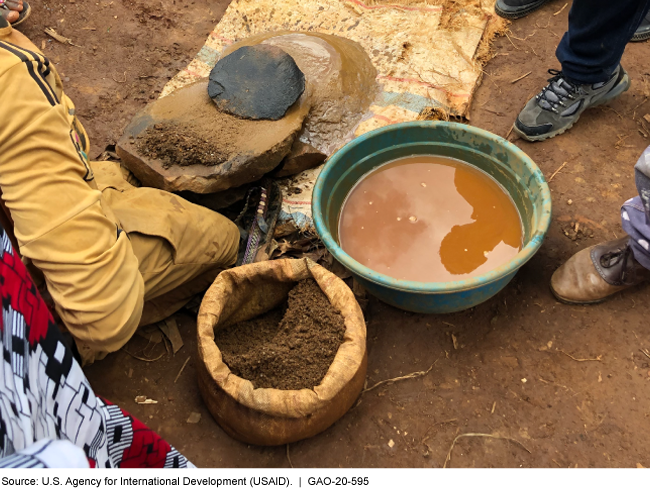 The Securities and Exchange Commission (SEC) disclosure rule broadly requires that certain companies submit a filing that describes their efforts to conduct a reasonable country-of-origin inquiry (RCOI), and depending on the preliminary determination, perform due diligence to determine the source and chain of custody of their conflict minerals—gold and specific ores for tantalum, tin, and tungsten. After conducting RCOI, an estimated 50 percent of companies filing in 2019 reported preliminary determinations as to whether the conflict minerals came from the Democratic Republic of the Congo (DRC) or adjoining countries (covered countries) or from scrap or recycled sources. The percentage of companies able to make such preliminary determinations increased significantly between 2014 and 2015, and has since leveled off, as shown below.

However, fewer companies reported such determinations after conducting due diligence. In 2019, an estimated 85 percent of companies made preliminary determinations that required them to then perform due diligence. Of those companies, an estimated 17 percent determined that the minerals came from covered countries—a significantly lower percentage of companies making that determination than the 37 percent reported in 2017 or the 35 percent in 2018. Since 2014, companies have noted various challenges they face in making such determinations; however, SEC staff told GAO that they did not know what factors contributed to the decrease in 2019. We will examine this issue during our future review.

While the Department of State (State) and U.S. Agency for International Development (USAID) have implemented the U.S. conflict minerals strategy since 2011, they have not established performance indicators for all of the strategic objectives. For example, they have no such indicators for the objectives of strengthening regional and international efforts and promoting due diligence and responsible trade through public outreach. Without performance indicators, the agencies cannot comprehensively assess their progress toward achieving these objectives or the overall goal of addressing armed groups' exploitation of conflict minerals.

Armed groups in eastern DRC continue to commit severe human rights abuses and to profit from the exploitation of “conflict minerals,” according to State. Provisions in the 2010 Dodd-Frank Wall Street Reform and Consumer Protection Act required, among other things, that State, USAID, and the SEC take certain actions to promote peace and security. In 2011, State created the U.S. conflict minerals strategy in consultation with USAID to address armed groups' exploitation of conflict minerals. In 2012, the SEC also promulgated regulations containing disclosure and reporting requirements for companies that use conflict minerals from covered countries. The act also included a provision for GAO to annually assess, among other things, the SEC regulations' effectiveness in promoting peace and security.

In this report, GAO examines, among other things, how companies responded to the SEC conflict minerals disclosure rule when filing in 2019 and the extent to which State and USAID assessed progress toward the U.S. conflict minerals strategy's objectives and goal. GAO analyzed a generalizable sample of SEC filings, reviewed documents, and interviewed U.S. officials

State, in consultation with USAID, should develop performance indicators for assessing progress toward the strategic objectives and goal of the U.S. conflict minerals strategy. State and USAID concurred with GAO's recommendation.