The Lake Ontario-St. Lawrence River waterway supports multiple users in the U.S. and Canada that live, visit, or conduct business in the region. Representatives of both countries serve on a commission that implements Plan 2014, which governs water releases from the lake into the river.

We found that the commission doesn't effectively evaluate its efforts to communicate with stakeholders about these water releases. It also hasn't developed a comprehensive plan to assess and improve Plan 2014.

We recommended that U.S. commissioners work with their Canadian counterparts to develop more robust plans for communicating and for assessing Plan 2014.

Examples of Users of the Lake Ontario-St. Lawrence River Waterway 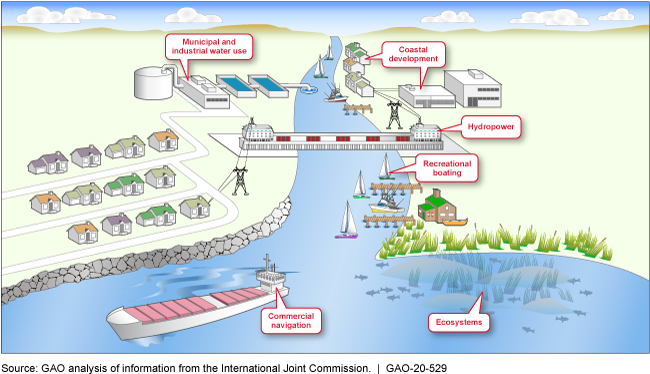 The International Joint Commission's (IJC) process for developing and selecting the Lake Ontario-St. Lawrence River Plan 2014 (Plan 2014) was generally consistent with relevant essential elements of risk-informed decision-making. During the 18-year process, IJC took steps to define objectives and performance measures to be used in its decision-making, identify various options, assess uncertainties like climate change, and engage with stakeholders, among other steps. These steps are all essential elements of risk-informed decision making.

Plan 2014 Affects Various Users of Lake Ontario and the St. Lawrence River, Including (from Left to Right) Commercial Navigation, Coastal Development, and Recreational Boating, Including Marinas

Of the 14 stakeholders interviewed, nine expressed concerns about the rules and criteria in Plan 2014 and 10 expressed concerns about its implementation. For example, seven stakeholders told us that they do not believe that the Plan allows IJC to act proactively in anticipation of future water conditions. IJC has taken initial steps to develop an adaptive management process that may help address stakeholder concerns and approved a long-term adaptive management strategy in March 2020. However, the document does not fully incorporate the key elements and essential characteristics of an adaptive management process that could help IJC transparently and effectively assess Plan 2014 and adjust future actions to achieve the plan's objectives. For example, the Plan does not fully incorporate a communication strategy for engaging stakeholders throughout the process or information on how IJC will determine if adjustments to the Plan's rules and criteria are warranted.

Water releases from Lake Ontario into the St. Lawrence River are determined by a set of regulatory rules and criteria called Plan 2014—issued pursuant to IJC's Supplementary Order of Approval and the Boundary Waters Treaty of 1909. The IJC—a binational commission—developed and issued the Plan and Order with the concurrence of the United States and Canada. The rules affect a variety of users of the waterway, including ecosystems, hydropower, and municipal and industrial water use.

GAO is making three recommendations, including that the U.S. Section of the IJC work with its Canadian counterpart to ensure that the communication plan aligns with best practices and the adaptive management strategy fully incorporates key elements. IJC agreed with our recommendations.