Overgrown vegetation can fuel wildfires, which have been increasing in size and severity. Federal land management agencies reduce vegetation on high-risk public lands primarily by cutting it or intentionally burning it, often in combination.

In fiscal years 2009-2018, these agencies received more than $5 billion (over $500 million per year on average) to reduce this vegetation.

Officials cited several factors affecting their efforts. For example, there are significantly more high-risk acres—about 100 million—than the agencies can treat each year, which was about 3 million in fiscal year 2018. 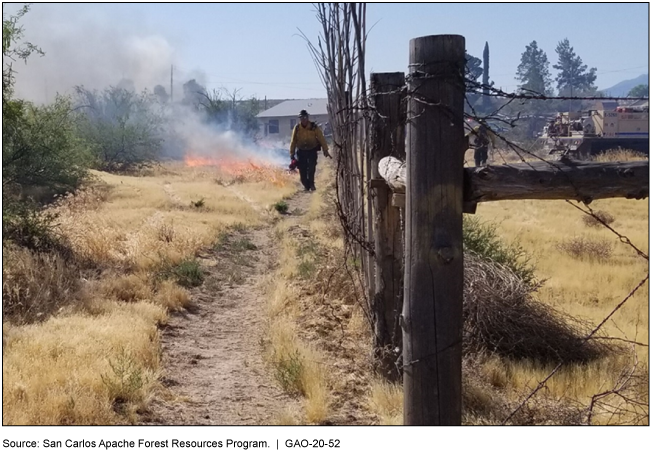 A person walking near a fire near a dry field

Five federal land management agencies—the Department of Agriculture's Forest Service and the Department of the Interior's Bureau of Indian Affairs, Bureau of Land Management, Fish and Wildlife Service, and National Park Service—use several methods to reduce fuels (vegetation) to help lower the intensity of wildland fires on lands they manage or administer. These methods primarily include mechanical treatments, which use equipment to cut and remove vegetation, and prescribed burns, which are deliberate, planned fires set by land managers. The agencies have long-standing research programs designed to further develop their understanding of how to implement effective fuel reduction projects, including conducting assessments to evaluate project effectiveness. Officials said the research helps the agencies to improve how they design and implement fuel reduction projects to address site-specific conditions.

Officials from the five agencies cited several factors affecting implementation of fuel reduction projects. A key factor officials cited is that the number of acres needing treatment is significantly larger than the agencies can treat annually. The agencies have estimated that over 100 million acres they manage or administer are at high risk from wildfire, but, for example, in fiscal year 2018 they treated approximately 3 million acres. The agencies are developing risk assessments to help identify areas to prioritize for fuel reductions.

Forest Service and Department of the Interior Fuel Reduction Appropriations, Fiscal Years 2009 through 2018

Note: Dollar values are not adjusted for inflation. Fiscal year 2009 funding was partially based on a single year supplemental appropriation under the American Recovery and Reinvestment Act of 2009.

Wildfires have been increasing in size and severity, exacerbated by abnormally dense vegetation, drought, and other climate stressors. Development in and around wildlands also continues to increase, placing more people at risk from wildfires. To reduce vegetation that can fuel such fires, federal land management agencies implement fuel reduction projects on public lands.

GAO was asked to examine the federal government's preparedness, response, and recovery efforts following the wildfires and other natural disasters of 2017. This report describes (1) methods federal agencies use to reduce fuels to help protect communities and ecosystems, (2) information the agencies considered in allocating fuel reduction funds in fiscal year 2018, and (3) factors affecting agency efforts to implement fuel reduction projects.

GAO examined laws, regulations, and agency policies and budget documents; interviewed federal agency officials at headquarters, as well as in eight regional offices and 10 field units selected based on their locations' high wildland fire hazard potential; and interviewed officials from nonfederal entities, including representatives from the state forestry agencies for the seven states where selected field units were located (three field units were in California and two were in New Mexico).