We looked at the duties that U.S. Customs and Border Protection billed importers for in fiscal years 2001-2018. Over $20 billion of those duties were collected, but $4.5 billion remained uncollected as of May 2019.

CBP and the Department of Commerce are taking steps to improve duty collection. For example, CBP is developing tools to identify importers at risk for nonpayment and adjust insurance requirements (bonds) for these importers.

CBP collects an initial estimate of the duty when the import enters the U.S. 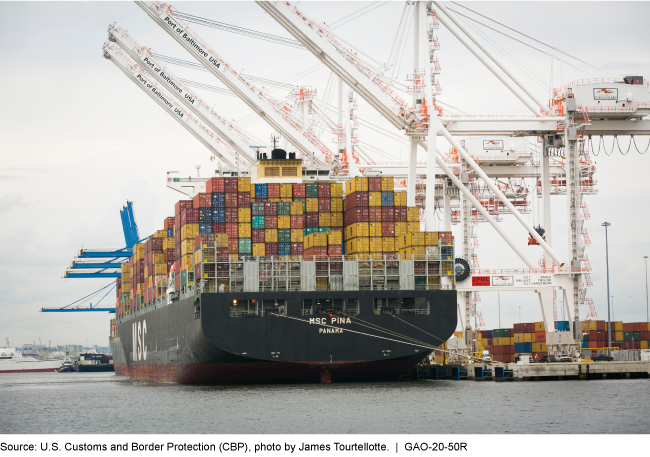 The United States assesses antidumping (AD) duties on products imported at unfairly low prices and countervailing (CV) duties on products subsidized by foreign governments to address injury to domestic industries. We identified some steps that the Department of Commerce (Commerce) and U.S. Customs and Border Protection (CBP) had taken to address weaknesses identified in GAO and Inspectors General (IG) reports to address weaknesses in AD/CV duty rate-setting and mitigating uncollected duties. However, CBP needs to continue working to strengthen its liquidation process and operationalize a risk model to identify high-risk importers and adjust bond amounts.

In 2017, the Commerce IG found that Commerce had not consistently followed its quality assurance framework for calculating AD/CV duty rates and had missed internal deadlines for determinations for regulatory cases. In response, Commerce made changes to its quality assurance processes to improve the accuracy of its AD/CV duty rate-setting. However, Commerce noted that its error rate for all cases during fiscal years 2016-2018 increased from 4 percent to about 6 percent, attributing this increase to historically high workloads, high turnover of experienced staff, and little increase in overall staff levels.

In 2016, GAO found that CBP could more comprehensively analyze its data to identify importers at greater risk for AD/CV duty nonpayment and implement a risk-based approach to take appropriate action to mitigate the risk to revenue. In response to these findings, CBP is in the process of developing and implementing a risk-based framework to mitigate risk by using statistical models to identify risk factors associated with importers at greater risk for AD/CV duty nonpayment. As part of the framework, CBP has also analyzed and tested bonding options that incorporate the risk factors identified in the models and is planning to require importers identified as being at greater risk for AD/CV duty nonpayment to purchase additional security.

Also in 2016, GAO found that CBP could better monitor and minimize liquidation processing errors, and determine the revenue effect associated with these errors.

The U.S. system for determining AD/CV duties involves the setting of an initial estimated duty rate upon the entry of goods into the United States, followed by the retrospective assessment of a final duty rate based on a calculation of the actual amount of dumping or subsidization that occurred. In 2016, GAO reported that CBP continued to face challenges collecting payment on supplemental AD/CV duty bills, attributable in part to the U.S. government’s retrospective assessment of final duties owed and the complex and lengthy process for determining final AD/CV duty rates. As of August 2019, the U.S. government had collected an additional $1.6 billion in revenue during fiscal years 2001 through 2018 as a result of upward adjustments of the final AD/CV duty rates, but also had $4.5 billion in open and uncollected AD/CV duty bills for that period.