FEMA grants have been used to acquire and demolish flood-prone properties to help reduce flood damage. Reduced damage should lead to fewer or less costly claims for the National Flood Insurance Program, which FEMA also administers. But the number of such properties keeps growing, and the program still doesn’t collect enough in premiums to cover claims over the long term.

The flood insurance program is $20.5 billion in debt to Treasury, and continues to put taxpayers at financial risk. We reiterate our previous suggestion that Congress comprehensively reform the program to ensure its solvency and improve national flood resilience. 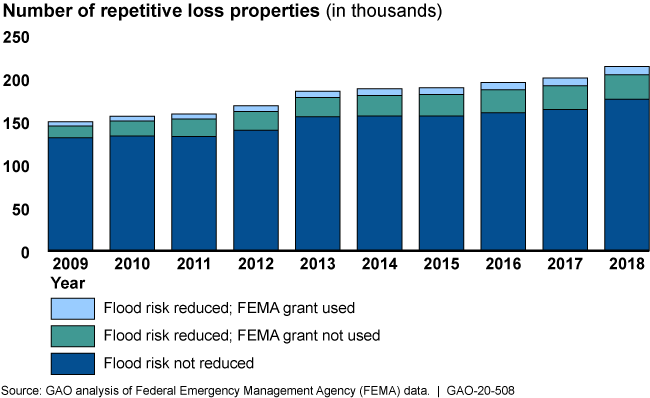 The Federal Emergency Management Agency (FEMA) administers three grant programs that can fund efforts to mitigate the flood risk of properties insured by the National Flood Insurance Program (NFIP). Together, these three programs funded $2.3 billion in mitigation projects from fiscal years 2014 through 2018. The largest program's funding is tied to federal recovery dollars following presidential disaster declarations, while the other two programs are funded each year through congressional appropriations. States and localities generally must contribute 25 percent of the cost of a mitigation project, but some other federal program funds can be used for that purpose. One example of such a project is property acquisition—purchasing a high-risk property from a willing property owner, demolishing the structure, and converting the property to green space.

From 1989 to 2018, FEMA has helped states and localities mitigate more than 50,000 properties; however, the number of nonmitigated repetitive loss properties (generally meaning those that flooded at least twice in 10 years) has grown. Mitigation efforts varied by state. Property acquisition accounted for about 80 percent of mitigated properties nationwide, but, in some states, elevation (raising a structure) was more commonly used. In addition, some states (e.g., Missouri and North Carolina) mitigated a high number of properties relative to their numbers of repetitive loss properties, while others (Florida, New York, Louisiana, and Texas) mitigated a low number.

While these efforts can reduce flood risk and claim payments, the federal government's fiscal exposure from NFIP remains high because premium rates do not fully reflect the flood risk of its insured properties. NFIP has experienced several catastrophic flood events in recent years, and the frequency and severity of floods is expected to increase. However, NFIP's premium rates have not provided sufficient revenue to pay claims. As a result, FEMA still owed Treasury $20.5 billion as of March 2020, despite Congress cancelling $16 billion of debt in 2017. As GAO has reported in the past (GAO-17-425), Congress will need to consider comprehensive reform, including mitigation and structural changes to premium rates, to ensure NFIP's solvency.

NFIP has faced significant financial challenges over the years, highlighted by a rise in catastrophic flood events and its $20.5 billion debt to Treasury. Contributing to these challenges are repetitive loss properties—those that have flooded and received a claim payment multiple times. Acquiring and demolishing these properties is one alternative to paying for repeated claims, but questions exist about the cost, efficiency, and effectiveness of this approach.

The Wave of Concerns Facing the National Flood Insurance Program