Federal Prison Industries is a government-owned corporation that seeks to provide marketable job skills to inmates. It sells inmate-produced goods and services, mostly to federal agencies. A new law in 2018 began to allow these goods/services to be sold to nonprofits and the District of Columbia as well.

The goal of this program is to help inmates in their reentry into society. However, we found that the Bureau of Prisons—which manages this program—has not reviewed its impact on recidivism (a person's relapse into criminal behavior) in over 2 decades. We recommended that the Bureau evaluate the program and set a recidivism reduction goal. 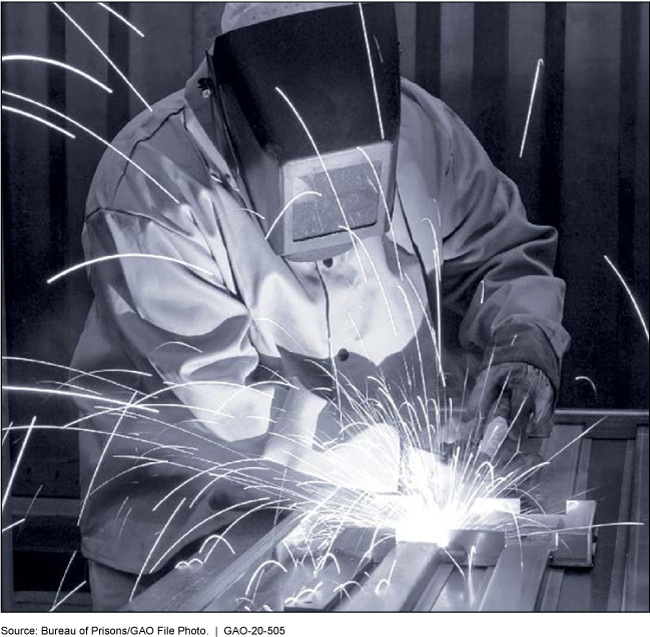 The First Step Act of 2018 made new, nonfederal markets and potential buyers available to Federal Prison Industries (FPI), a government corporation organized within the Bureau of Prisons (BOP); however, various challenges could limit FPI's ability to sell to customers in these markets. FPI makes apparel, personal protective equipment, and furniture, among other products. FPI may now sell to the District of Columbia government, including, for example, to its firefighters; nonfederal, governmental entities for use in correctional settings or in response to a disaster or emergency, such as local jails and first responders; and nonprofit organizations, such as universities. However, a lack of information makes it difficult to estimate the dollar value of these new markets.

The following figure depicts the new markets made available to FPI. 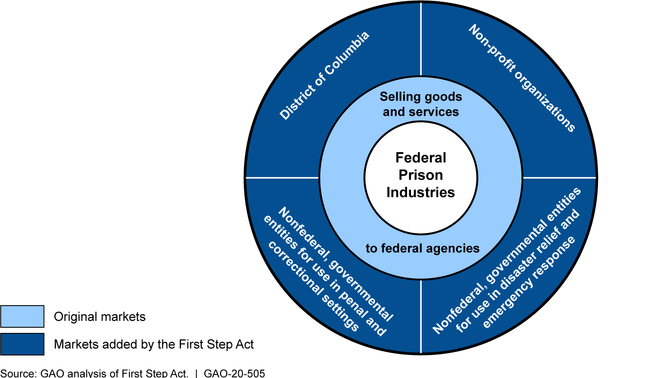 Data on the size of most of the new markets are very limited. For example, GAO found no existing national information to help estimate the size and scope of relevant spending by nonfederal entities on disaster relief and emergencies. Also, challenges related to state and local government operations, for example, could limit FPI's ability to sell products in the new markets made available under the First Step Act. Specifically, state-level prison industries and in-state vendors often have preferential access to many of the procurement markets now available to FPI.

FPI aims to assist inmates in their reentry into society by providing marketable job skills, but BOP has not reviewed FPI's impact on recidivism in over 2 decades. BOP relies on outdated studies that assessed the impact of FPI on inmates released in the 1980s. In January 2020, BOP cited a 1992 study as the basis for the Attorney General's designation of FPI as an Evidence-Based Recidivism Reduction Program under the First Step Act 0f 2018 . BOP made a plan to evaluate FPI but the plan's timeline passed and the BOP has not set a new one. Without an updated plan for evaluating FPI, BOP continues to rely on outdated evaluations of FPI and has limited information about FPI's effectiveness amidst changes to its inmate population Additionally, while BOP has reported some descriptive statistics on recidivism rates, it has not developed a goal. Without a timeline for evaluation and a goal for reducing recidivism, BOP's ability to assess the effectiveness of FPI will be limited.

FPI is a government owned corporation that, as a national reentry program, manages, trains, and rehabilitates inmates through employment. FPI sells inmate-produced goods and services primarily to federal government agencies. The First Step Act of 2018 authorized FPI to sell its products to new markets.

A provision in the First Step Act of 2018 required GAO to review various aspects of FPI. This report addresses (1) the potential size and scope of the additional markets made available to FPI under the First Step Act; (2) the similarities and differences in selected requirements and business practices of FPI and private sector sellers of products and services; (3) customers' satisfaction with FPI regarding quality, price, and timely delivery of its products and services; and (4) the extent to which BOP has evaluated the effectiveness of FPI and other vocational programs in reducing recidivism and the results. GAO examined recidivism studies and data, analyzed performance data, conducted fieldwork at four FPI facilities selected based on security level and type of products produced, met with industry associations, and interviewed agency officials and employed inmates.