The Department of Veterans Affairs intends the Medical Surgical Prime Vendor program to be the primary supply source for its 170 medical centers. But only 11% of centers met the VA's target for using the program.

The VA plans to revamp the program to fix some problems—like delivery delays and limited supply selection—but that has been delayed. The VA is piloting a similar DOD medical supply program at selected medical centers and has decided to expand it VA-wide but has yet to determine whether the pilot is successful.

We made 8 recommendations to the VA, including that it develop a plan for assessing the success of its DOD supply pilot. 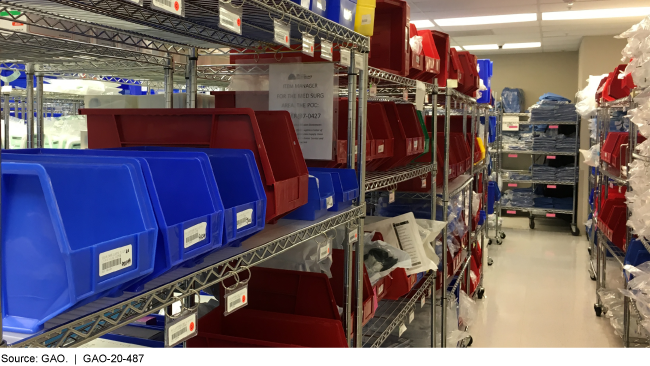 The Department of Veterans Affairs' (VA) Medical-Surgical Prime Vendor-Next Generation (MSPV-NG) program is intended to provide an efficient, cost-effective way for its 170 medical centers to order supplies. But only 11 percent of these centers met VA's target of using the MSPV-NG formulary—the list of supplies offered—for 90 percent of medical supply purchases. GAO met with 12 medical centers and found contributing factors, such as a manual formulary management system, that resulted in ordering errors and delivery delays. VA's planned MSPV 2.0 program is designed to fix some, but not all, issues. The manual formulary management system, among others, will remain unaddressed.

In addition, GAO found that supplies shipped directly from manufacturers instead of local warehouses—known as drop shipments—often result in late deliveries (see figure). About a third of supplies on the MSPV-NG formulary are drop-shipped, and this issue will continue under MSPV 2.0, as reducing drop-shipped items is not part of VA's planned changes under the new program.

VA is also piloting the use of the Defense Logistics Agency's (DLA) MSPV program at three VA medical centers to determine whether it provides a more effective means of obtaining required medical and surgical supplies than MSPV 2.0. VA started the pilot at one location but delayed rollout to the other locations by almost a year, to July and August 2020, because of technology integration challenges. VA has not established comprehensive metrics or criteria from which to determine the pilot's success or whether the pilot could be scalable to medical centers VA-wide. Without these metrics, VA risks not having an effective methodology for evaluating pilot success.

In September 2020, after GAO sent a draft of this report to VA for comment, senior VA officials stated VA has decided to implement DLA MSPV VA-wide in place of MSPV 2.0, and will continue to implement MSPV 2.0 in the interim. This planned approach makes assessing the outcomes of the implementation at the initial sites all the more important, to help VA understand potential challenges.

VA is developing the next iteration of its prime vendor program, MSPV 2.0, to meet the healthcare needs of about 9 million veterans. GAO's prior work found that VA medical centers' use of the MSPV formulary fell below targets in VA's prior iteration of the program and that VA lacked an overarching medical supply program strategy. In 2019, GAO elevated VA Acquisition Management to its High Risk List, in part due to its lack of an effective strategy for procuring medical supplies.

GAO was asked to review VA's MSPV program. This report assesses, among other things, VA medical centers' use of MSPV-NG and whether MSPV 2.0 will mitigate current program issues, as well as whether VA has measures for DLA MSPV pilot success and scalability. GAO analyzed VA and DLA documents and data, conducted site visits to 12 VA medical centers with higher medical supply spending, and interviewed VA and DLA officials within various levels at the agencies. GAO completed most of this review prior to March 2020, and, thus, did not address the COVID-19 pandemic.

GAO is making eight recommendations to VA, including that it examine opportunities to automate aspects of the formulary management process, reduce the number of drop-shipped items, and develop a plan to measure the success and scalability of its DLA MSPV pilot. VA agreed with GAO's recommendations.