Drug misuse—using illicit drugs or misusing prescription drugs—is a serious public health issue in the United States. National rates of drug misuse rose from 15% in 2003 to 19% in 2018.

We are adding drug misuse to our High Risk List in 2021 to encourage progress. Our High Risk List covers areas in need of transformation, or at high risk from fraud, waste, abuse, and mismanagement.

Federal agencies may struggle to focus on drug misuse during the COVID-19 pandemic. Yet the pandemic could fuel contributing factors of misuse—such as unemployment—stressing the long-term need to sustain and build upon ongoing efforts.

Prescription bottles, pills, and a syringe

Nationally, since 2002, rates of drug misuse have increased, according to GAO's analysis of federal data. In 2018, the Substance Abuse and Mental Health Services Administration reported that an estimated 19 percent of the U.S. population (over 53 million people) misused or abused drugs, an increase from an estimated 14.7 percent in 2003. People across a broad range of demographic groups—including sex, race or ethnicity, education levels, employment status, and geographic categories—reported misusing drugs (see figure below). 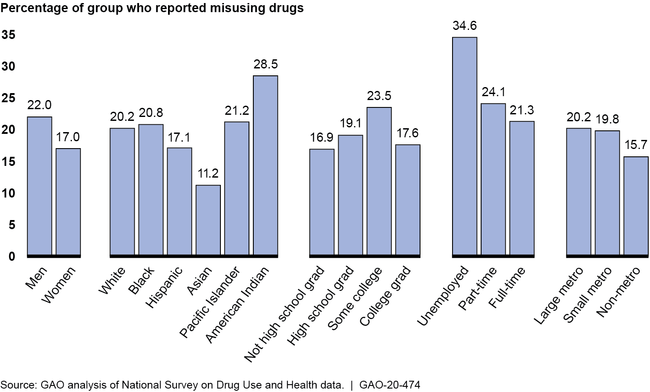 Rates of drug overdose deaths varied in counties across the nation in 2003 and 2017, the most recent year that county-level data were available (see figure below). In 2017, 43.2 percent of counties had estimates of more than 20 drug overdose deaths per 100,000 people, including 448 counties with rates that were significantly higher than this amount.

Note: CDC's National Center for Health Statistics used a statistical model to estimate rates of drug overdose deaths to account for counties where data were sparse because of small population size.

GAO work and other government and academic studies have found that the negative health and societal effects of drug misuse are widespread and costly—for example, the increased need for health care, human services, and special education; increased crime, childhood trauma, reduced workforce productivity; and loss of life.

The federal government is making progress in some areas, but a strategic, coordinated, and effective national response—with key sustained leadership from federal agencies—is needed. This report identifies opportunities to strengthen the federal government's efforts to address this persistent and increasing problem. These opportunities include addressing challenges in providing sustained leadership and strengthened coordination; the necessary capacity to address the crisis; and systems to measure, evaluate, and demonstrate progress. For example:

the Office of National Drug Control Policy should ensure effective, sustained implementation of the 2020 Strategy and future strategies;

the Department of Health and Human Services should provide guidance to states for the safe care for infants born with prenatal drug exposure, who may be at risk for child abuse and neglect;

the Drug Enforcement Administration should take steps to better analyze and use drug transaction data to prevent diversion of prescription opioids to be sold illegally; and

the State Department should develop and implement a data management system for all Caribbean Basin Security Initiative activities to reduce illicit drug trafficking or track data trends across countries.

In GAO's March 2019 High-Risk report, GAO named drug misuse as an emerging issue requiring close attention. Based on 25 GAO products issued since that time and this update, GAO has determined that this issue is high risk. Moreover, the severe public health and economic effects of the Coronavirus Disease 2019 (COVID-19) pandemic could fuel some of the contributing factors of drug misuse, such as unemployment—highlighting the need to sustain and build upon ongoing efforts. However, maintaining sustained attention on preventing, responding to, and recovering from drug misuse will be challenging in the coming months, as many of the federal agencies responsible for addressing drug misuse are focused on addressing the pandemic. Therefore, GAO will include this issue in the 2021 High-Risk Series update and make the high-risk designation effective at that time.

Drug misuse—the use of illicit drugs and the misuse of prescription drugs—has been a persistent and long-standing public health issue in the United States. Ongoing drug control efforts seek to address drug misuse through education and prevention, addiction treatment, and law enforcement and drug interdiction, as well as programs that serve populations affected by drug misuse. These efforts involve federal, state, local, and tribal governments as well as community groups and the private sector. In recent years, the federal government has spent billions of dollars and has enlisted more than a dozen agencies to address drug misuse and its effects.

This report provides information on (1) trends in drug misuse (2) costs and other effects of drug misuse on society and the economy, and (3) challenges the nation faces in addressing the drug crisis.

GAO analyzed nationally representative federal data on drug misuse and deaths from overdoses for 2002–2018 (the most recent available); reviewed selected empirical studies published from 2014–2019; and compared GAO's High-Risk list criteria to findings and recommendations in over 75 GAO reports issued from fiscal year 2015 through March 2020.

Since fiscal year 2015, GAO has made over 80 recommendations to multiple agencies responsible for addressing the drug crisis; over 60 of these recommendations have yet to be implemented.