Federal agencies are required, at times, to consult with tribes on infrastructure projects, like pipelines, that may harm tribes’ cultural resources.

We testified, based on reports we issued from 2018-2019, about laws and regulations that apply to cultural items and properties and about the consultation process. For example:

We’ve previously made 22 recommendations on how agencies can improve their tribal consultations. 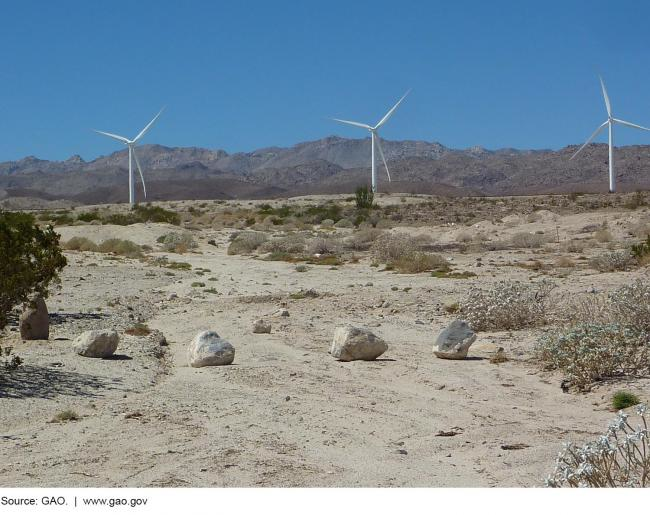 Wind turbines on a dry landscape with mountains in the background

Examples of federal laws and regulations that apply to Native American cultural resources include:

Section 106 of the National Historic Preservation Act (NHPA). In March 2019, GAO reported that section 106 of the NHPA and its implementing regulations require federal agencies to consult with Indian tribes when agency “undertakings” may affect historic properties—including those to which tribes attach religious or cultural significance—prior to the approval of the expenditure of federal funds or issuance of any licenses.

Agency consideration of tribal input . Sixty-two percent of the 100 tribes that provided comments to federal agencies in 2016 identified concerns that agencies often do not adequately consider the tribal input they collect during consultation when making decisions about proposed infrastructure projects.

GAO also found that the 21 agencies in GAO's review had taken some steps to facilitate tribal consultation. For example:

Eighteen agencies had developed systems to help notify tribes of consultation opportunities, including contact information for tribal leaders or other tribal officials.

Five agencies' tribal consultation policies specify that agencies are to communicate with tribes on how tribal input was considered.

Federal agencies are required in certain circumstances to consult with tribes on infrastructure projects and other activities—such as permitting natural gas pipelines—that may affect tribal natural and cultural resources. According to the National Congress of American Indians, federal consultation with tribes can help to minimize potential negative impacts of federal activities on tribes' cultural resources.

The Secretary of Homeland Security has waived federal cultural resource laws that generally require federal agencies to consult with federally recognized tribes to ensure expeditious construction of barriers along the southern U.S. border.

GAO recommended in March 2019 that 17 federal agencies take steps to improve their tribal consultation practices. The agencies generally agreed and one agency has implemented the recommendation.