We testified about the Department of Homeland Security’s efforts to ensure equal opportunity in employment at DHS.

For example, DHS uses things like employee surveys to help identify potential barriers and reported some improvements in representation of minorities and women from FY 2014 through 2017. However, it lacks performance metrics for tracking its progress.

Last year, we made 6 recommendations to DHS, including that it develop performance metrics for its equal employment program. DHS has agreed with our recommendations and has described its plans to address them. 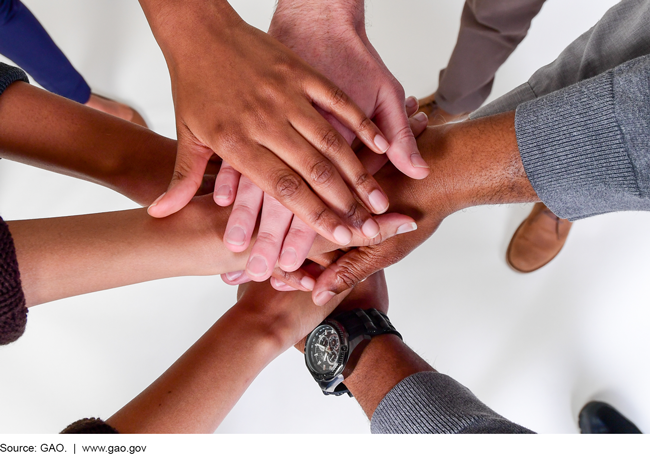 The Department of Homeland Security (DHS) uses multiple information sources to identify potential barriers to equal employment opportunity (EEO), but lacks performance metrics for tracking its progress towards eliminating identified barriers. DHS generally uses the information sources that the Equal Employment Opportunity Commission (EEOC) guidance recommends, such as employee survey results, to help identify potential barriers. While DHS reports some improvements in employee engagement and representation of minorities and women from fiscal years 2014 through 2018, it does not have complete performance metrics, such as the retention rate of women in law enforcement positions. Using performance metrics could help DHS assess its progress in eliminating barriers.

In addition, developing and using formal staffing models—a tool to determine the number of staff required—for their EEO programs could help DHS and its components to identify, request, and obtain the staff they need. For example, DHS and its components reported that staffing challenges contributed to some of their program deficiencies, and acknowledged they did not have formal staffing models for their EEO programs.

DHS has plans to address nine areas of noncompliance in its EEO program identified by EEOC. In its July 2017 review of DHS compliance with EEOC requirements, EEOC found that DHS did not provide complete demographic data on new hires and promotions in its fiscal year 2016 report to EEOC. DHS reported to EEOC that it had collected and analyzed such demographic data beginning in fiscal year 2019.

EEOC's Management Directive 715 requires that, to attract and retain top talent, federal agencies are to identify EEO barriers in their workforces and deficiencies in their EEO programs, execute plans to address them, and report annually to EEOC. GAO reported in 2009 on DHS's opportunities to address barriers to EEO in its workforce and in 2019 on DHS's challenges to ensuring EEO in its workforce.

GAO was asked to testify on the steps DHS has taken to (1) identify and address barriers to EEO in its workforce, (2) identify and address EEO program deficiencies, (3) address areas of noncompliance in its EEO program identified by EEOC, and (4) oversee and support components' EEO programs. To do so, GAO summarized the findings discussed in its July 2019 report on DHS's EEO efforts and reported on DHS's actions taken to address recommendations. To obtain updates on actions taken by DHS, GAO reviewed relevant documentation and interviewed DHS EEO officials.

In its July 2019 report, GAO recommended that DHS take six actions, including develop performance metrics for the department's EEO program; develop DHS and component formal staffing models; and analyze options for granting additional authorities to the most senior official for EEO and Diversity. DHS concurred with the six recommendations and described actions the department plans to take to address them.