A large 2017 wildfire in southwest Oregon destroyed 6 homes and threatened thousands more. Its smoke also contributed to respiratory and other health problems in nearby communities and hurt businesses and workers. The fire grew slowly over its first month before strong, hot winds caused a rapid expansion, as shown in this map.

Local officials, community members, and others questioned whether the Forest Service could have done more to suppress the fire. Forest Service officials said firefighters initially faced dangerous conditions and a low likelihood of success in remote, steep terrain, and that they prioritized firefighter safety. 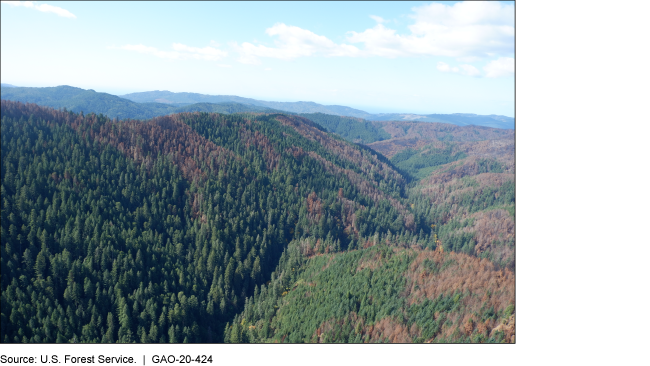 The Chetco Bar Fire was first reported in July 2017, burning in the Rogue River-Siskiyou National Forest in Oregon. Because of the remote, steep terrain, initial Forest Service attempts to fight the fire at close range were unsuccessful. The fire grew slowly over the next month. Firefighters, directed by the Forest Service, responded in various ways, such as by constructing “firelines”—clearing vegetation—in an effort to stop the fire's spread. In mid-August, strong, hot winds caused the fire to expand rapidly, from 8,500 acres to more than 90,000 acres over several days, threatening thousands of homes. Firefighters continued constructing firelines and dropped water and retardant on the fire to try to contain it. In September, the weather changed and cooler days and rain moderated the fire. Firefighers fully contained the fire in November (see figure).

Final Perimeter of the Chetco Bar Fire in Oregon, November 2017 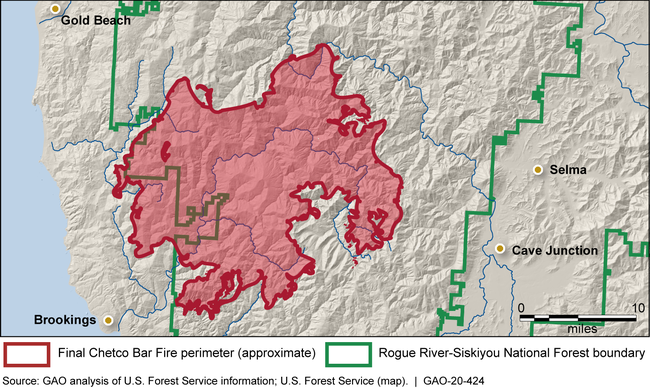 Forest Service officials and stakeholders raised a number of key concerns about the Forest Service's response to the Chetco Bar Fire. For example, some said that if the Forest Service's response had been more aggressive, it might have kept the fire from growing and threatening homes. Forest Service officials said that in making firefighting decisions, they prioritized firefighter safety and considered the likelihood that a particular response would be successful. The agency has taken steps to improve decision-making for future wildfires, such as developing a tradeoff analysis tool to help decision makers assess firefighting options.

Forest Service officials, stakeholders, and documents identifed various effects of the fire. Some of these sources cited negative effects including destruction of six homes, damage to roads and trails, and damage to habitat for the northern spotted owl. However, the fire likely improved habitat for some species, such as woodpeckers that eat beetles that feed on burned trees, according to officials.

A wildfire known as the Chetco Bar Fire began in the summer of 2017 in southwest Oregon and burned more than 190,000 acres over nearly 4 months. Since the fire began in a national forest, the Department of Agriculture's Forest Service played a key role in managing the firefighting response. Because the fire also threatened other lands, state and private firefighting entities were also involved.

GAO reviewed federal documents related to key events and the response, such as incident action plans and daily status summaries; analyzed reports on effects of the fire; and visited burned areas. GAO also interviewed Forest Service, state, and local officials involved in the response, as well as other stakeholders—such as representatives of nongovernmental organizations and community members—to discuss key concerns and effects of the fire. To identify the stakeholders, GAO reviewed documents and interviewed Forest Service officials and stakeholders, who suggested others to interview.