Congress and others have asked about Medicaid coverage of opioid addiction treatments for low-income pregnant and postpartum women. We looked at treatment services (e.g., outpatient therapy) that Medicaid can cover. The 6 states we reviewed generally covered most of them.

Questions have also been raised over Medicaid’s coverage of opioid screening and treatment for children. Nationwide, 31 states covered school telehealth services for opioid addiction, such as counseling via videoconference. As far as we could tell, these services haven’t been used. 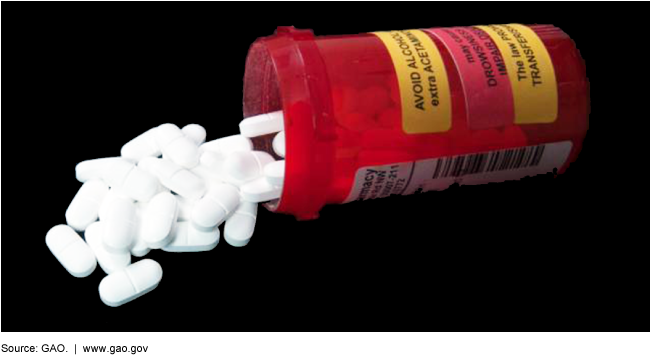 All state Medicaid programs are required to provide coverage of health care services to pregnant women with incomes at or below 138 percent of the federal poverty level through 60 days postpartum. With regard to opioid use disorder (OUD), GAO found that six selected state Medicaid programs provide coverage of a range of services for eligible pregnant women with OUD. Specifically, the six states—Alabama, Arkansas, Colorado, Massachusetts, South Dakota, and Texas—covered OUD services, such as screening for opioid use, counseling, and medication-assisted treatment, which combines the use of medications with counseling. In the six selected states, women who are eligible for Medicaid coverage after 60 days postpartum can receive most of the same OUD services that were covered during pregnancy. Furthermore, GAO found that the six selected states also use other sources of funding, such as federal grants, to provide coverage of OUD services for postpartum women who are not eligible for Medicaid. GAO did not review how frequently the OUD services were actually provided to pregnant and postpartum women.

GAO found that the state Medicaid programs in all six selected states cover annual screenings for substance use, which includes opioid use, for eligible children. This coverage is provided as part of Medicaid's Early and Periodic Screening, Diagnostic, and Treatment benefit, under which all states are required to cover certain screenings for eligible children under age 21.

GAO also found that Medicaid programs in 31 states and the District of Columbia covered OUD services, including screenings, delivered through telehealth in schools. However, state Medicaid officials said they were not aware of any instances of these services being utilized through telehealth in schools. Telehealth can be used to provide clinical care remotely, such as for screening, counseling, and therapy. Such services could be provided, for example, via a video conference on a desktop computer or laptop that connects a student in school with a provider in another location. State officials and experts cited both benefits and challenges with providing OUD services through telehealth in schools. For example, benefits included addressing provider shortages, particularly in rural areas, as well as reducing the amount of time students spend outside of the classroom accessing services. Challenges included lack of needed infrastructure and provider discomfort with using telehealth. Agencies within the Department of Health and Human Services (HHS) have recently issued guidance emphasizing the use of telehealth for OUD services, particularly in schools.

The misuse of prescription opioid pain relievers and illicit opioids, such as heroin, has contributed to increases in OUD and overdose deaths. Pregnant women with OUD have an increased risk of overdose during the postpartum period. Opioids also caused over half of drug overdose deaths among youth in 2017. Medicaid plays a key role in covering services to treat OUD for low-income women and children.

The SUPPORT Act includes a provision for GAO to study Medicaid coverage for pregnant and postpartum women with a substance use disorder, including OUD. The act also includes a provision for GAO to examine children's access to these services, such as through telehealth. This report describes Medicaid coverage of OUD services for (1) pregnant and postpartum women in selected states; (2) children in selected states; and (3) children delivered via telehealth in schools across all states, and utilization of these services.

GAO reviewed documentation and interviewed officials from federal agencies within HHS to understand Medicaid coverage of OUD services for pregnant and postpartum women, as well as children. GAO also interviewed officials and reviewed documentation from six states selected for variation in opioid use rates, status of Medicaid expansion, and geographic variation, among other things. GAO also conducted outreach and received responses from 49 of 50 states and the District of Columbia about Medicaid coverage and use of OUD services delivered via telehealth in schools.

HHS provided technical comments, which were incorporated as appropriate.