The Bureau of Land Management announced in 2019 that most of its employees in Washington, D.C., will be transferred to offices in western states.

We assessed the bureau’s reorganization efforts against key practices for agency reforms. The bureau established goals for the reorganization, but did not establish performance measures. We also found that the bureau’s implementation plan did not include milestones, which would help ensure that the reforms are being achieved as intended and in a timely manner.

We recommended that the bureau establish outcome-oriented performance measures to assess the effectiveness of the reorganization.

The Department of Interior building in Washington D.C., which includes BLM staff. 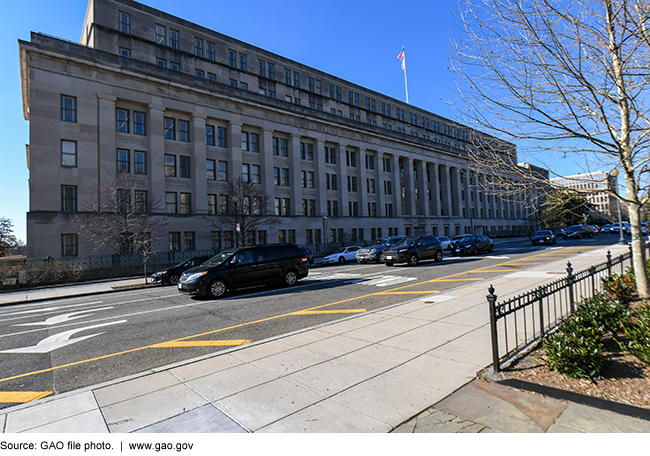 According to the Department of the Interior's (Interior) strategic plan, the department aimed to better enable its managers and workforce in the field to make decisions by, in part, shifting the workforce closer to field locations at a number of its bureaus. On May 8, 2019, Interior provided Congress with written notification of its intent to proceed with reorganizing the Bureau of Land Management (BLM) by relocating most Washington, D.C.-based headquarters positions to western states. In September 2019, BLM notified affected staff that their positions would be relocated and staff were to accept or decline reassignment by December 12, 2019. BLM expects the relocation to be completed by December 2020.

Specifically, BLM partially addressed key practices for establishing goals and outcomes by, for example, establishing broad goals for the reorganization. However, it did not establish performance measures that could be used to assess the effectiveness of the reforms. Further, BLM considered some costs and benefits of the reorganization, but its analyses did not include complete information on assumptions made, methodology, and relevant costs. For example, travel costs to Washington, D.C., from the new staff locations were recognized conceptually in a July 2018 Interior memo, but these costs were not included in the quantitative cost-benefit analysis.

BLM minimally or did not address key practices for involving employees and key stakeholders in developing its plan. Specifically, BLM sought input from its executive leadership team in February 2019, but documents the agency provided did not indicate what input the team provided, whether it was considered, or how it was used in formulating reorganization plans.

BLM partially addressed key reform practices for using data and evidence when developing reforms. For example, BLM developed a white paper on potential western locations but did not describe how it chose the location for its new headquarters. The agency also partially addressed key reform practices to manage and monitor reorganization efforts. Specifically, the implementation plan BLM provided to GAO contained high-level goals and a preliminary list of locations where staff would relocate, but did not include interim milestones or deliverables to show progress.

BLM also partially addressed key reform practices for strategic workforce planning. Specifically, BLM identified backup employees for leadership positions that were vacant and considered which vacancies were most important to fill, but it has not demonstrated how the proposed reorganization would affect the workforce, including staff retention. Additional strategic workforce planning would help the agency successfully implement the reorganization and ensure continued delivery of services.

Although BLM's reorganization is well under way, Interior has an opportunity to apply key practices for effective agency reforms as it continues to relocate BLM staff and considers reorganizing its other bureaus. Adopting effective practices for agency reform will help Interior ensure that the bureaus are well positioned to achieve intended reform goals and continue to deliver valuable services to the taxpayer.

In July 2019, the Secretary of the Interior announced that the majority of BLM employees assigned to the agency's headquarters in Washington, D.C., would be transferred to BLM offices in western states and that a new BLM headquarters would be established in Grand Junction, Colorado. According to a January 23, 2020, BLM document, of the 311 positions moving, 132 were vacant before the reorganization was announced in July 2019, resulting in 179 staff who needed to relocate. Of the 179 staff, 90 accepted their reassignments; 81 either declined the reassignment or separated from their position between July 2019 and January 2020, creating additional vacancies; and eight staff fell into other categories.

Additionally, Interior should ensure its bureau leadership incorporates key practices for effective agency reforms before implementing reorganization activities at other Interior bureaus. Interior neither agreed nor disagreed with GAO’s recommendations.