The principle of rule of law holds that all are subject to and equal before a nation’s laws. It serves as a foundation for democratic governance and economic growth, and helps combat crime and extremism.

The State Department and the U.S. Agency for International Development allocated more than $2.7 billion for rule of law assistance in FY 2014-2018. Afghanistan, Colombia, and Mexico got 40%. Money went to constitutional reform, building judicial institutions, and more.

U.S. agencies are to coordinate their rule of law efforts. We recommended that State assess whether all relevant agencies are doing so. 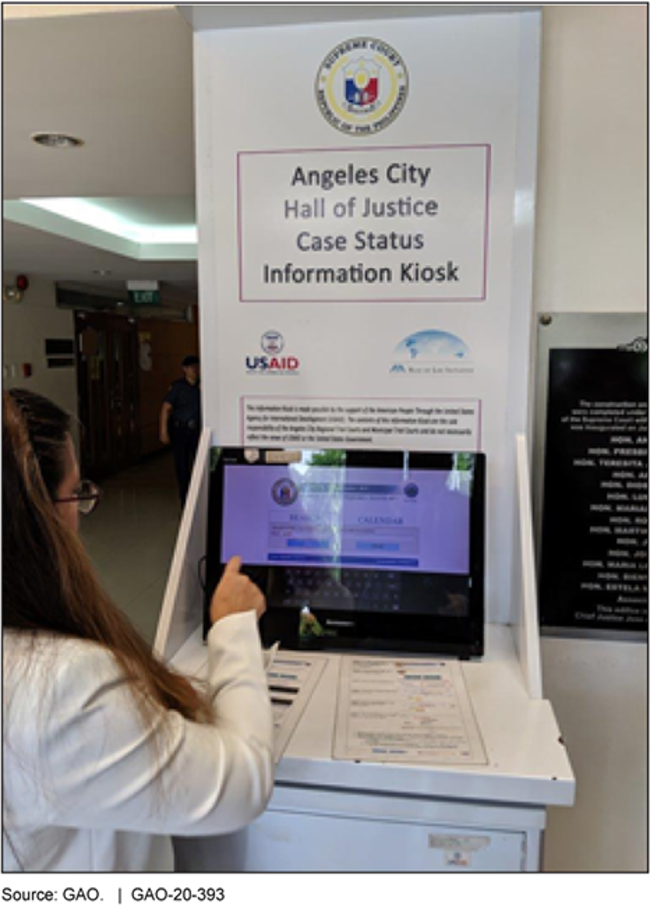 Woman at a kiosk

The Department of State (State) and the U.S. Agency for International Development (USAID) allocated more than $2.7 billion for rule of law assistance from fiscal years 2014 through 2018—the latest available data as of GAO's review. Of that, State allocated over $2 billion and USAID allocated over $700 million. State and USAID funded some of these programs through the Department of Justice (DOJ). Rule of law assistance funded a variety of activities including improving justice institutions, legal reform, and promoting a culture of lawfulness. The agencies implemented these programs globally but allocated most funds to the Western Hemisphere and Afghanistan.

Rule of law strengthens protection of fundamental rights, ensures a robust civil society, and serves as a foundation for democratic governance and economic growth. According to State, countries with a strong rule of law provide a more level playing field for American businesses to engage and compete, and countries with a weak rule of law can potentially export transnational threats and economic insecurity, undermining the interests of the United States.

GAO reviewed State, USAID, and DOJ documents and data for fiscal years 2014 through 2018 and interviewed officials in Colombia, Kosovo, Liberia, the Philippines, and Washington, D.C. GAO chose these countries on the basis of funding amounts and other factors.

GAO recommends that State require overseas missions where rule of law assistance funds have been allocated to assess whether this assistance is coordinated with all relevant interagency partners. State concurred with our recommendation.