For nearly two decades, the United States and Russia cooperated to upgrade security at dozens of Russian sites containing materials that could be used to build a nuclear weapon. This included modern fencing, surveillance cameras, and other improvements.

This work was incomplete when Russia invaded Ukraine in 2014 and cooperation was dramatically curtailed. Today, little is known about security at these sites, including the extent to which Russia has maintained U.S.-funded improvements.

Stakeholders told us there may be opportunities to work with Russia to improve nuclear material security, but that there would also be significant challenges. 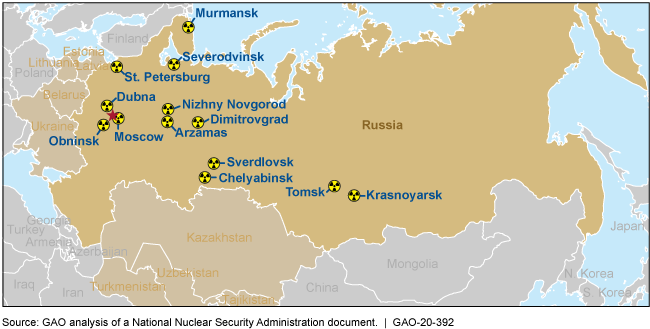 Over more than 2 decades starting in the early 1990s, the Department of Energy (DOE) and its National Nuclear Security Administration (NNSA) completed many of their planned efforts to improve nuclear material security in Russia, according to DOE documentation, U.S. government officials, and nuclear security experts. These efforts, carried out primarily through NNSA's Material Protection, Control, and Accounting (MPC&A) program, included a range of projects to upgrade security at dozens of Russian nuclear material sites, such as the installation of modern perimeter fencing, surveillance cameras, and equipment to track and account for nuclear material. However, not all planned upgrades were completed before cooperation ended in late 2014. NNSA also completed many—but not all—of its planned efforts to help Russia support its national-level security infrastructure, such as by helping improve the security of Russian nuclear materials in transit. In addition, NNSA made some progress in improving each site's ability to sustain its security systems, such as by training Russian site personnel on modern MPC&A practices and procedures. NNSA documentation that GAO reviewed showed that by the time cooperation ended, Russian sites had generally improved their ability to sustain their MPC&A systems, but this documentation showed that concerns remained.

Stakeholders said that there may be opportunities for limited future cooperation between the two countries to help improve Russian nuclear material security. Such opportunities could include technical exchanges and training. These opportunities could provide the United States with better information about the risk posed by Russia's nuclear materials and could help address areas of concern, such as by training Russian personnel to help sites better address the insider threat. However, any potential cooperation faces considerable challenges, according to stakeholders, most notably the deterioration of political relations between the two countries. In addition, stakeholders said that cooperation is challenged by current U.S. law, which generally prohibits NNSA from funding nuclear security activities in Russia; by Russian antagonism toward U.S. proposals to improve nuclear material security internationally; and by Russian conditions for cooperation that the United States has not been willing to meet.

Russia possesses the world's largest stockpile of weapons-usable nuclear materials, largely left over from the Cold War. These nuclear materials could be used to build a nuclear weapon if acquired by a rogue state or terrorist group. Starting in 1993, and for the next 2 decades, DOE worked with Russia to improve security at dozens of sites that contained these nuclear materials. In 2014, following Russian aggression in Ukraine and U.S. diplomatic responses, Russia ended nearly all nuclear security cooperation with the United States.

To address all three objectives, GAO interviewed U.S. government officials, personnel from DOE's national laboratories, and nongovernmental experts. In this report, GAO refers to all of these groups as stakeholders. GAO also reviewed relevant U.S. government plans, policies, and program documentation. GAO requested the opportunity to interview Russian officials and representatives at nuclear material sites for this review, but the Russian government denied this request.