The Nuclear Regulatory Commission licenses, inspects, and enforces regulations for the nuclear industry, including reactors and waste operations. NRC recovers about 90% of its budget by assessing fees for work done at NRC-licensed companies.

Since 2017, NRC has altered some of its fee-setting, billing, and budgeting processes in response to previous audits. For example, NRC implemented an electronic billing system and shared more information about how it sets fees.

But, NRC’s processes still need to be more transparent to help licensees plan and budget. Our recommendations are for NRC to improve communications and cost information for licensees. 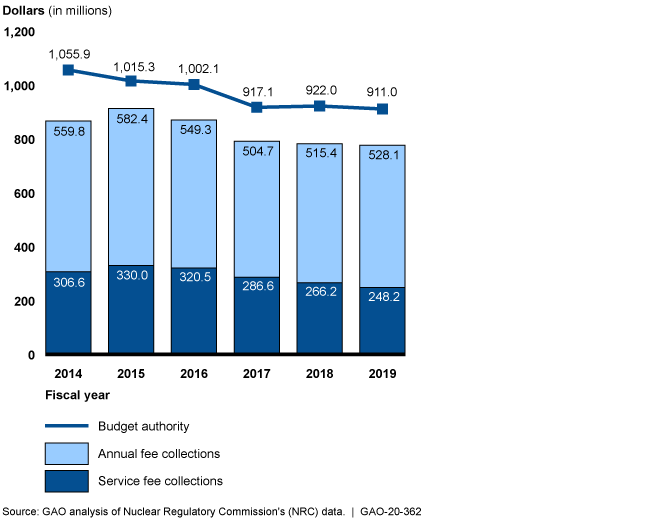 Since 2017, the Nuclear Regulatory Commission (NRC) has implemented changes to its fee-setting, billing, and budgeting processes in response to GAO, the NRC Office of Inspector General (OIG), and internal agency findings and recommendations:

Billing . NRC has improved the timeliness and accuracy of its billing process by, for example, implementing an electronic billing system and a standardized process to validate licensee charges. However, the billing information the agency provides licensees is not fully transparent in two areas.

First, multiple licensees that GAO interviewed stated that NRC's project managers do not always communicate about that status of regulatory actions, which can cause the licensees' bills for NRC's oversight to be higher than expected. One of NRC's program offices has a policy regarding when to communicate information on the progress of work performed on ongoing regulatory actions, but the remaining NRC program offices GAO spoke with do not, nor is there agencywide policy or guidance. NRC's Principles of Good Regulation, which includes guidance on transparency, lists openness as a key principle, including communicating with licensees. By developing guidance about when NRC staff are to communicate information to licensees on the progress of work performed on ongoing regulatory actions, NRC could facilitate planning and budgeting for licensees.

Second, NRC did not clearly define what costs are included across all its public cost estimates for common regulatory actions. NRC created the estimates as a transparency measure to assist stakeholders—including licensees and potential applicants—with planning for the costs of future NRC oversight activities. However, NRC did not specify what costs are included across these cost estimates, such as those related to project management. According to GAO's analysis of NRC documents, such costs for some NRC actions can account for about two thirds of total hours billed. By clearly defining the costs in its public cost estimates, NRC could enhance transparency and increase the value of the estimates as a budgeting and planning tool for stakeholders, in accordance with NRC's Principles of Good Regulation.

Budgeting . NRC has made some changes to its budgeting process to better enable stakeholders to determine how it spent its appropriation. For example, starting in fiscal year 2018, NRC began presenting actual obligation data and more detailed information on the status of funds it carried over from prior fiscal years in its annual budget justification.

NRC regulates the commercial nuclear industry. In that role, the agency provides services for regulated entities that hold licenses—that is, licensees. NRC recovers the majority of costs for these services by setting fee rates and using those rates to bill licensees. In 2017 and 2018, GAO recommended actions to improve NRC's fee-setting, billing, and budgeting processes, and NRC OIG and internal agency initiatives recommended additional actions. However, industry stakeholders continue to identify challenges with these processes.

GAO was asked to review NRC's (1) fee-setting, (2) billing, and (3) budgeting processes. This report examines NRC's progress since 2017 implementing changes to those processes in response to GAO, NRC OIG, and internal agency findings and recommendations.

GAO identified relevant GAO, NRC OIG, and internal agency recommendations and evaluated NRC's progress implementing those using evidence such as NRC's fee rules and budget documentation. GAO also spoke with NRC officials and interviewed a non-generalizable sample of NRC licensees, who were selected based on the amount of fees NRC charged them from fiscal years 2014 through 2018.

GAO recommends that NRC (1) develop guidance on when to communicate work progress information to licensees, and (2) ensure costs are clearly defined in its public cost estimates. NRC neither agreed nor disagreed but plans to review these processes. GAO believes its report supports implementation of these recommendations.