It is unclear whether the Departments of State and Energy kept Congress “fully and currently informed” of nuclear cooperation negotiations with Saudi Arabia, as required by the Atomic Energy Act. These negotiations are stalled over nonproliferation conditions.

We recommended that the agencies commit to regular, substantive briefings to Congress and that Congress consider amending the Atomic Energy Act to specify the timeliness and substance of briefings. 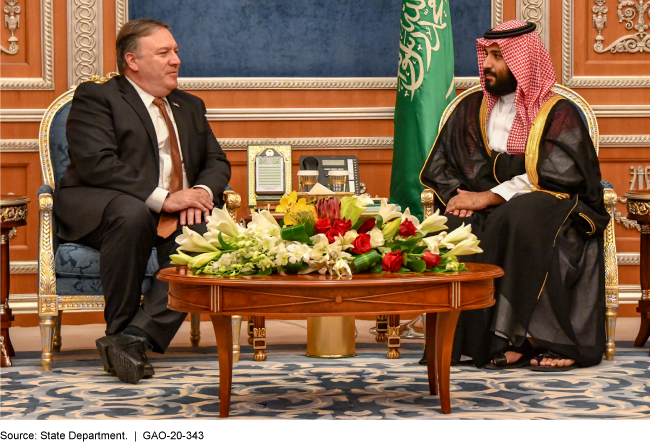 Since 2008, when the United States and Saudi Arabia signed a memorandum of understanding on nuclear energy cooperation, the current and prior U.S. administrations have engaged in discussions and negotiations about nuclear cooperation with the Saudi government. However, these negotiations are stalled; the two countries have not been able to resolve disagreements on several nonproliferation conditions, including Saudi Arabia agreeing to enrichment and reprocessing restrictions and signing an Additional Protocol with the International Atomic Energy Agency (IAEA), which would allow IAEA to obtain additional information about and access to Saudi nuclear activities.

U.S.-Saudi Interactions Where Nuclear Cooperation Was or May Have Been Discussed

Note: Interactions depicted in this figure include meetings, phone calls, and a letter, among other things.

Second, GAO was unable to determine whether the agencies kept the committees fully and currently informed. GAO identified two briefings on the negotiations—in December 2017 and January 2018—to the relevant committees, but it does not appear that these committees were briefed until more than a year after the March 2018 formal negotiations. According to congressional staff, Congress on occasion learned of developments through non-agency sources and had to apply forceful measures, including holds on nominations, to get information from the executive branch. By committing to regular briefings to Congress on nuclear cooperation negotiations and initiatives, State could better support congressional oversight on nuclear nonproliferation matters. In addition, congressional staff have said the AEA allows for broad interpretation of the “fully and currently informed” requirement. By specifying, through an amendment to the AEA, its expectations for timeliness and information provided by the agencies on nuclear cooperation negotiations and initiatives, Congress could have better assurance that it receives the information it needs for oversight of nuclear nonproliferation matters.

U.S. policy has long sought to balance U.S. civilian nuclear exports with the nation's obligation to ensure that they are not used to proliferate nuclear weapons. The Atomic Energy Act (AEA) provides a framework for certain civilian nuclear exports and outlines the requirements for nuclear cooperation agreements, including that certain nonproliferation conditions be met; that State conduct negotiations with the technical assistance and concurrence of DOE; and that the President keep certain congressional committees fully and currently informed of negotiations or initiatives.

This report describes, among other things, (1) the status of U.S.-Saudi negotiations and any areas of disagreement and (2) what is known about U.S. agency management of the negotiations. GAO reviewed the AEA and documentation of interactions between U.S. and Saudi officials regarding nuclear cooperation. GAO received limited information from State and DOE officials during the review but interviewed over 30 other stakeholders, including former senior executive branch officials, former congressional staff, and others with knowledge of and insights into nuclear cooperation issues and the negotiations.