From fiscal years 2013 through 2018, the Department of Defense (DOD) obligated about $2 billion annually to 10 DOD-sponsored Federally Funded Research and Development Centers (FFRDC), excluding obligations related to two intelligence programs and capital equipment costs (such as antenna or radar systems). Of these obligations, roughly $400 million annually went to a subset of five FFRDCs called Study and Analysis (S&A) Centers.

Department of Defense Obligations by Category of FFRDC, Fiscal Years 2013-2018 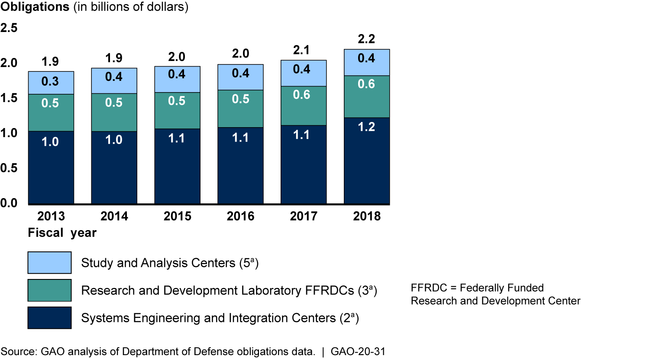 Note: Obligation amounts were not adjusted for inflation and totals may be affected by rounding.

aNumbers in parentheses refer to the number of FFRDCs within each category.

DOD primarily cited strategic relationships between the sponsor (the agency responsible for the overall use of the FFRDC) and the FFRDC and the core competencies of the FFRDC as factors when sponsoring S&A Centers and initiating projects. For example:

Strategic relationships. The Army determined that an S&A Center was uniquely qualified to conduct a research project that required knowledge of defense planning scenarios, noting that awarding the project to an industry contractor would have given that contractor a competitive advantage.

S&A Centers perform hundreds of research projects annually on behalf of DOD, and DOD reported using them to inform decisions, shape guidance, and identify opportunities to improve efficiency. For example, one S&A Center's study on the causes of weapons system cost overruns found DOD needed to re-examine its assumptions when estimating program cost, schedule, and performance. DOD officials told us the study contributed to policy, process, and training updates.

For decades, the government has contracted and entered into agreements to sponsor academic, nonprofit, or private organizations to operate FFRDCs. DOD military departments and other DOD components sponsor 10 FFRDCs to help develop innovative solutions to diverse national security threats. Five FFRDCs—referred to as S&A Centers—aim to provide independent analyses to support DOD policy development. Federal regulation and DOD guidance specify sponsors' oversight activities, including the establishment, use, and review of FFRDCs.

A Senate Armed Services Committee report included a provision that GAO review DOD's use of FFRDCs. This report describes, among other objectives: (1) DOD obligations (in dollars) to DOD's FFRDCs from fiscal years 2013 through 2018; (2) factors that led DOD to use S&A Centers for research; and (3) how DOD used this research. GAO analyzed obligation data for DOD's 10 FFRDCs. GAO focused further review on DOD's five S&A Centers that primarily provide studies and analysis. GAO analyzed sponsoring agreements, comprehensive reviews, and 22 S&A Center research projects selected based on factors such as obtaining a mix of project costs, and interviewed DOD and FFRDC representatives.