The U.S. Section of the International Boundary and Water Commission manages two wastewater treatment plants along the U.S.-Mexico border that treat raw sewage, mostly from Mexico. But population growth and aging plant infrastructure allow stormwater to bring bacteria, trash, and sediment from Mexico into the U.S.—affecting public health and the environment in Arizona and California.

The Commission has not taken comprehensive steps to resolve the problem, so we recommended that Congress consider directing the Commission to identify alternatives—including cost estimates and funding sources—to help resolve continuing water quality problems.

Corrosion of the International Outfall Interceptor (IOI) Pipe in Arizona 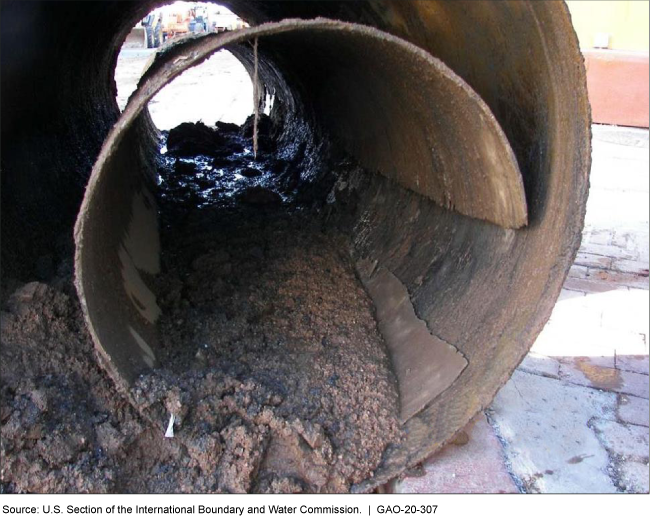 A 1944 treaty designated the International Boundary and Water Commission (IBWC) and authorized it to resolve water and boundary issues along the U.S.-Mexico border, including providing wastewater treatment. IBWC's two sections—the U.S. Section (USIBWC) and the Mexican Section, negotiated agreements to construct, manage, and operate two wastewater plants in Nogales, Arizona, and San Ysidro (South Bay), California, to resolve ongoing water quality problems stemming from sewage flowing downhill from Mexico into the United States (see figure). Several of these agreements describe each country's roles, such as sharing costs for the operation and maintenance of each plant.

Several factors can affect the plants' operations, including deteriorating infrastructure in Mexico and the United States that results in raw sewage spills around the plants. USIBWC has taken steps to resolve some of these factors. For example, USIBWC proposed a binational rapid response team to address broken pipes and failing pumps that can send sewage from Mexico into the United States; however, the team has not been formalized to ensure its long-term operation. By taking steps to formalize the team, USIBWC would have assurance it can more effectively address recurring infrastructure failures contributing to sewage spills.

USIBWC and others have taken some actions to address stormwater problems, such as studying stormwater flows in the Tijuana River Valley watershed and building some retention basins. However, USIBWC has not taken action, in coordination with federal, state, and local partners, to identify alternatives, cost estimates, funding sources, and time frames for implementing solutions in either watershed. USIBWC officials said without direction from Congress, it does not have specific authorization for stormwater management in the watersheds because the 1944 treaty and accompanying legislation did not authorize it to carry out such projects. The long-standing stormwater quality problems and their associated environmental and health effects suggest congressional direction is needed to authorize USIBWC to take action. Such action would include identifying alternatives, cost estimates, funding sources, and time frames.

Ongoing sewage spills and stormwater runoff carrying trash, sediment, and other pollutants in the Santa Cruz River Basin and Tijuana River Valley watersheds along the U.S.-Mexico border have affected public health, the environment, and local economies. Under the 1944 treaty, the United States and Mexico agreed to work together through IBWC to address these water quality problems. As part of this effort, USIBWC manages two wastewater treatment plants in Arizona and California. In 2018, the plants treated more than 14 billion gallons of sewage from Mexico.

This report (1) describes the authorities and roles for developing and managing the plants and sharing their costs; (2) examines factors affecting the operation of each plant and steps taken to address them; and (3) examines the extent to which USIBWC has taken actions to address water quality problems in the watersheds. GAO reviewed U.S-Mexico treaties, IBWC minutes and permits, and planning and budget data for USIBWC. GAO also interviewed officials from IBWC and other federal agencies, local and state governments, and non-governmental groups.

GAO believes that Congress should consider providing direction and specific authorization to USIBWC to take action to resolve stormwater quality problems in the Santa Cruz River Basin and Tijuana River Valley watersheds. GAO is also making two recommendations to USIBWC, including that it formalize the rapid response team. USIBWC concurred with that recommendation and partly concurred with the other.