Before a drug can be marketed in the United States, the FDA must determine it is safe and effective. The company or entity seeking to market the drug must submit evidence for review. FDA’s goal is to complete 90% of these reviews within deadlines that vary depending on the drug. Some drugs—ones that may provide significant improvement over what’s available—receive priority designations for expedited reviews.

We reviewed 637 new drug applications submitted from FY 2014-2018 and found the FDA met its goals. Differences in review times among FDA’s 17 divisions were largely driven by the characteristics of the applications being reviewed. 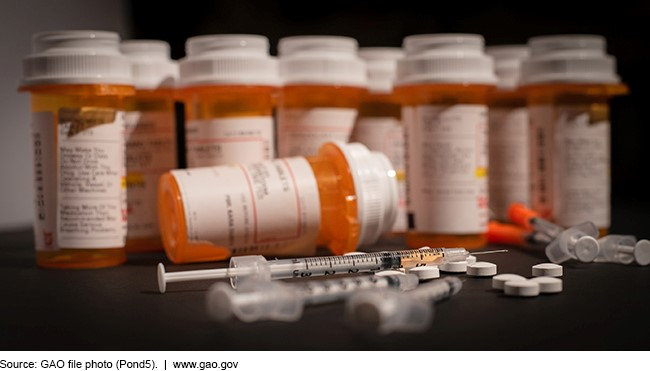 Four key features of new drug applications (NDA) are linked to the time the Food and Drug Administration (FDA) takes to complete initial reviews of NDAs. Three key NDA features determine the time frames for initial review that would meet FDA's goals under the Prescription Drug User Fee Act (PDUFA) and its reauthorizations, which authorize FDA to collect user fees from drug sponsors:

The fourth key NDA feature is whether or not it qualified for one or more of three other expedited programs for drugs intended to treat serious or life-threatening conditions.

GAO's analysis of 637 NDAs submitted from fiscal years 2014 through 2018 indicated that the proportion of NDAs with these key features differed among FDA review divisions. For example, 6 percent of the NDAs reviewed by the dermatology and dental division had a priority designation, compared to 56 percent for the anti-infective division. FDA has reported that some divisions, such as the oncology divisions, generally regulate products for conditions that are more likely to be serious or life-threatening, and, therefore, those products may be more likely to qualify for priority designation and other expedited programs.

Before a drug can be marketed in the United States, FDA must determine that the drug is safe and effective for its intended use through a review of evidence that a drug sponsor—the entity seeking to market the drug—submits in an NDA. The review is conducted by one of FDA's divisions (17, at the time of GAO's review) that each specialize in a specific group of drug products, such as hematology products. NDA reviews are complex, and may involve not only an initial review, but also reviews of resubmissions if the initial review does not result in approval. Under FDA's PDUFA commitments, FDA's goal is to complete reviews of 90 percent of NDAs within specific time frames linked to key features of the NDAs.

GAO was asked to examine NDA review times across FDA's divisions. In this report, GAO examines (among other things) differences between FDA divisions in the key features of the NDAs they review and initial review times, as well as the extent to which key NDA features contribute to these differences.

GAO analyzed data from FDA's Center for Drug Evaluation and Research regarding 637 NDAs submitted from fiscal years 2014 through 2018. These data also included biologic license applications submitted to the center. GAO excluded NDAs that were withdrawn by the applicant before FDA completed a review, as well as NDAs for which FDA had not completed a review by March 31, 2019. GAO also interviewed FDA officials about the agency's review process and these review times.