Medicare pays hospitals set amounts based on the diagnoses of the Medicare patients they serve. Small, rural hospitals that meet certain eligibility criteria can qualify for additional payments.

If those hospitals serve a high proportion of Medicare patients, they can apply for the additional payments under the Medicare-dependent hospital program. We found that between 2011 and 2017:

The number of Medicare-dependent hospitals decreased by about 28% because, for example, they became ineligible for the program, merged with other hospitals, or closed. 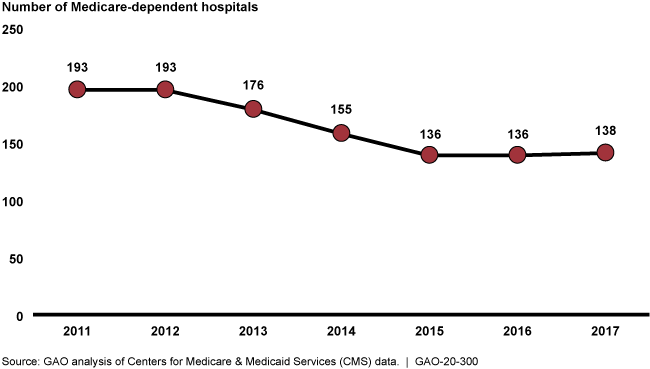 The Centers for Medicare & Medicaid Services (CMS) operates the Medicare-dependent Hospital (MDH) program, which assists hospitals that have 60 percent or more of inpatient days or discharges from Medicare patients, 100 or fewer beds, and that are generally located in a rural area. MDHs receive an additional payment if their historic costs in one of three base years adjusted for inflation, among other things, are higher than what the hospital would have otherwise received under the inpatient prospective payment system (IPPS). In contrast, if the IPPS amount was higher than historic costs, the MDH would receive no additional payment. In fiscal year 2018, CMS paid approximately $119 million in additional payments to MDHs. 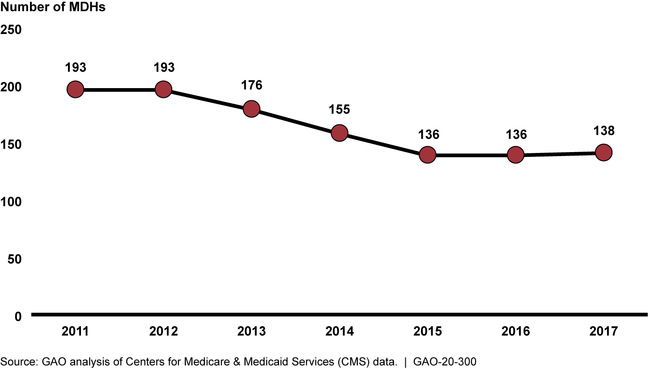 This report describes, among other things, the changes that occurred in the number of MDHs and selected metrics over time. GAO analyzed data submitted to CMS by hospitals from fiscal years 2011 through 2017—the most recent year for which consistent data were available at the time of GAO's analysis—among other CMS data. GAO also reviewed CMS regulations and other agency documents.