Uranium must be processed to use it in nuclear weapons or reactors. The National Nuclear Security Administration knows its uranium processing facilities are outdated and deteriorating.

As part of its overall uranium program, NNSA expects to complete a new processing facility for $6.5 billion by 2025—on budget and on time. In addition, the agency will modernize some, and transition out of other, deteriorating facilities in Oak Ridge, TN, for more than $850 million through 2026.

NNSA has made progress implementing our 2017 recommendation to better manage uranium program activities, such as developing a scope of work, cost estimate, and schedule. 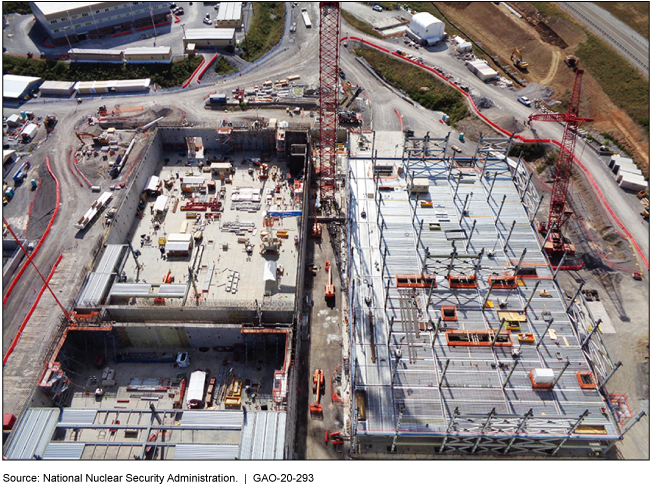 National Nuclear Security Administration (NNSA) documents and officials reported that the new Uranium Processing Facility (UPF) is on schedule and within budget. As of December 2019, three of the seven UPF subprojects were complete, and four were ongoing. NNSA officials told GAO they estimate that construction of the UPF will be complete in 2022 and that they expect to meet NNSA's goal of completing the UPF project for $6.5 billion by the end of 2025. As required, NNSA and its contractor developed a plan for starting operations at the UPF, which officials stated will likely occur in 2026. According to NNSA's plan, attaining full UPF operational capability will be the final step to enable NNSA to stop certain operations in Building 9212—the oldest building with the highest nuclear safety risk at the Y-12 National Security Complex (Y-12)—and turn it over to the Department of Energy (DOE) for final disposition by 2035.

In managing the UPF project, NNSA obtained independent cost estimates for the four largest UPF subprojects whose total estimated costs exceeded $100 million. Such estimates are required by DOE policy and to satisfy limitations in appropriations laws. Moreover, based on its review of NNSA documents, GAO found NNSA used those estimates to help inform the UPF's approved cost and schedule baseline estimates. NNSA officials stated that they used information from the independent cost estimate and other sources to help negotiate remaining work with the contractor and finalize the overall UPF's baseline estimates before starting construction.

Since GAO last reported on NNSA's broader uranium program in September 2017, NNSA identified and made progress in implementing the uranium program's scope of work that includes capabilities and other activities that are not part of the UPF project but are needed for weapons program. Specifically, NNSA made progress in the following areas:

1. developing process technologies that are expected to increase the efficiency and effectiveness of certain uranium processing capabilities;

2. investing in infrastructure to extend the operational lives of older uranium facilities; and

3. reducing the amount of uranium stored and used in these older uranium facilities.

NNSA has also made progress in implementing GAO's 2017 recommendation to develop key management information for the uranium program. Specifically, NNSA developed an integrated master schedule covering the scope of work for the program through fiscal year 2035 and a life-cycle cost estimate that includes program costs through fiscal year 2026. NNSA estimated that, in addition to completing the UPF project for $6.5 billion, the uranium program will spend over $850 million from fiscal years 2016 through 2026 to support modernizing other needed uranium processing capabilities and transitioning out of Building 9212.

A supply of enriched uranium is crucial to support the nation's nuclear weapons stockpile and the U.S. Navy, but the infrastructure of several U.S. uranium-processing facilities is outdated. In 2014, NNSA began plans to meet the nation's uranium needs by redirecting processing capabilities to the UPF and to other existing buildings NNSA plans to upgrade at Y-12 in Oak Ridge, Tennessee.

This report, which is GAO's sixth on the UPF, examines (1) the status of the UPF project and plans for starting UPF operations; (2) the extent to which NNSA has followed requirements to obtain independent cost estimates for the UPF, and how NNSA has used information from those estimates; and (3) the extent to which NNSA has made progress in developing uranium program management information since GAO's September 2017 report. GAO reviewed project and program documents on planning, schedule, cost, and implementation, and interviewed program officials.