When assessing the costs and benefits of proposed environmental regulations, federal agencies use estimates of the “social cost of carbon”—economic damages from increases in greenhouse gas emissions.

According to EPA, these gases stay in the atmosphere long enough to become “well mixed”—contributing to global damages regardless of their origin. Current national estimates are based on domestic damages and are about 7 times lower than prior estimates based on global damages.

In 2017, the National Academies recommended updating the estimating methods. We recommended that the Office of Management and Budget choose a federal entity to take the lead. 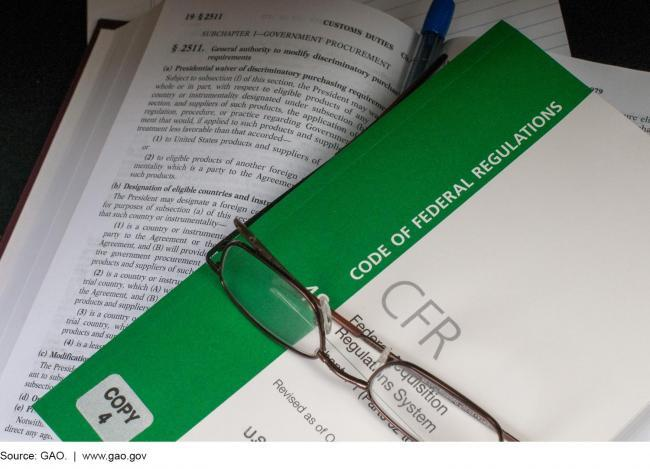 According to documents reviewed and interviews with officials from the Environmental Protection Agency (EPA), Bureau of Land Management (BLM), and National Highway Traffic Safety Administration (NHTSA), the federal government's current social cost of carbon estimates used in conducting regulatory impact analyses are lower than its prior estimates. Although both the prior and current estimates were calculated using the same economic models, two key assumptions used to calculate the current estimates were changed: using (1) domestic rather than global climate change damages (see table) and (2) different discount rates (3 and 7 percent rather than 2.5, 3, and 5 percent). As a result, the current federal estimates, based on domestic climate damages, are about 7 times lower than the prior federal estimates that were based on global damages (when both prior and current estimates are expressed in 2018 U.S. dollars and calculated using a 3 percent discount rate).

Prior and Current Federal Estimates of the Social Cost of Carbon, per Metric Ton, at a 3 Percent Discount Rate in 2018 U.S. Dollars

The federal government has no plans to address the recommendations of the National Academies of Sciences, Engineering, and Medicine for updating the methodologies used to develop the federal estimates of the social cost of carbon. In a January 2017 report, the National Academies made recommendations for updating the methodologies used to estimate the social cost of carbon to ensure federal estimates reflect the best available science. The Office of Management and Budget (OMB) in Circular A-4 provided guidance to federal agencies on how to conduct regulatory analyses, and in 2017 Executive Order 13783 directed agencies to use that guidance when estimating the social cost of carbon; both direct agencies to use the best available science. OMB staff GAO interviewed said the agency does not have specific plans for implementing the recommendations and that no federal agency has responsibility for addressing them. OMB staff told GAO that nonfederal entities are leading research efforts that are responsive to the recommendations, but no federal entity has responsibility for monitoring developments in scientific research or ensuring updated federal estimates consider such developments. However, OMB continues to play a leading role in the federal government's use of the social cost of carbon by having responsibility for the guidance in Circular A-4, which Executive Order 13783 directs agencies to be consistent with in developing their social cost of carbon estimates. By identifying a federal entity to be responsible for addressing the National Academies' recommendations, OMB would have better assurance that agencies use the best available science in their regulatory impact analyses.

To address climate change, some countries develop monetary estimates to assess the costs and benefits of government actions to reduce greenhouse gas emissions, including carbon dioxide. In the United States, in 2009, OMB convened an interagency working group to estimate the social cost of carbon—the dollar value of the effects of an incremental increase in carbon dioxide emissions in a given year—for assessing regulatory costs and benefits. In 2017, the National Academies recommended updates to the methods used to develop the estimates. Later that year, Executive Order 13783 disbanded the working group, withdrew its guidance, and directed agencies to ensure that, to the extent permitted by law, estimates are consistent with Circular A-4, OMB's general guidance for regulatory analysis. GAO was asked to review approaches for developing and using the estimates.

This report examines, among other objectives: (1) how the federal government's current estimates compare to its prior estimates and (2) how the federal government plans to address the recommendations of the National Academies. GAO reviewed executive orders, OMB guidance, and regulatory impact analyses and interviewed OMB, EPA, NHTSA, and BLM officials and staff who had conducted such analyses.

GAO recommends that OMB identify a federal entity responsible for addressing the National Academies' recommendations. OMB did not comment on the recommendation.