Department of Defense financial management has been on our High Risk List since 1995 in part because of deficiencies found in its supporting information systems. DOD uses these systems to report its spending and assets.

DOD doesn't track how much it spends on the systems. But we calculated it could be at least $2.8 billion in FY 2020.

We made 6 recommendations, including that DOD develop a road map for implementing its improvement strategy. 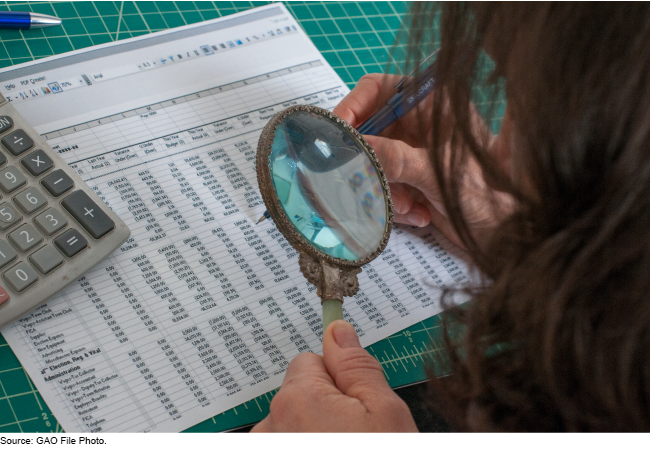 Data supporting the Department of Defense's (DOD) fiscal year 2019 financial statements are not reliable, according to the DOD Office of Inspector General (OIG) and independent auditors. In January 2020, the OIG reported that the department had wide-ranging weaknesses in its financial management systems that prevented it from collecting and reporting financial and performance information that was accurate, reliable, and timely. Specifically, the OIG reported 25 material weaknesses that impacted DOD's ability to achieve an unmodified audit opinion on its fiscal year 2019 department-wide financial statements. These material weaknesses are based, in large part, on identified deficiencies and corresponding recommendations, also known as notices of findings and recommendations (NFRs).

Figure: IT Notices of Findings and Recommendations Issued by Independent Public Accountants Based on Audits of Military Services' Fiscal Year 2019 Financial Statements

To address the NFRs and DOD's underlying financial management system weaknesses, the department has a strategy that fully addresses three requirements for a comprehensive and effective IT strategic plan; however, it does not include measures for tracking progress in achieving the strategy's goals. (See table on next page.)

◑ Partially addressed: DOD provided evidence that it addressed some, but not all, of this requirement.

aThe requirements for a comprehensive and effective IT strategic plan are based on Office of Management and Budget guidance and prior GAO research and reviews of federal agencies' IT strategic plans.

DOD has not developed an enterprise road map to implement its strategy, as called for by Office of Management and Budget guidance. Such a road map should document the current and future states of a systems environment that, among other things, describes business processes and rules, information needs and flows, and work locations and users; and a transition plan for moving from the current to the future. In response to recently enacted legislation requiring a comprehensive road map, DOD stated that it plans to develop one; however, it did not state by when.

DOD also does not have sufficiently detailed plans for migrating key military service legacy accounting systems to new systems. The Navy has developed a plan to migrate its system, but the plan is missing key elements consistent with Software Engineering Institute guidance. The Army and Air Force do not have detailed migration plans for their key accounting systems.

While DOD has developed a plan to address IT issues identified during annual audits, it has not established performance goals that include indicators, targets, and time frames. Officials said that it is challenging to develop such goals because issues identified by the IPAs vary widely. However, DOD has already grouped the issues by priority, facilitating the establishment of appropriate performance goals.

Moreover, DOD does not know how much it spends on the systems that support its financial statements because it does not have a way to reliably identify these systems in its systems inventory and budget data. GAO calculated that the department will spend at least $2.8 billion on those systems in fiscal year 2020. However, that amount is understated–GAO identified 45 systems that were missing from the list of significant systems that DOD provided to GAO.

As a result of these deficiencies, the department faces challenges in ensuring accountability over its extensive resources and in effectively managing its assets and budgets. DOD also risks wasting funds on short-term fixes that might not effectively and efficiently support longer-term department goals.

DOD financial management has been on GAO's High Risk List since 1995 because of long-standing deficiencies found in, among other areas, its supporting information systems. DOD uses these systems to report its spending and assets.

GAO made the following six recommendations to DOD:

DOD concurred with GAO's recommendations and described actions it plans to take to address them.