Every year in the U.S., hundreds of women die of complications related to pregnancy and childbirth. Mortality varies by race/ethnic group. For example, non-Hispanic black women are more than 3 times as likely to die as non-Hispanic white women, according to the CDC.

This report describes, among other things, Health and Human Services’ ongoing efforts to prevent these deaths. For example, it funds committees in 25 states that comprehensively review maternal mortality and identify ways to prevent it. Officials in the 5 states where we conducted interviews said they were beginning or continuing to address racial/ethnic health differences. 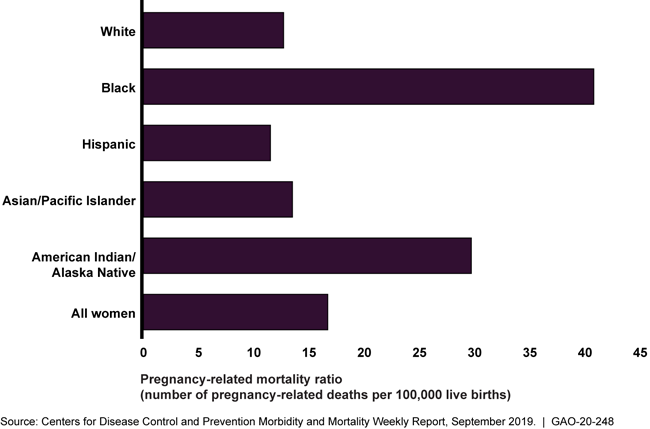 GAO reviewed documentation about HHS's surveillance efforts related to pregnancy-related deaths; and analyzed CDC data on leading causes of pregnancy-related deaths from 2007 through 2016 (the most recent 10-year period available at the time of GAO's review). GAO also reviewed documentation and interviewed HHS and state public health officials in five selected states about HHS's funding efforts aimed at reducing pregnancy-related deaths, including select efforts used in these states. GAO selected these states primarily based on their geographic diversity and their implementation of select efforts to address maternal mortality. GAO provided a draft of this report to HHS. HHS provided technical comments, which GAO incorporated as appropriate.

Notes: “Other cardiovascular conditions” includes conditions not reported separately as cardiomyopathy—when the normal muscle in the heart thicken, stiffen, thin out, or fill with substances the body produces that do not belong in the muscle, or cerebrovascular accidents—known as stroke.

Pregnancy-related death, as defined in statute, is the death of a woman while pregnant or within 1 year of the end of a pregnancy— regardless of the outcome, duration or site of the pregnancy—from any cause related to or aggravated by the pregnancy or its management, but not from accidental or incidental causes. 42 U.S.C. § 247b-12(e)(3).

White and black women were non-Hispanic. Hispanic women might be of any race. 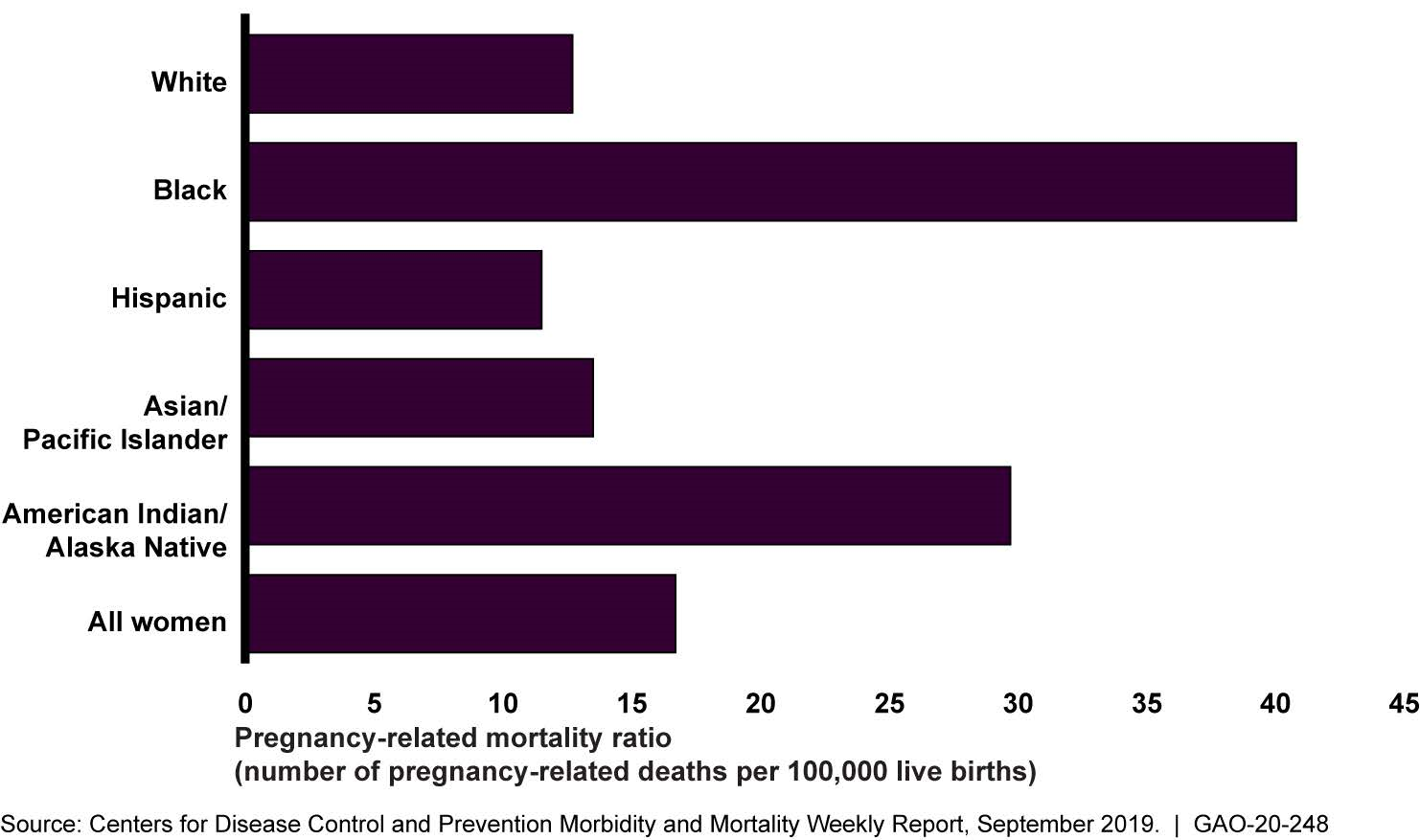 Notes: White, black, American Indian/Alaska Native and Asian/Pacific Islander women were non-Hispanic. Hispanic women might be of any race.

The Department of Health and Human Services has 13 ongoing efforts aimed at reducing pregnancy-related deaths. The following are key examples of these:

All five states also mentioned beginning or continuing to address racial/ethnic or other health disparities with block grant funding, through their Maternal Mortality Review Committees, or other efforts. For example, officials in one state said they use block grant funding to support their Black Infant Health Program, which helps address maternal morbidity and mortality of black mothers in the late maternal period. Additionally, two of the HHS funding efforts awarded in fiscal year 2019 have outcomes related to decreasing racial and ethnic disparities in maternal mortality: the Alliance for Innovation on Maternal Health Community Care Initiative and the State Maternal Health Innovation Program.

Maternal Mortality in the United States

April 11 was the International Day for Maternal Health and Rights. One crucial issue related to...
Blog Post