The National Mediation Board (NMB) helps airlines and railways and their related unions resolve labor disputes that could disrupt commerce in those industries. We are required by law to review NMB’s programs and activities every 2 years.

NMB implemented our prior recommendation to improve ethical standards for employees seeking outside employment; 6 others remain open.

Also, NMB doesn’t have the tools to effectively manage its appropriations. As a result, NMB has foregone several million dollars in funding that could have been used to accomplish agency goals. Among other things, we recommended NMB improve its monitoring processes in this area.

[This page has been updated to correct the source of the image.] 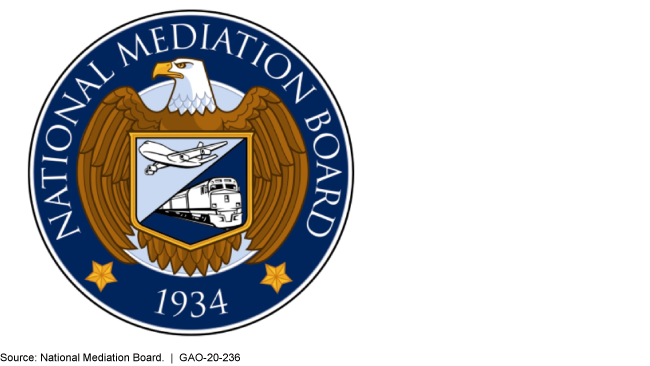 The National Mediation Board (NMB), which facilitates labor relations for airline and railway carriers, has implemented one of GAO's seven recommendations remaining from past reports (see table). Specifically, NMB has developed a policy to prevent violations of ethics rules regarding outside employment and monitors compliance with that policy. NMB has not yet fully implemented the other six recommendations. For example, NMB has developed some strategies to reduce its arbitration case backlog, but lacks a plan with goals and time frames to complete that work. Similarly, NMB has completed an organizational climate assessment, but still must take additional actions to address employee concerns. By not fully implementing these and other recommendations, NMB remains at risk of not fulfilling its mission in several key areas, including information security and organizational climate.

In this review, GAO found that, in addition to the six unimplemented recommendations, NMB lacks internal controls to effectively manage and oversee its appropriations and consistently follow its audit policies. NMB officials said the agency needed its full funding to address various agency priorities, such as hiring information technology specialists, but NMB did not use all of its funding for fiscal years 2016 through 2019, leaving a total of more than $4 million unobligated from those years; those funds are not available to NMB for new obligations. Officials said that hiring challenges and uncertainty concerning the agency's final appropriations made managing its budget resources difficult. NMB has a new process to monitor its budget resources, but has not documented that process. Without documenting that process, NMB may not be certain it uses its funding effectively to achieve its hiring and other goals. Additionally, NMB has not consistently followed its audit policy to address deficiencies identified in financial and other audits. For example, NMB did not create specific corrective action plans to address findings from financial or GAO audits. The NMB Board said it relied on senior managers to follow procedures, but the Board is ultimately responsible for ensuring that its managers implement the internal control system. Without a process to effectively oversee and evaluate its adherence to internal controls and its own audit policies, NMB may miss opportunities to achieve objectives, address audit deficiencies, and improve management oversight.

NMB was established under the Railway Labor Act to facilitate labor relations for airline and railway carriers by mediating and arbitrating labor disputes and overseeing union elections. The FAA Modernization and Reform Act of 2012 included a provision for GAO to evaluate NMB programs and activities every 2 years. GAO's previous reports, issued in December 2013, February 2016, and March 2018, included 13 recommendations for NMB based on assessments of policies and processes in several management and program areas. NMB had implemented six of those recommendations previously, leaving seven for our review.

This fourth report examines the (1) extent to which NMB has taken actions to fully implement GAO's remaining recommendations, and (2) other challenges NMB faces in key management areas and in overseeing its operations. GAO reviewed relevant federal laws, regulations, and NMB documents, such as its travel and telework policies; examined arbitration caseload data and the results of NMB's 2019 Organizational Climate Assessment; and interviewed NMB officials.

GAO is making four recommendations, including that NMB document its process for reviewing and monitoring the agency's annual appropriations to ensure effective use of funds, and establish a process for the Board to effectively monitor and evaluate NMB's adherence to audit policies. NMB agreed with GAO's recommendations.