Nearly 2 million Americans misused or were addicted to opioids in 2018. Medication-assisted treatment—which combines medications such as buprenorphine with behavioral therapy—can effectively treat opioid use disorders and overdoses.

Medicaid is one of the largest sources of coverage for individuals undergoing medication-assisted treatment. The Department of Health and Human Services has worked to increase access to the treatment.

We identified state policies that can restrict Medicaid beneficiaries’ access to medication-assisted treatments, and recommended that HHS ensure states comply with federal requirements to cover them. 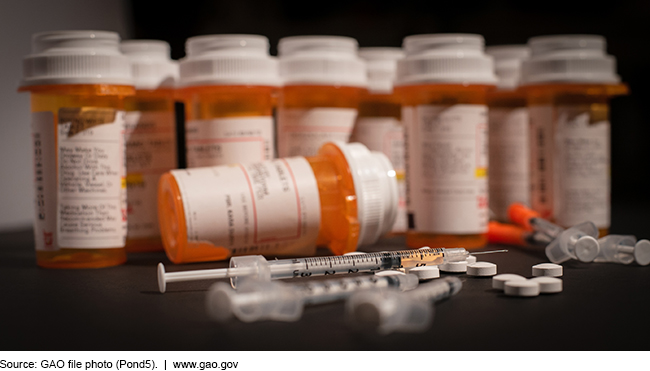 Prescription bottles, pills, and a syringe with a needle

Medication-assisted treatment (MAT)—which combines behavioral therapy and the use of certain medications, such as buprenorphine—has been shown to be effective at reducing the misuse of or addiction to opioids and increasing treatment retention. The federal government has identified expanding access to MAT as important for reducing opioid use disorders and overdoses, and has taken action to increase access. However, GAO found that some state and federal policies can restrict Medicaid beneficiaries' access to MAT medications. Some of these policies, and three selected states' and the District of Columbia's efforts to address potential access barriers, include the following:

MAT medication coverage. A 2018 study found that about 40 percent of states may not provide Medicaid coverage for some formats of MAT medications, such as injectable and implantable formats, as required by federal law; however, the Centers for Medicare & Medicaid Services (CMS), which oversees Medicaid, has not determined the extent to which states are in compliance with the federal requirements to cover MAT medications.

Distribution methods. States may mandate the ways MAT medications can be distributed. For example, Minnesota's fee-for-service plan requires the use of the buy-and-bill distribution method for all injectable and implantable medications. This method requires providers, such as physicians, to purchase and store these medications until administered to the patient, allowing immediate access to the MAT medication for Medicaid beneficiaries. However, for expensive injectable medications, which can cost $1,200 per treatment, this method places providers at financial risk if the medication is not used or the reimbursement is less than the providers' costs, requiring resources some providers may lack, according to providers in the selected states and District of Columbia. As a result, some states have removed such restrictions to maximize beneficiary access.

Federal waiver for prescribing buprenorphine. According to stakeholders GAO interviewed, some providers are unwilling to obtain the federal waiver necessary to prescribe or administer buprenorphine for opioid use disorder—due to reasons such as the hours of training associated with the waiver—which can restrict beneficiary access to this MAT medication. In addition, while nurse practitioners and physician assistants are eligible for these waivers, some state laws require them to be supervised by a physician. Stakeholders told GAO that some nurse practitioners may find it difficult to identify a qualified physician, which may affect patient access to MAT.

Almost 70,000 people died from drug overdoses in 2018, an estimated 69 percent of which involved opioids. Medicaid, a joint federal-state health care program for low-income and medically needy individuals, is one of the largest sources of coverage for individuals undergoing treatment for opioid use disorder.

To do this work, GAO reviewed relevant laws, policies, and documents, as well as studies describing access barriers and the benefits and challenges of the distribution methods. GAO also interviewed federal officials; stakeholders representing state Medicaid directors, health care providers, patients, and pharmacies; and state officials and health care providers from Minnesota, North Carolina, and Ohio, as well as the District of Columbia. GAO selected these three states and the District of Columbia based on their Medicaid programs' coverage of the MAT medications, their programs' spending for the treatment of opioid use disorder, and other criteria.

GAO recommends that CMS determine the extent to which states are in compliance with federal requirements to cover MAT medications, and take action as appropriate. HHS concurred with this recommendation.