Commercial fishing landed more than $1 billion worth of seafood from the South Atlantic and Gulf of Mexico in 2016, and recreational anglers made about 127 million fishing trips.

To help manage fisheries, the National Marine Fisheries Service and regional councils may allocate fishing privileges to the commercial and recreational sectors for red snapper, wahoo, red grouper, and other fish.

Stakeholders told us that a clear process for reviewing allocations would increase their confidence in and understanding of the councils’ decisions. Our recommendations include developing documented processes for allocation reviews to increase transparency.

Examples of Fish with Allocation Reviews Underway as of December 2019: Wahoo (South Atlantic) and Red Grouper (Gulf of Mexico) 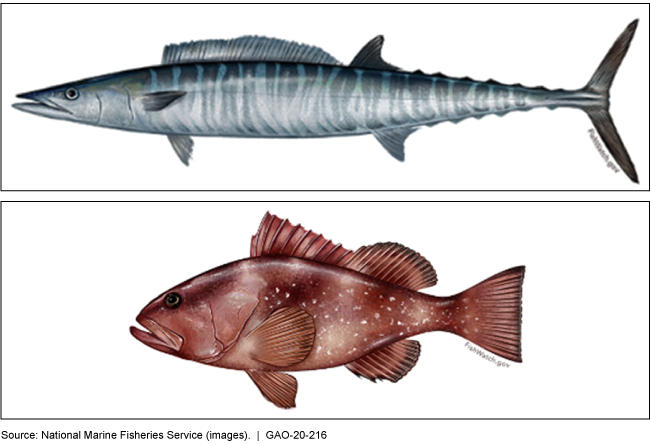 The South Atlantic and Gulf of Mexico regional fishery management councils, with approval from Department of Commerce's National Marine Fisheries Service (NMFS), established and revised allocations to varying degrees for mixed-use fish stocks—fisheries with a combination of commercial and recreational fishing. Regional councils were created by statute to help manage fisheries in federal waters, including allocating—or distributing—fishing privileges, when warranted. Starting in 1985, the South Atlantic council established allocations, generally a percentage of allowable harvest, for 50 of its 51 mixed-use fish stocks and revised most of those at least once. The Gulf of Mexico council established allocations for nine of its 23 mixed-use fish stocks, revising three of those once. Historically, allocations have been largely based on estimates of the commercial and recreational fishing sectors' past use of the resource, according to NMFS.

Key sources of information that may be available to help NMFS and the councils review allocations include trends in catch and landings (the amount of fish caught or brought to shore); fish stock assessments; and economic analyses. Each source presents some challenges in supporting allocation decisions, however. For example, NMFS works with states to estimate recreational catch, which provides information about demand, but faces difficulties generating reliable estimates. This is in part because of attributes of the recreational fishing sector, including the greater number of recreational anglers compared with commercial fishing participants. NMFS issued guidance in 2019 to promote consistency in estimating recreational catch data to help improve the quality of the information.

The South Atlantic and Gulf of Mexico councils developed processes for when to initiate fish stock allocation reviews, but not for how to conduct those reviews. A 2012 report for NMFS found that reviews had been done inconsistently, and stakeholders were dissatisfied with allocation decision-making. In response, NMFS developed guidance calling for structured and transparent allocation review processes. Both councils established criteria for initiating reviews, such as time-based triggers, and as of December 2019 they had several reviews underway (see figure). In April 2019, the Gulf of Mexico council began convening a workgroup to propose a draft allocation review process, but has not indicated what actions it will take, if any, in response to a proposal. The South Atlantic council postponed any discussions until March 2020. As of December 2019, neither council had a documented process. Documented processes for conducting allocation reviews would provide NMFS with better assurance that the councils carry out upcoming reviews in a structured and transparent manner.

Commercial and recreational marine fisheries—including those in the South Atlantic and Gulf of Mexico—are critical to the nation's economy, contributing approximately $99.5 billion to the U.S. gross domestic product in 2016, according to the Department of Commerce. NMFS and the councils may allocate fishing privileges for mixed-use fisheries in federal waters, but establishing and revising such allocations can be complex, in part because of concerns about equity.

The Modernizing Recreational Fisheries Management Act of 2018 includes a provision for GAO to review mixed-use fisheries allocations in the South Atlantic and Gulf of Mexico. For these regions, this report examines (1) the extent to which the councils established or revised mixed-use fisheries allocations, (2) key sources of information that may be available for reviewing allocations, and (3) the extent to which the councils have developed processes to help guide such reviews. GAO reviewed NMFS and council policies and other council documents; analyzed information on allocations established and revised; compared council processes to agency guidance and internal control standards; and interviewed NMFS officials, council members and staff, and 46 stakeholders that reflected various interests. Views from these stakeholders are not generalizable.

GAO is making two recommendations, including that NMFS work with the councils to develop documented processes for conducting allocation reviews. The agency agreed with GAO's recommendations.