Improving economic status through hard work, education, and investment has been the “American Dream” for generations. But is it out of reach for Millennials? We looked into it and found:

Over the last 40 years, fewer Americans are making more than their parents did at the same age

Millennials are highly educated, but it’s not clear whether this will boost their income in the long run

Many Millennials Are Worried about Their Financial Futures 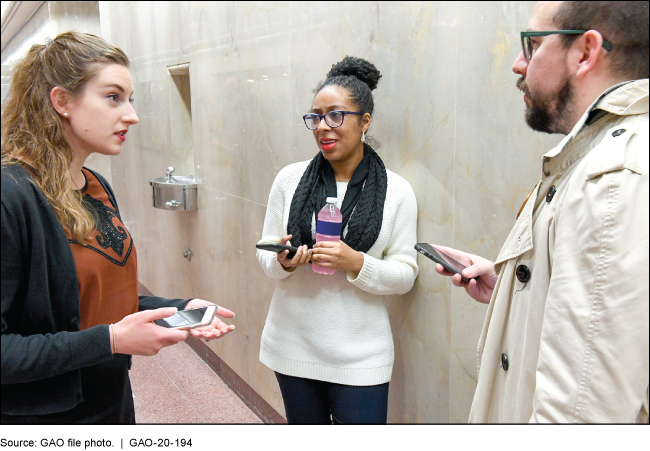 A group of people talking against a wall

Recent research indicates that, across three key measures, economic mobility in the United States is limited. Specifically, the Millennial generation (those born between 1982 and 2000) might not have the same opportunity as previous generations had to fare better economically than their parents. According to studies GAO reviewed, the share of people making more money than their parents at the same age (absolute mobility) has declined over the last 40 years, and the chances of moving up the income distribution (relative mobility) have been flat over time. Using a third measure of economic mobility (intergenerational income elasticity), researchers have found that income in adulthood is linked to how much a person's parents made, and that between one-third and two-thirds of economic status is passed down from parents to children. This is especially true of the lowest and highest income groups. Researchers also identified race and geography as key determinants of an individual's economic mobility.

Millennials have different financial circumstances than Generation X (born 1965-1981) and Baby Boomers (born 1946-1964), and in light of flat or declining economic mobility, there is uncertainty about how they will fare financially as they age. A snapshot of data that allowed GAO to compare Millennials aged 25-34 to the previous two generations at similar ages showed that Millennial households were more likely than other generations to be college educated; however, incomes have remained flat across the three generations, implying that Millennials have not yet benefited from the potential additional lifetime income earned by college graduates. Millennial households had significantly lower median and average net worth than Generation X households at similar ages (see figure), especially among those with low net worth. Median net worth for the lowest quartile of Baby Boomers and Generation X was around zero, but it was substantially negative for Millennials, indicating that debt was greater than assets for the median low net worth Millennial household. Regarding assets, a significantly lower percentage of Millennials owned homes compared to previous generations at similar ages, but had retirement resources at rates comparable to Generation X and Baby Boomers. Finally, Millennials were more likely to have student loan debt that exceeded their annual income. It remains to be seen how these factors will affect Millennials' financial circumstances in the long run, including retirement.

Estimated Median Net Worth for Baby Boomer, Generation X, and Millennial Households in the 25-34 Age Range, in 2016 Dollars

The idea that individuals should have the opportunity to economically advance beyond the circumstances of their birth is a familiar element of the American Dream. In an economically mobile society, it is possible for individuals to improve their economic circumstances through effort, education, investment, and talent. In addition to opportunities through the private, public, and nonprofit sectors, the federal government also promotes economic mobility through many efforts, including supporting education, job training, business incentives and development, and child health and well-being programs.

However, a recent survey indicates that over approximately the last two decades fewer people report being satisfied with the opportunity to get ahead by working hard. According to recent studies, the Millennial generation, who comprise the largest portion of the American workforce, report feeling overwhelmed by their financial situation and concerned about their future financial security.

GAO was asked to review trends in economic mobility and Millennials' economic situation compared to previous generations. This report examines (1) what is known about intergenerational income mobility, and (2) how the financial circumstances of Millennials compare to previous generations. To perform this work GAO conducted an extensive literature review and analyzed data from the nationally representative Survey of Consumer Finances.