Forest Service uses the Land and Water Conservation Fund (LWCF) to acquire land. Under the LWCF Act, not more than 15% of the land added is to be west of the 100th meridian, which runs through the Midwest. However, areas “specifically authorized by act of Congress” are excluded from the limit.

From fiscal years 2014-2018, we found that 80% of the land acquired was west of the meridian. Forest Service officials told us that since Congress appropriates money for the acquisitions, they believe they are authorized.

The agency has not issued a legal opinion on how to comply with the Act. We recommended it take steps to ensure compliance. 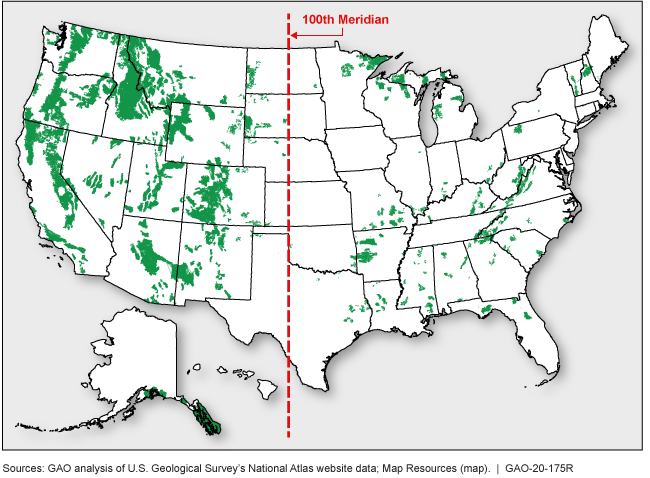 Map highlighting lands primarily to the west of the 100th meridian

The Land and Water Conservation Fund (LWCF) is a U.S. Treasury fund used by the Forest Service, in the Department of Agriculture, and other federal land management agencies for several purposes, including land acquisition. The LWCF Act of 1965, as amended, authorizes the LWCF. One of the act’s provisions limits the amount of land the Forest Service can acquire in the western part of the United States using LWCF funds. Specifically, this provision states that “[e]xcept for areas specifically authorized by Act of Congress, not more than 15 percent of the acreage added to the National Forest System pursuant to this section shall be west of the 100th meridian.” The 100th meridian is a line of longitude that goes through North Dakota, South Dakota, Nebraska, Kansas, Oklahoma, and Texas. During fiscal years 2014 through 2018, the Forest Service acquired a total of 153,228 acres using funds from the LWCF, and the majority of this land was west of the 100th meridian. Specifically, 80 percent of this total acreage (121,909 acres) was located west of the 100th meridian, and 20 percent (31,319) was located east of the meridian.

The Forest Service manages about 193 million acres in 154 national forests and 20 national grasslands that support, recreation, grazing, timber, and conservation, among other things. The agency uses LWCF funds to acquire lands that may, for example, provide increased recreational access to a trail or help consolidate land ownership within a National Forest.

This report (1) describes the location of the lands the Forest Service acquired with LWCF funds in fiscal years 2014 through 2018 and (2) examines the steps, if any, the Forest Service has taken to ensure compliance with the 100th meridian provision of the LWCF Act. To conduct this work, GAO analyzed Forest Service land acquisition data for fiscal years 2014 through 2018, the most recent 5-year period; examined relevant laws and legislative history, agency guidance, and documents such as letters sent to regional offices in 2017 through 2019 requesting LWCF project nominations; and interviewed agency officials about the 100th meridian provision.