Ship the powder to South Carolina for dilution

Ship diluted oxide back to New Mexico for disposal

These plans are uncertain because of competing demands at the conversion facility. Also, shipments to South Carolina may be delayed because NNSA is prioritizing plutonium removal from the state in order to meet a legal requirement. NNSA officials said they are working on addressing these issues, for example, by speeding up plutonium shipments out of South Carolina. 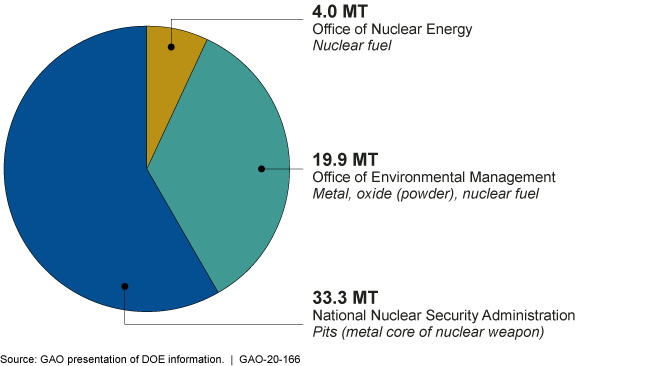 Of the Department of Energy‘s (DOE) inventory of surplus plutonium, about 43.8 metric tons (MT), or 77 percent, is plutonium metal that could be converted to plutonium oxide for dilution and disposal. Of this amount, the National Nuclear Security Administration (NNSA) manages 33.3 MT in the form of pits, DOE's Office of Environmental Management (EM) manages 6.5 MT, and DOE's Office of Nuclear Energy manages 4 MT in the form of reactor fuel. EM manages another 11 percent, or 6.4 MT, of DOE's surplus plutonium that is already in oxide form. Most of this is suitable for dilution and disposal at the Waste Isolation Pilot Plant (WIPP), a repository in New Mexico. An additional 12 percent, or 7 MT, of DOE's surplus plutonium is contained in spent nuclear fuel that is planned for disposal in a geologic repository. See figure.

The Department of Energy's (DOE) Surplus Plutonium, of Which 43.8 Metric Tons (MT), or 77 Percent, Could Be Converted to Plutonium Oxide 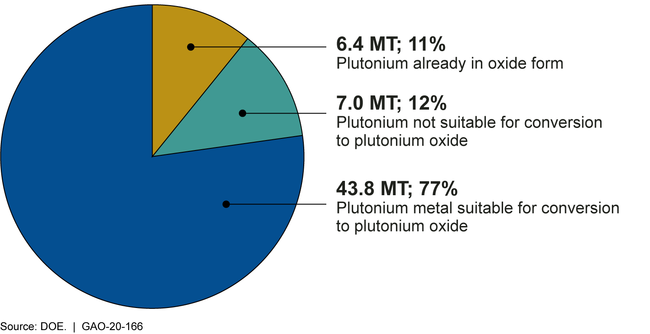 The United States has 57.2 MT of weapons-usable plutonium that it has declared surplus and that still requires disposition. This plutonium exists in various metal and non-metal forms, including pits—the central core of a nuclear weapon. To prevent insidious use of this plutonium, DOE plans to disassemble pits into metal; convert the plutonium metal to plutonium oxide, a powder-like substance; dilute it with inert material; and dispose of it at WIPP. In May 2018, NNSA issued a plan conceptualizing the dilution and disposal of 34 MT of surplus plutonium at an estimated cost of $19 billion over the next 3 decades. Under this conceptual plan, pit disassembly and production of plutonium oxide would take place at one facility and dilution would be performed in another, with both operations expanding over the next decade.