Before 2008, many health insurance plans provided lower benefits for mental health care than other types of medical care. Congress set parity requirements to help address this discrepancy. This means things like copayment amounts or treatment approval requirements must be equal or comparable for mental health and other care.

The Departments of Labor and Health and Human Services commonly find violations of parity requirements in reviews based on unrelated complaints or information. The agencies only base a few reviews on potential parity violations.

We recommended the agencies evaluate the effectiveness of their oversight approaches. 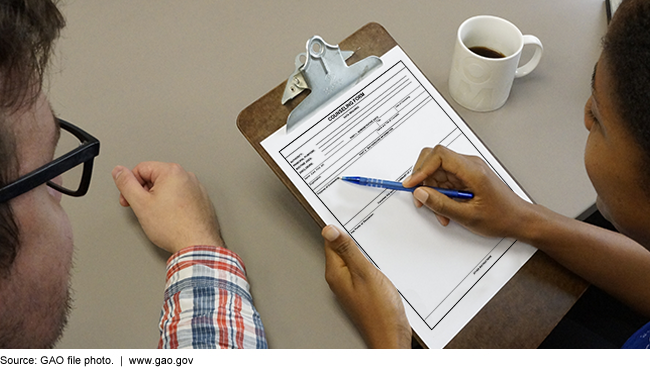 Two people reviewing a counseling form on a clipboard

The Paul Wellstone and Pete Domenici Mental Health Parity and Addiction Equity Act of 2008 (MHPAEA) generally requires that coverage for mental health and substance use disorder (MH/SU) be no more restrictive than coverage for medical/surgical services. State agencies and the Departments of Labor (DOL) and Health and Human Services (HHS) share responsibility for overseeing compliance with these MH/SU parity requirements among group and individual health plans. These oversight practices vary.

While nearly all of the state officials who responded to GAO's survey reported that they perform some review of group and individual insurance plans for compliance with MH/SU parity requirements before they are approved to be sold to consumers, states vary in the frequency and type of reviews they conduct after consumers enroll in plans. For example, officials from 12 states reported that they conducted a targeted review of specific MH/SU parity concerns in 2017 and 2018, with the number of reviews ranging from one to 22 reviews per state.

DOL and HHS conduct targeted reviews of certain employer-sponsored group plans when they receive information—such as consumer complaints—about possible noncompliance with MH/SU parity requirements or other federal heatlh care requirements. Unlike states, these reviews only occur after consumers enroll in these plans. For example, in fiscal years 2017 and 2018, DOL completed 302 reviews that included a review of MH/SU parity compliance in its oversight of 2.2 million plans. Nearly all these reviews originated from complaints or other information about potential noncompliance with federal health care laws unrelated to MH/SU parity.

According to DOL and HHS officials, the departments have not analyzed whether relying on targeted reviews alone increases the risk of noncompliance with MH/SU parity requirements in employer-sponsored group plans. Without such an evaluation, DOL and HHS do not know if their oversight is effective or whether they need to adopt additional strategies.

For this report, GAO reviewed DOL and HHS policies, guidance, and reports; conducted a survey and received responses from all 50 states and the District of Columbia about oversight practices; interviewed officials from DOL, HHS, and selected states; interviewed national and state stakeholders; and reviewed available research studies regarding health plan compliance with MH/SU parity.

GAO is recommending that DOL and HHS evaluate whether relying on targeted oversight is effective for ensuring compliance with MH/SU parity requirements or whether alternative approaches are needed. DOL and HHS concurred with GAO's recommendations.