Law enforcement officers are required to separate from service at the age of 57 if they have completed 20 years of service.

We looked at the financial impact of raising this age from 57 to 60 for the U.S. Capitol Police. Officers who choose to work longer could increase their earnings and retirement benefits; the agency could also benefit from retaining experienced officers. On the other hand, the agency would have to pay higher salaries and benefits to these officers (relative to younger officers).

We found that, even if a relatively high percentage of officers worked past age 57, it may result in only a modest increase in USCP’s costs. 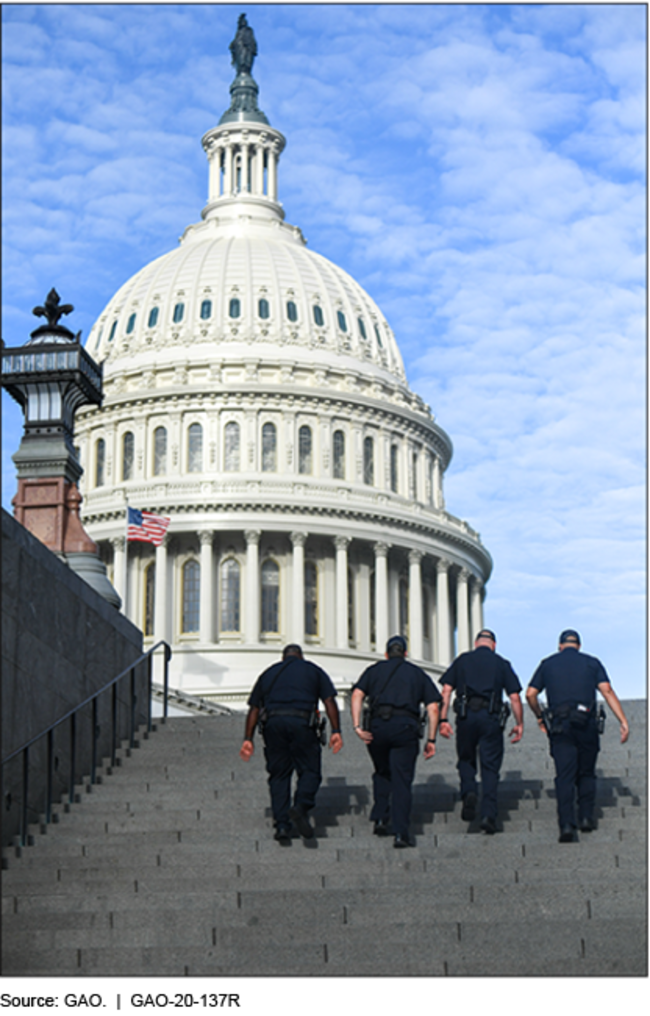 Raising the U.S. Capitol Police (USCP) mandatory retirement age from 57 to 60 would mean that individual officers who choose to work longer could increase their earnings and retirement benefits; the effects on the agency would depend upon the number of officers choosing to work additional years. For example, the agency would be responsible for higher cost salary and benefits for each officer retained after the age of 57, relative to younger officers. While it is difficult to predict officers’ future choices, even if a relatively high percentage of officers were to choose to work longer under a higher mandatory retirement age, the impact may result in only a modest increase in the average rate of pay compared to keeping it at age 57.

Separated and Retired USCP Officers by Age, 2012 through 2018 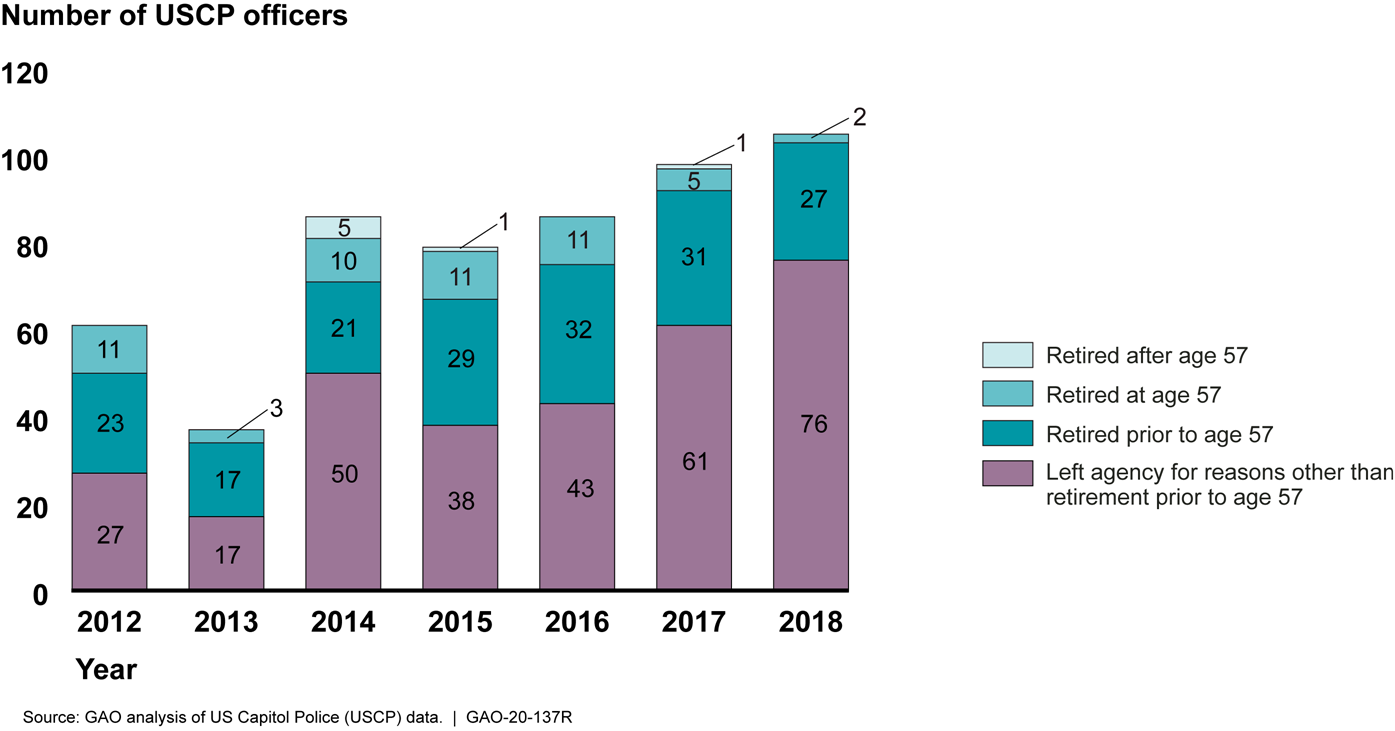 Federal law enforcement agencies generally apply what is referred to as the “young and vigorous” standard for LEOs. USCP primarily applies the “young and vigorous” standard through a maximum entry age and physical testing requirements for applicants and new recruits. For example, USCP applicants generally must be younger than age 37 at hire and must pass the Physical Readiness Test, which includes assessments of agility, upper body strength, and cardiovascular fitness. After hire, on-the-job observation is used to monitor officer fitness.

The effects of raising the mandatory retirement age across federal executive branch law enforcement agencies would likely vary. GAO interviewed officials from nine selected agencies whose federal law enforcement officers (LEOs) account for almost 85 percent of the total federal executive branch LEO workforce. Officials in these agencies expressed varying opinions on the potential effects of raising the mandatory retirement age. For example, officials from five agencies said they would view raising it to age 60 as a potentially positive change, citing various benefits such as the ability to retain experienced officers to assist in on-the-job training for more junior officers. However, officials from one agency said they would view the change more negatively, because of the added cost of retaining LEOs with higher salaries.

In its comments, USCP expressed the view that the report does not adequately address certain implications of raising the mandatory retirement age that could compromise its ability to fulfill its core mission to protect the Congress. However, irrespective of a change to the mandatory retirement age, we believe that USCP would be able to ensure it is able to fulfill its core mission by determining the appropriate physical requirements for officers after hire, consistent with its current practices for applicants and new recruits.

The mandatory retirement age requirements in federal law generally require federal LEOs to separate from service at the age of 57 if they have completed 20 years of service; however, agency heads may exempt officers from this requirement up to age 60 if they determine the public interest so requires. USCP officers, although not included in the definition of LEOs, are subject to similar mandatory retirement age requirements.

To address these objectives, GAO analyzed data including USCP officer retirement and attrition from 2012 to 2018; USCP’s use of mandatory retirement age exemptions and waivers from 2002 to the present; and OPM’s Enterprise Human Resources Integration database (a database that includes demographic and retirement characteristics of executive branch federal LEOs). GAO interviewed officials and obtained documentation from USCP, USCP’s labor union, and nine federal executive branch agencies with large LEO populations within the Department of Justice, the Department of Homeland Security, and the Department of the Interior. GAO also reviewed relevant federal laws and regulations, and spoke with officials from the Office of Personnel Management (OPM) about agencies’ policies and practices for allowing LEOs to work beyond age 57.