Nationwide, irrigation consumed 20-30 trillion gallons of water in 2015. Most irrigation is in the West, where water is relatively scarce and precipitation low.

The 3 main irrigation technologies—gravity, sprinkler, and micro—can all be modified to be more efficient and save water. But in practice, farms may use such water savings to increase yield, switch to thirstier crops, or irrigate more land.

To address water scarcity, federal policymakers could offer incentives to use more efficient technology or practices, in return for farmers’ agreeing to reduce water consumption.

Irrigation and water scarcity across the contiguous United States 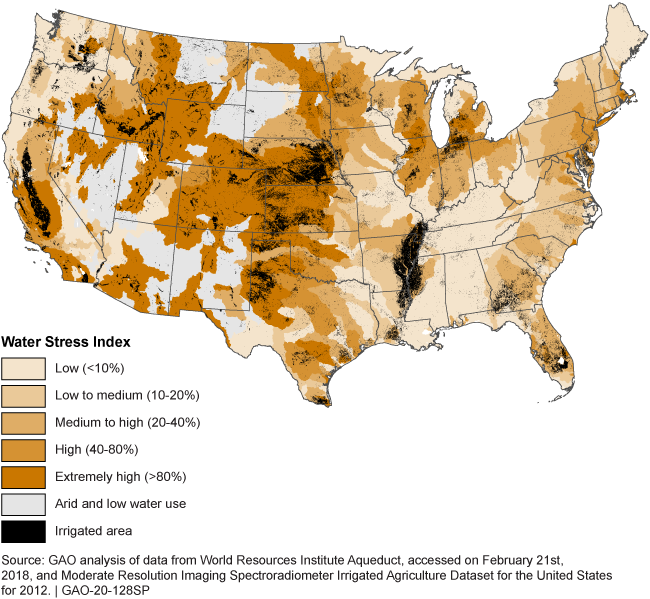 In the United States, irrigation accounts for more than 40 percent of freshwater use. Several areas in the nation are both heavily irrigated and considered water stressed. Farmers can select irrigation technologies and water conservation practices to better manage freshwater, an increasingly limited natural resource. Farmers have access to multiple irrigation technologies that could increase efficient use of water. Irrigation technologies include micro irrigation, which applies small amounts of water close to the plants; sprinkler systems, which spray water through nozzles; and gravity systems, where water floods the field or runs down furrows. In addition, practices such as irrigation scheduling may help farmers avoid over-irrigation. Farmers can also use precision agriculture technologies, such as soil moisture sensors, computer or smartphone decision support tools, and remote control of irrigation equipment to help optimize irrigation scheduling. 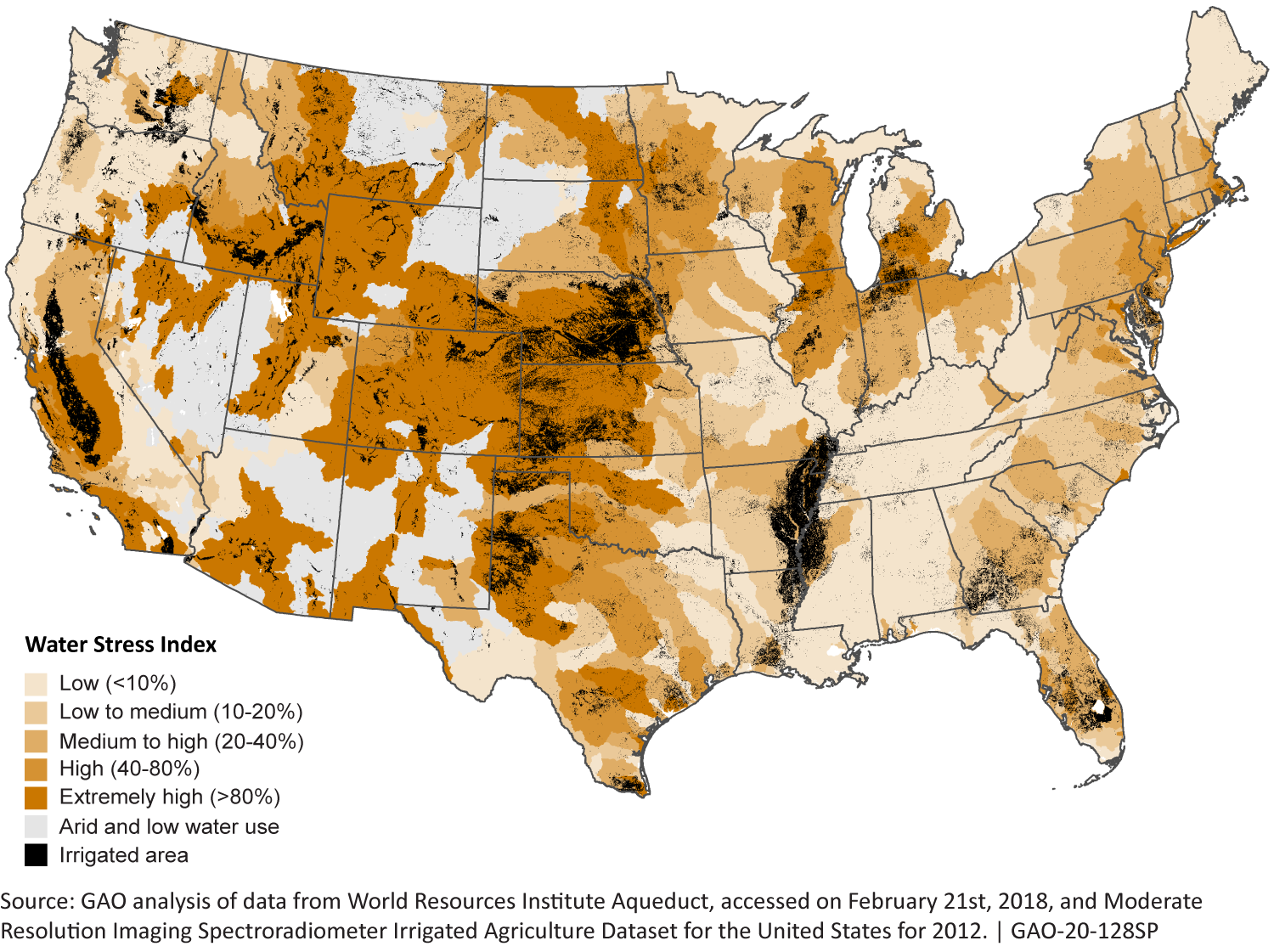 Farmers adopt and use efficient irrigation systems to maximize farm-level profitability, through improved crop yields and decreased costs and other inputs. Drivers of farmer adoption of irrigation technology include increasing profits and reducing risks, but we did not find much evidence that conserving water was a factor in adoption of technology. Barriers limiting adoption of more efficient technology include small farm size, large capital investments, and lack of available information on the technologies. For precision agriculture technologies, lack of connectivity, such as access to broadband, can be a barrier, particularly in rural areas.

Farmers’ use of efficient irrigation technologies alone may not conserve water. GAO’s modeling of an illustrative irrigated watershed shows farmers’ use of efficient irrigation scheduling—such as using data from soil moisture sensors to schedule irrigation—can reduce the amount of water applied to the field, resulting in less water withdrawn from a source, which in this model was groundwater. At the same time though, GAO’s modeling shows water that is consumed through evapotranspiration does not change with efficient irrigation scheduling, while return flows to the source bodies of water may be reduced. While, in some instances, reduced return flows may be beneficial, as such flows can convey pollutants downstream, reduced return flows may also result in less water available to downstream users. 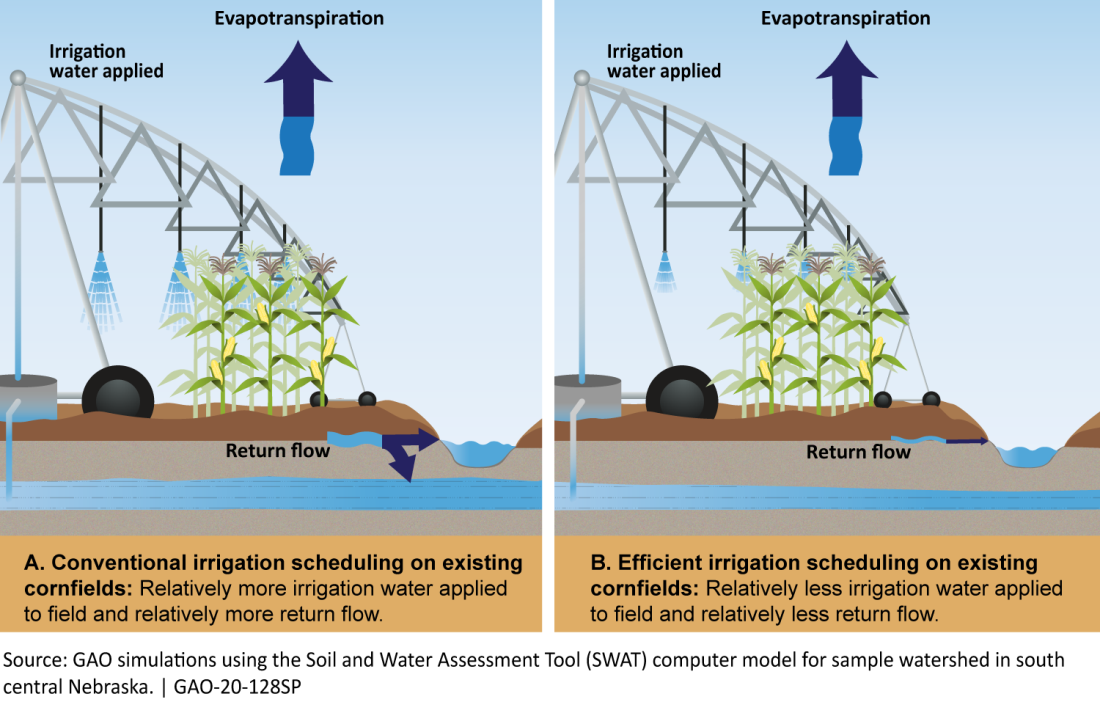 GAO’s analysis of survey data on farms that converted to more efficient irrigation systems shows there is no change in the amount of water farmers apply to a field with more efficient technology, except for a few technologies and crop types. One such exception is in orchards and vineyards, where switching to micro irrigation was associated with less water applied per acre. Efficient technology may actually increase water use, as it provides farmers with additional flexibility to expand irrigated land or to switch to more water-intensive crops.

The request for GAO to conduct this study specified a policy goal of reducing the impact of irrigated agriculture in locations facing water scarcity in the United States. With that goal in mind, GAO identified the following options federal policymakers could consider:

(1) Promote the use of more efficient irrigation technology and practices, such as irrigation scheduling.

(2) Promote the use of precision agriculture technologies, such as soil moisture sensors and weather stations.

However, in light of GAO’s findings, these options may need to be combined with appropriate agreements in order to enable and encourage water savings. Such agreements could include incentives to farmers for conserving water. Both policy options have the potential benefit of reducing the amount of water applied during irrigation. However, challenges include ensuring that water savings on the farm translates to water conservation on the larger watershed level.

Demand for freshwater surpasses the amount naturally available in some areas of the United States. The agriculture sector competes for this limited resource, and withdraws and consumes the most freshwater of any user in the nation. GAO was asked to conduct a technology assessment around agricultural water use.

This report provides an overview of irrigation technologies and on-farm water conservation practices, factors influencing the adoption of these technologies, and implications of their use for water scarcity.In conducting this assessment, GAO reviewed scientific literature; convened an expert meeting with the assistance of the National Academies; visited farmers, academics, and industry representatives; interviewed officials from federal agencies; modeled water use in an illustrative watershed; and performed a regression analysis on U.S. Department of Agriculture irrigation, crop, and technology data.

GAO describes two policy options that federal policymakers could consider relating to irrigation technology and discusses their benefits and challenges.