People whose disabilities keep them from working can apply for Social Security Disability Insurance. People who claim these benefits may also be on prescription opioids for chronic pain. Opioids are addictive and can be misused.

Social Security staff must deny claims if claimants who stopped using drugs or alcohol would be employable. Staff in 5 of 6 offices we visited were confused about when to evaluate a claimant’s substance use.

In more than half the cases we reviewed, the evaluations weren’t fully documented.

Our recommendations are to help staff improve the evaluation process. 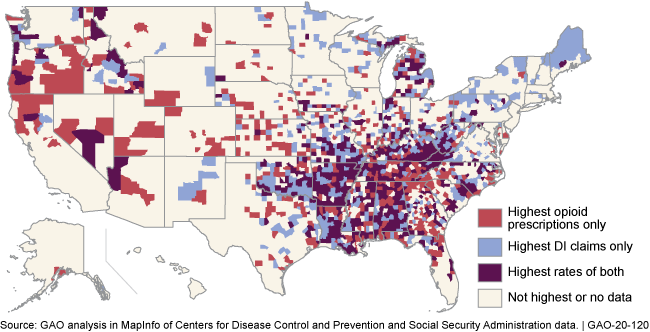 U.S. map showing highest rates concentrated in the southeast with other clusters across the U.S.

The numbers of opioid prescriptions and claims for the Social Security Administration's (SSA) Disability Insurance (DI) program have each declined nationally in recent years, but rates vary widely across the country. National trends show both peaking between 2010 and 2014 and then declining. GAO's analysis shows counties with the highest rates of both were concentrated in the Southeast (see figure). After accounting for economic, demographic, and other factors, GAO found that counties with higher rates of opioid prescriptions tended to have higher rates of DI claims from 2010 through 2017. These rates were also correlated with other factors. For example, counties with higher rates of each tended to have higher poverty rates. However, GAO was unable to determine whether there is a causal relationship between rates of opioid prescriptions and DI claims or other factors, given readily available data.

Counties with the Highest Rates of Opioid Prescriptions and Disability Insurance (DI) Claims (In the Top Third of the Distribution for Each Rate), 2017 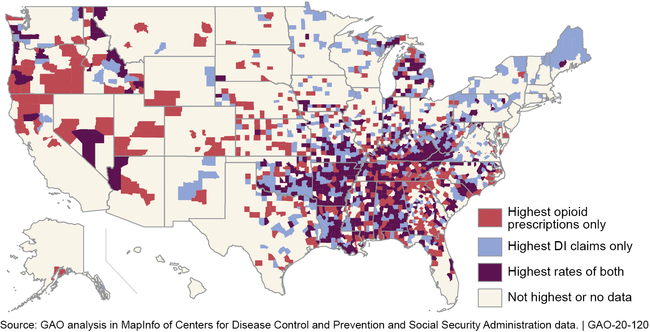 Program staff are required to evaluate and document substance use disorders (including opioids not taken as prescribed) when making certain DI eligibility decisions. Specifically, staff are required to evaluate potential substance use disorders for certain DI claims and deny benefits, for example, if the claimant would not be considered disabled if they stopped using drugs or alcohol. In addition, staff are generally required to document the rationale for their decision so that another reviewer can understand how they made the decision. However, staff in five of the six offices GAO visited in three states were confused about when to evaluate substance use disorders, and nine of 15 case files that GAO reviewed in which an evaluation was conducted did not have a documented rationale. SSA officials acknowledged the need to clarify policies on when to evaluate substance use disorders, and that a poorly documented rationale could lead to reversals or remands of decisions. Without ensuring that SSA's policies are understood and that staff document their rationale, the agency may expend resources re-working cases and, in turn, delay benefits to individuals eligible for assistance.

The United States is in the midst of an unprecedented opioid epidemic. Opioids are prescribed to treat conditions such as chronic pain. However, opioid misuse can lead to addiction, disability, overdose, and death. Prior GAO and other reports have discussed the use of prescription opioids within federal programs, particularly Medicare. Less is known about the use of opioids in relation to SSA's DI program. GAO was asked to review any correlation between prescription opioids and rates of DI claims, and any related challenges for SSA.